Mobile and E-Commerce: Email and Direct Traffic Drive Most Sales

Customers responding to email marketing and shoppers navigating directly to online stores (including app traffic) accounted for the highest share of purchases on phones in the first quarter of 2014, according to a recent report from Custora.

Direct traffic also drove a larger share of purchases on mobile phones compared with desktop, with one-third (32.9%) of sales coming from shoppers who went straight to online stores/apps.

On tablets, paid search was the leading marketing channel in 1Q14, driving 24.8% of sales. 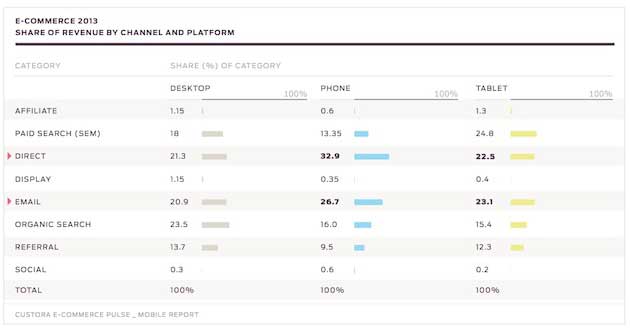 Below, additional key findings from the report, which was based on US e-commerce data from over 100 retailers, 70 million consumers, and $10B in transaction revenue.

In the past four years, the percentage of traffic to e-commerce sites from mobile devices (phones and tablets) jumped from 3.4% to 36.9%. 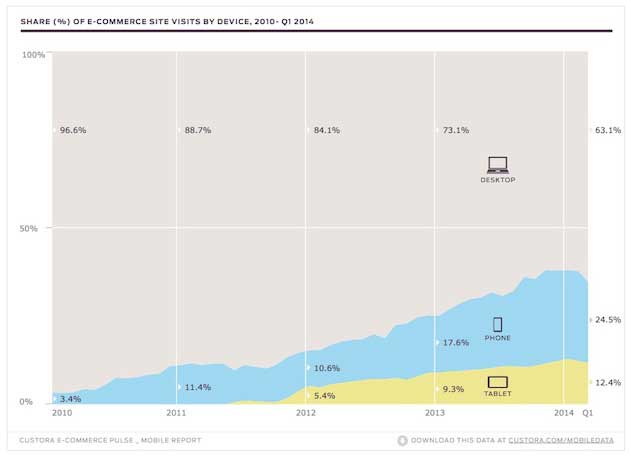 Consumers spent the most time on e-commerce sites when accessing via desktop computers (3:39 minutes on average); tablet users spent a little less time on site on average (3:16); and consumers using their phones spent the least amount of time on site (2:13). 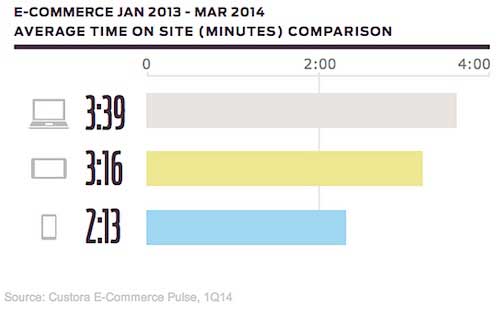 About the research: The report was based on 1Q14 US e-commerce data from over 100 retailers, 70 million consumers, and $10B in transaction revenue.