How to Make Print Ads Work

In designing or approving print ads, here's a good rule of thumb: think two seconds. On average, people look at a print ad for no more than two seconds (see Giep Franzen, Advertising Effectiveness: Findings from Empirical Research. NTC Publications, Oxfordshire, 1994). That is a chillingly short time to hook them with a seductive sales pitch. Your ads have to become “two-second hookers.” 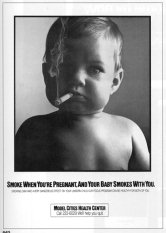 It takes something special to make your ad cut through—to stop people scanning and pay attention. High impact visuals are often the key.

Visuals are often better “hookers” than headlines, because in 90% of cases people look at the visual before the words. About 1.5 seconds of the two seconds spent on the average ad is devoted to the picture, and only about 0.5 seconds to the copy.

Visuals also communicate faster than words. In the same time it takes us to mentally process a visual, we can read only about 10 words. But when using visuals to cut through, don't lose sight of what follows. The ad must also communicate the brand and deliver a positive message. So, the high-impact visual should also reinforce the main message—not just get attention.

In other words, the visual should do double duty—like the antismoking ad aimed at pregnant mothers. A smoking baby is not only visually arresting, it powerfully reinforces the main message of the headline: Smoke when you're pregnant, and your baby smokes with you.

In going for attention, don't lose sight of the other things that the ad must do if it is going to work.

Beyond the reinforcing of a positive message, here are three more guidelines.

1. Watch out for negative side effects

An ad for Trident spaghetti has a naked man lying in a bathtub filled with Trident spaghetti. It sure gets your attention. But who wants to eat spaghetti associated with some guy bathing in it? Watch out for such unintended associations.

Here's how they can creep in. An ad for a computer shows a tortoise alongside the computer, and this odd juxtaposition commands attention. The visual does double duty because tortoises live a long time and so reinforces the “heritage” message that this brand has been around a long time. Tortoises, however, are also slow—an unintended side effect, and not something you want to risk having as an association for a computer brand.

Especially watch out for clashes with user image. Take this ad for an online jewelry retailer. The headline reads: “Trust us, a food processor won't get you there.” Ostensibly aimed at males, the visual is guaranteed to get attention, and it may well sell jewelry—to males.

But how about females? What does it say about the wearers of gifts bought through jewelry.com? Chances are, this ad would alienate many females.

Another example is this ad with an old lady drinking a bottle of Stella Artois beer. An old lady drinking beer is unusual! As is the color contrast in the ad. It gets A for attention, but what about the effect on user image for the brand? How does the typical male beer drinker relate to this user image of his brand? My bet is, he doesn't.

3. Watch out for brand disappearance

Lack of effective branding is one of the most common side effects. Attention is worth nothing unless you also get correct branding. It goes without saying that the brand needs to be highly visible, but it is still surprising how often this tenet is violated—frequently in the name of so-called creativity.

Consider the ad shown here, with 5 guys looking up into a eucalypt tree. The device is clever and creative, because when people are looking up it is almost irresistible that we have to look also—to see what they are looking at.

But what's it an ad for? What's it about? Not until you find the tiny logo for Stihl chainsaws in the lower corner does it begin to make sense. Even in full-page size, lack of brand prominence means that you would have to work hard at this ad.

How many readers stay with it long enough to discover, “Aha… the football is stuck in the tree!” And how do they get it down? The answer (implied by the ad) is to use a Stihl chain saw!

Apart from the risky strategy of hiding the brand in the corner and making the reader work hard, this ad dices dangerously with some negative associations. Cut the tree down? Cutting down trees is not a positive message to push these days, and doing it for frivolous reasons… even less so.

So, feature the brand prominently, but even better— integrate it into the visual execution. Rather than just inserting it, make it integral to the ad. Branding is most effective when the brand is visually integrated into the execution rather than just being added on.

Dr. Max Sutherland is a marketing psychologist who works as an independent marketing consultant in Australia and the United States. He is the author of Advertising and the Mind of the Consumer and an adjunct professor at Bond University in Australia. You can reach him at msutherland@compuserve.com.

You may like these other MarketingProfs articles related to Graphic Design: