Forget the Funnel, Use the Sales Radar to Find the Invisible Sale

In my earlier days, as a vice-president of business development, I once had to call on a prospect 52 times before our agency was invited to pitch for anything. But the last client I picked up at my current firm took exactly one call and a meeting over beers.

So what am I doing differently today to create that streamlined, one-meeting-and-a-beer pitch? Simple, I stopped being limited by my sales and marketing database. Instead, I embraced a content-marketing powered, data-based approach more appropriate for today's digitally centric buyers.

And now, instead of spending all of my time "working my funnel," I invest that time creating and distributing helpful content that can be found by B2B buyers looking to educate themselves on marketing problems my firm can help them solve.

Let's be clear. I'm not advocating that you destroy your sales and marketing database or cease all traditional outbound sales prospecting efforts. Yes, they're inefficient, but they do work; and you'll need to keep driving biz-dev while you're creating your own painless prospecting platform.

But you'll need to switch sooner rather than later if you hope to compete in today's "invisible sale" world.

Today's prospects are hiding behind the anonymity of a Google Search, with 77% (according to a DemandGen 2012 Report) indicating they do their online research before contacting any vendors. That same report noted that over half of those buyers claimed they proceeded to short-list development before contacting any vendors. Meanwhile, a Corporate Executive Board Study found that buyers are 57% of the way through the buying cycle before they reach out to companies they are considering.

So ask yourself how many of your company's prospects are online right now trying to find information to help them make a buying decision.

To find and acquire these self-educating buyers, your company needs to set aside your traditional funnel-based sales mentality. Instead of seeing your selling process as a funnel to be filled at the top with unqualified prospects that you'll push through the funnel, picture it instead as a sales radar constantly pinging the world around you to identify and qualify sales prospects. 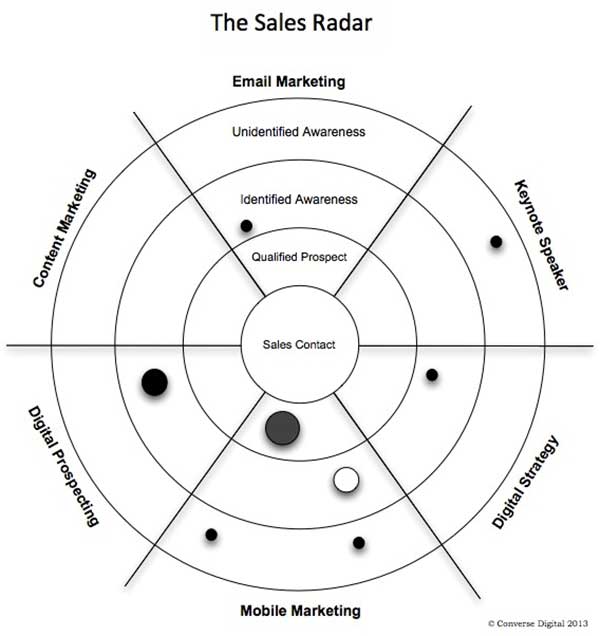 Selling something to a prospect is a lot easier when you know what they want to buy. And that is the power of a sales radar approach. Unlike the sales funnel approach, in which you are actively qualifying a prospect with outbound phone and email efforts, the sales radar tracks and records the prospect's online behavior, which is often a far more accurate picture of true wants and needs.

The biggest change you have to wrap your head around is that the sales radar is organized on a horizontal rather than vertical axis. The second-biggest difference is how prospects are organized within the radar. The radar view plots prospects on three axes instead of one (which level in the sales funnel they currently occupy). Sales radar companies plot prospects on the radar based on three key data points:

All of this information is captured and saved in your business development CRM tool and used to create detailed dossiers on each prospect. As you review these dossiers, you are able to sense when a prospect becomes a true biz-dev lead, at which time you can then begin strategically targeted outreach, assuming they haven't already contacted you to learn more about your products and services.

Ten years ago, this approach wasn't possible. The technology simply didn't exist at a price point that most companies could afford.

But today, with a host of marketing automation tools and Google's own free analytics offerings, the ability to track and target self-educating buyers is not merely possible but is a necessity for every company.

Hopefully, this article has set you on the right track. But if you'd like to learn more about creating your own sales radar, feel free to go download a free chapter, from my new book, The Invisible Sale, where I dive much deeper into this important strategic inflection point and discuss actionable strategies to help your company adapt.

Tom is presenting at the MarketingProfs B2B Forum this week. He's speaking on "Leveraging Data-Based Marketing to Find and Win the Invisible Sale." Join him online.

Tom Martin is the founder of Converse Digital and author of The Invisible Sale. He teaches companies how to increase sales, enhance brand perception, and take the pain out of prospecting.