Writing and Readability Scores: It Matters

Creating high-quality content is more important than it's ever been, thanks in part to the recent infamous algorithm updates by Google.

Now, when creating a blog post, article, or any other written content, you must make sure that it's not only highly relevant to your audience but also specifically tailored for them—its language, in particular.

Some Best-Practices for Writing for the Web

Writing for the Web uses skills, language, and design elements that are different from those used for print. Before we discuss readability, let's have a look at a few of the basics of text for the Web:

Flesch-Kincaid was developed by Austrian-born Rudolf Flesch, who fled to the US to avoid the Nazi invasion. He was a readability expert who studied law in his home country before going on to graduate from Columbia University with a PhD in English.

Flesch was also a writing consultant and created the Flesch Reading Ease test, and he was the co-creator of the Flesch-Kincaid readability test. He was one of the earliest proponents of writing in plain English.

When someone is reading, the mind and eyes focus on "successive points," allowing for a tentative judgment to be made in the mind of the reader as to what the text means up to that point. Natural breaks in the text, such as punctuation marks or new paragraphs, allow the mind to re-evaluate the text up to the point, when the mind stops for a split second, until it eventually arrives at the final meaning.

The longer the word, sentence, or paragraph, the longer the brain has to suspend comprehending ideas until it can reach a point where all of the words make sense together.

Because they require more mental work by the reader, longer words and sentences are harder to read and understand.

The Flesch-Kincaid formula requires you to count words and syllables in order to measure the amount of mental work that may be required by the reader. On a scale of 0 to 100, 0 is measured as the most difficult, 100 the easiest.

To use the formula, count the length of each of the following:

Then divide the average number of syllables per word, words per sentence, and average sentence length, and score using the following image: 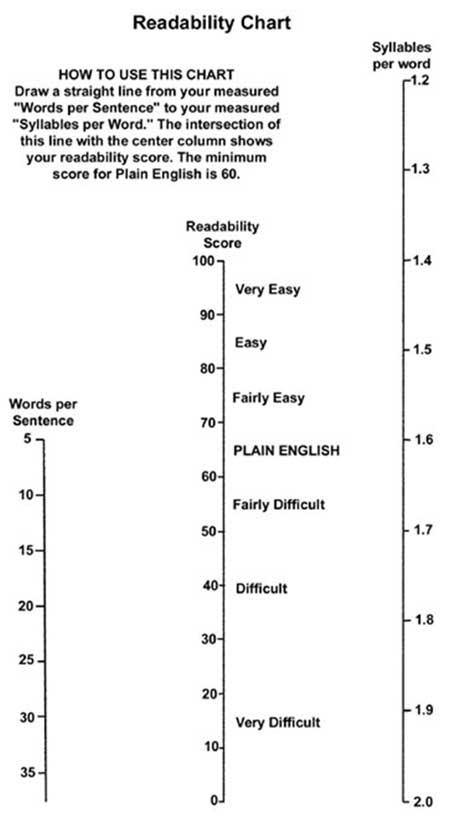 You can work out the readability score by taking a ruler and connecting the two figures that you have for sentence and word length; where the line crosses the figure in the center column is your readability score.

So, multiply the average sentence length by 1.015, average word length by 84.6, add the two numbers, and then subtract that total from 206.835 to arrive at the readability score.

If a text's readability score is...

You may think that you're insulting your readership by sticking to a score of around 60, but you're not; you're just writing in plain, understandable English.

When we read on a monitor, we don't behave in the same way as when we're reading a book or magazine. We tend to scan a lot more, so shorter words and sentences become even more important.

Flesch recommends that the score of the average conversational piece aimed at consumers be a minimum of 80 (approximately 15 words per sentence and 1-1.5 syllables per word).

Examples of average scores for various types of content:

As you can see, the scores differ according to the target audience. Harvard Business Review assumes a readership with a certain level of education. An insurance policy will include a lot of industry-relevant language and so has a very low readability score.

Microsoft Office products include a readability scoring tool based on the Flesch-Kincaid formula. To enable it in Word...

Go to Options > choose Proofing > ensure that the grammar with spelling box is checked > select the tick box for Show readability statistics. 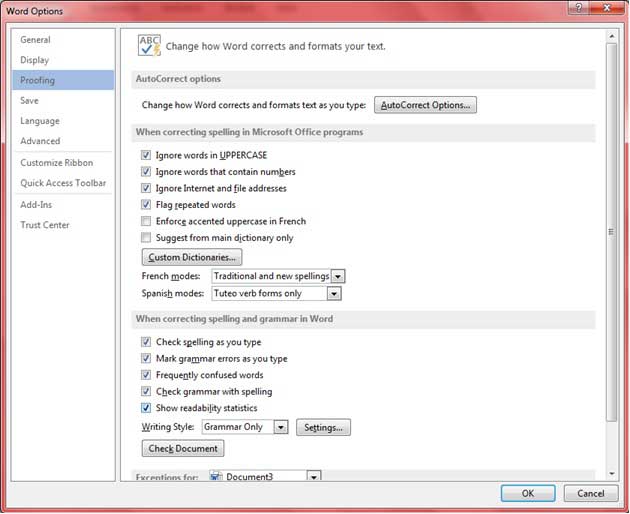 When checking the document for spelling and grammar, you will see a box displaying statistics and scores. 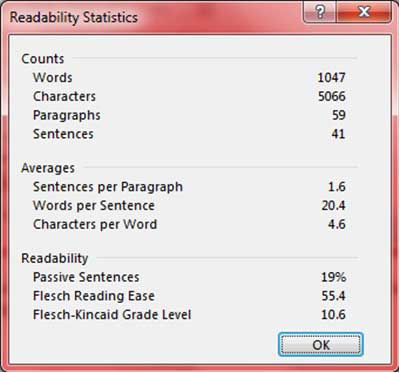 If you've finished your post only to find it has a readability score of 20, say, you can address the issue during editing. Consider breaking up long sentences into one or more smaller sentences, and cut out words of over three syllables

Flesch maintained that there are no complex, legalistic words that can't be translated into plain English. In Word, use the synonym function to help you choose similar words if you get stuck. You can do this by right-clicking on the offending word and choosing a synonym; Word will bring up a list of alternatives. For example:

That was the list of words given as alternatives to the word "convoluted"; as you can see, you have the further option of using the Thesaurus should you still be stuck for a better word.

It's also a good idea to use contractions such as don't and they're. Another idea is to use two-word combinations such as on-site instead of at the customer's workplace.

In short, the key to authoring good content is to use language that doesn't detract from your message.

Grant Draper is a writer with a love for business and startups, and a content marketing manager at Heating Force. Connect with him via email: grant@grantdraper.co.uk.