When you build a brand community, you attract attention from more than just your fans. The powerful voice and extended reach that consumers gain on social platforms can amplify both brand advocacy and brand criticism—warranted and unwarranted.

"How-to" tips on managing community trolls are relatively prevalent, but many of the espoused tactics backfire in real-world settings because they're too broad and not deep enough. They're materially tips for dealing with negative comments and sentiment, but the don't really help with understanding and managing trolls as people.

Understanding causation—the underlying motivation of different troll types—and the impact trolls seek to have on other people, is essential to understanding how to best proceed.

I'm going to discuss three primary troll types: scorned fans, soapboxers, and scandalmongers. And to ground the discussion in the real world, I'll use some recent activity from Chobani and Porsche as examples of do's and don'ts of effective troll management.

One consistent theme we'll emphasize is the value of brand defenders, which are advocates who can often directly negate trolls in ways that the brand itself cannot. Such authentic advocates can't be pulled out of thin air, however; they need to be recognized and cultivated beforehand.

In a negative spiral of publicity, category leader Chobani Yogurt was facing increased backlash regarding genetically modified organisms (GMOs) in the feed for the dairy cattle that provided milk for the company's yogurt. That backlash was compounded by its breakup with Whole Foods that was subsequently attributed to the negative GMO buzz.

The breakup then not only emboldened Chobani's critics but also drove negative attention to the brand from customers, simultaneously positioning the Chobani social communities as friendly camping grounds for GMO protesters.

Reportedly 90% of all US cattle feed contains GMOs, and Chobani is in good company, with primary competitors Yoplait and Oikos among them. Interestingly, neither competitor faced anywhere near the same amount of backlash, making Chobani an excellent case study in how to stay ahead of the trolls.

Fans who have a complaint and who feel scorned—especially if former brand advocates or potentially such advocates—usually hold a lot of sway with other fans. Their opinions may bring in others who tag along with the complaint.

Losing loyalty in such situations is most immediately tied to losses at the cash register. This isn't just an issue of a missed expectation; this is a case of betrayal of trust.

Trolls of this nature aren't just the consequence of a faulty order; they're born when their defective order is replaced with subsequent broken refurbs. Such was the case when Nick Murray saved for years to buy what he thought was his dream car, a Porsche 911, only to end up with a lemon. He took to YouTube when he felt Porsche wouldn't respond, and he generated millions of YouTube views highlighting his disappointment. 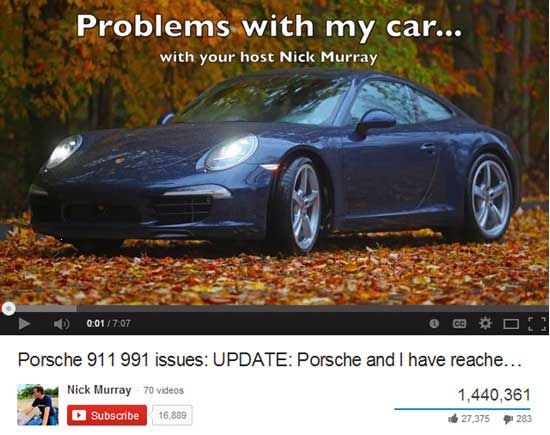 As is typical, this former advocate felt an emotional stake in the company and identified with a value that the brand represented to him; he then felt that the brand betrayed both that value and him.

Do not let comments spiral out of control! In Chobani's case, fans who previously bought into the brand's "all-natural" marketing felt betrayed by the GMO news and spoke out against the company. 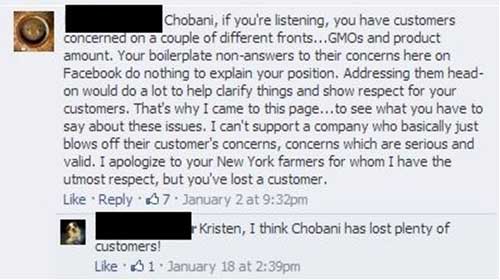 Chobani took the ostrich approach, sticking its head in the sand and hoping the problem would go away despite all evidence that it was gaining steam—so much so that the trolls were out in full force months after the fact.

The brand had some advocates willing to come to its defense, but it didn't do a good job championing or cultivating them, and the posted content that was very likely to bait trolls while the issue was at a tipping point.

Chobani let the situation heat up, and that likely contributed to the Whole Foods decision, which further fueled the fire.

Understand whether the company has done something wrong that can be fixed; and, if so, admit it, be candid, and be decisive in fixing it.

In the case of the most influential former or potential brand fans, react to their comments immediately with a direct response from your brand, and don't sidestep the issue. If it's misinformation, address it. Address it publicly, and direct the user to follow up privately.

If you resolve the issue publicly and they're very happy with the resolution, consider asking whether they'd like to update their initial post or product review.

Some commenters are so passionate about a topic that they will voice their opinion regarding it regardless of their comments' direct relevance to the specific topic at hand. 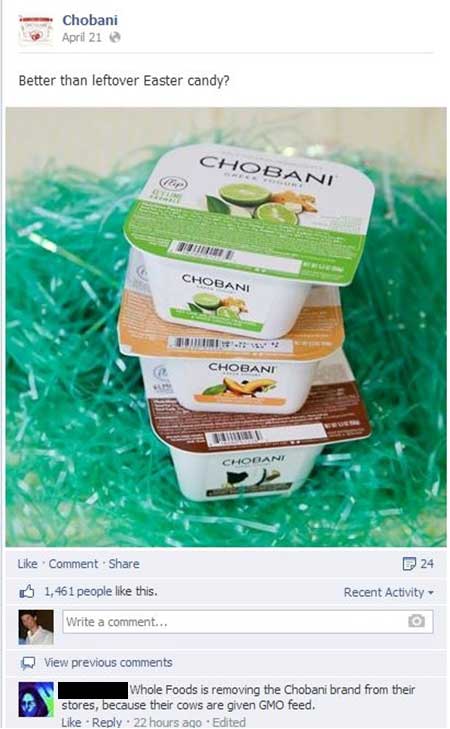 Understand that these people are not your customers. You are the unwitting camping grounds of these occupiers.

Do not debate, do no try to prove them wrong in the details, and do not try to win them over to the merit of your brand. The old adage of wrestling with a pig holds true: You'll both end up dirty, but the pig will like it.

Definitely do try to understand whether they're driving influence with your real customers, and address the issue accordingly.

Respond publicly with the offer of more information, not with an invitation to debate. Create a formulaic response that directs them to information off-page and provides them with a way to contact you directly, perhaps through email, if they have any questions after reading the information. Trolls will likely respond and try to egg you into another response; don't give them one (even if you know you're right). It might seem as if you're losing the battle, but you'll win the war.

This approach takes conversation off-page; it doesn't have your brand engaging in off-the-cuff comments, and it deflates the troll's enthusiasm. In additions, it shows your real fans that you do have a response, giving them bullet points of information to start to come to your defense. Chobani eventually did so in a well-worded post, but not until long after its competitors had spoken up and the trolls had dug in deep.

If you've fostered good brand advocates as a part of your strategy, they're going to be incredibly valuable now in both directly refuting the trolls and in steering conversations away from just the soapbox issue. The credibility of an informed brand defender such as the dairy farmer in the following Facebook post carries tremendous clout. 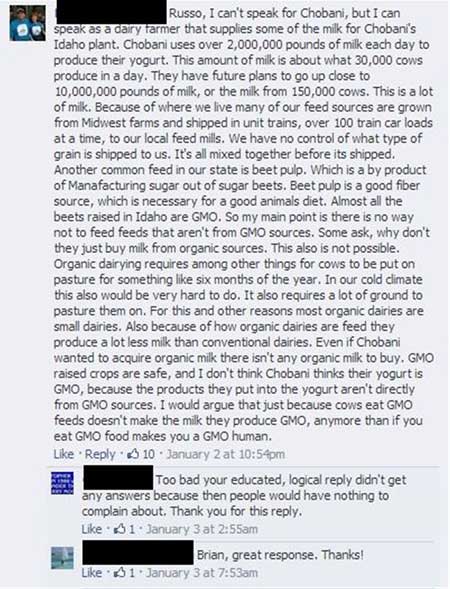 As a brand, pick your spots to encourage your defenders. Thank them for their opinion, for their well-worded comment, and show them they're appreciated. If a brand defender gets confrontational or rude with a soapboxer, though, stay out of it. You want to seem grateful for the support, not as if you're egging on a confrontation.

Scandalmonger trolls love to spread bad news and they love the limelight. Their motivation is to draw attention to themselves and frustrate people for their own entertainment. Accordingly, they're typically impossible to reason with or appease.

Engaging directly with these trolls only solidifies their platform and invites further trolling. They're very different from soapboxers in that they aren't really motivated by something they care about, and they may not even truly believe what they're saying. Offering more information isn't really helpful, since there's no conversation to be had off-page; they're just looking to start some trouble and have fun. Once you nibble at their hook, you're part of the show for them.

Ignore their commentary if possible, and let the lack of validation drive them away. They'll leave when they're bored, not when they've been convinced they're wrong.

Keep in mind that banning people and deleting comments can often be the third rail of troll management. For scorned fans and soapboxers, the blowback, even from brand fans, can be substantial, and it can feed the fire. Scandalmongers, however, can be a different story, particularly in cases where they cross a line and are offensive, confrontational, and insulting (to other fans, not the brand). In such cases, most fans not only understand but also expect that you will banish the offender.

Make sure you're definitely dealing with an across-the-line scandalmonger before taking the nuclear option, however.

Dangerous Even When Understood, Deadly When Ignored

Trolls are inevitable; but, as the forking paths of Chobani and its competitors illustrate, the level of impact they have on your brand can vary greatly. Tipping the balance in your favor depends primarily on how energized your trolls are versus your advocates; also, most of the approaches discussed in this article can effectively work to tilt the scales in your favor.

At Crowdly, we looked at Chobani by using our platform to calculate troll-to-advocate activity at the height of this storm: On average, each troll commented 11 times per week, whereas only 13% of advocates came back after one comment. For perspective, consider these numbers: In the case of a 100 participants consisting evenly of 50 trolls and 50 advocates, you'd see 550 negative comments and 65 positive ones.

Ironically, a sudden influx of engagement on your posts from trolls can boost certain KPIs and will actually have a positive impact on Facebook's EdgeRank and organic reach, but when you scratch beyond the surface measurements it becomes clear that that's the type of attention marketers don't want. Make sure some qualitative metrics are part of your mix.

I want to emphasize the importance of understanding the context and background of fan interactions with your brand, and the need to build and foster your advocate base now. As the saying goes: you can't make friends on moving day. Your ability to react quickly with credibility and fans on your side when trolls strike will make all the difference.

How do you manage trolls and advocates in your community? Are there any success stories or cautionary examples from other brands worth sharing? Connect with me in the comments below or via Twitter: @danielmsullivan.

Dan Sullivan is the founder and CEO of Crowdly, an advocate marketing platform that connects large brands to an owned channel of their best, authentic customer advocates at scale.