This article is based on excerpts from Everybody Writes: Your Go-To Guide to Creating Ridiculously Good Content (Wiley, September 2014).

The writer Andre Dubus (House of Sand and Fog) has described writing as inching your way along a very dark, very long tunnel: You can make out the next few feet in front of you, but you're not quite certain where you'll end up or when you'll get there.

For me, at times, writing can feel like birthing a Volkswagen.

What helps with the uncertainty and enormity of the task is to start with some kind of process to guide the way—necessary checkpoints toward that final piece or the beacons that guide the entire effort.

Process is one of those things that in many parts of life I consider hopelessly boring and mind-numbing. Like peeling the skins of raw tomatoes—or scrubbing dirt from beets.

But in writing, process is necessary because you need a road map to get you to where you need to be—essentially, a kind of writing GPS that gets you from discombobulated thoughts to a coherent, cogent piece of writing that others can understand and appreciate.

What works for me is the process I outline here. Maybe it will inspire you, too. In any event, I suggest you find some process: Good writing takes planning and preparation; it doesn't just emerge, fully formed, as if from the head of Zeus. Or your own head, for that matter.

What follows is an outline of a 12-step process for relatively long text you might produce—blog posts, e-books, whitepapers, site content, and the like. It's the process I use to write any post that appears here on MarketingProfs or AnnHandley.com, and I use it to create my monthly column in Entrepreneur magazine. Also, I've used it to cobble together the bones of video scripts and presentations, as well as longer memo-style emails.

I dig into each one deeper in Everybody Writes, but here's the CliffsNotes version.

1. Goal. What's your business goal? What are you trying to achieve?

Anything you write—even an individual blog post—should be aligned with a larger (business or marketing) goal.

Let's say your goal is this: I want to drive awareness of and interest in the launch of our incredibly cool new collaborative editing software because we want to sell more of it.

2. Reframe. Put your reader into it.

Reframe the idea to relate it to your readers. Why does it matter to them? What's in it for them? Why should they care? What's the clear lesson or message you want them to take away? What value do you offer them? What questions might they have? What advice or help can you provide?

My friend Tim Washer of Cisco refers to this reframing as giving your audience a gift: How can you best serve them, with a mind-set of generosity and giving?

To get to the heart of this reframing, I ask "So what?" and then answer, "Because..."

Repeat that "so what/because" query and response string as many times as necessary—until you've exhausted any ability to come up with an answer.

Or until you're questioning things best left to the philosophers.

I want to drive interest and awareness in the launch of our new collaborative editing software.

Because our new text editor makes it stupid-easy in three specific ways for those of you without a geek gene to easily collaborate from remote locales, without overwriting each other's stuff or losing earlier versions.

Because all that's a pain to deal with, and it causes a lot of frustration and suffering for collaborative, virtual teams.

You get the idea.

Express your reframed idea as a clear message. In this case, something like this:

Our new text editor makes it stupid-easy in three specific ways for those of you without a geek gene to easily work together from remote locales, without overwriting each other's stuff or losing earlier versions, which makes for happier, less frustrated collaborators. You'll get your work done faster, with less wasted effort.

Then put that at the top of the page, like a bonfire on the beachhead, to remind you where you're headed with your writing.

Don't discount your own experience; at the same time, don't rely exclusively on it. Use yourself as one of your sources if you have relevant experience. That works, because "the more personal you are, the more universal you become," writes Chip Scanlan, Poynter.org's writing advice columnist.

"The writer who uses herself as a source and resource has the greatest chance of connecting with the largest audience," Chip points out. "[A]sk yourself: What do I think about this story? What do I know about it?"

You'll want to research your topic, of course. But "the smart writers I know start out by tapping into their own private stock first," Chip says.

In our example, ask: Is there research that quantifies the problem? Who else has dealt with catastrophes or successes? Could you talk to those people or organizations to get their firsthand horror stories and advice? Also, what's been your own experience?

4. Organize. What structure helps communicate your point? Some options are a list, a how-to guide, a client narrative, a Q&A, a contrarian view, a skeptical approach, how-to, case study… and so on.

Organize the outline or general architecture that suits that type of story best.

5. Write to one person. Imagine the one person you're helping with this piece of writing. And then write directly to that person (using you, as opposed to using people or they).

Connect your reader to the issue you're writing about (again, why does it matter to him or her?), perhaps by relaying a scenario or telling a story. Put your reader (or someone just like him or her) into your story right up front—because you want the reader to recognize and relate to an issue.

Don't worry about grammar, complete sentences, or readability. Don't fret about spelling or usage. You'll tackle all that later. For now, just get that TUFD down.

By the way, this show-up-and-throw-up phase is often where many bloggers end the process. But you won't do that—because you have respect both for your writing and for your reader.

7. Walk away. Walking away is self-explanatory. You don't need to actually go for a walk, of course. Just put some distance between your first draft and the second.

How much distance depends on you. I try to put a day between my own (usually spectacularly ugly!) TUFD and the next step, because that amount of time seems to let my thinking season and mature. I feel better prepared to slap those words around a little, willing them to take shape on the page.

I don't always have the luxury of that long a fermentation period—and if a piece is tied to a news story, you might not either. So work with what you've got. But at least try to get out of the building—maybe grab a coffee or a slice of pie or something.

8. Rewrite. Shape that mess into something that a reader wants to read. In your head, swap places with your reader as you do so.

Rewriting is the thing that separates us from the chimps. Or, at least, capable writers from less-capable ones.

9. Give it a great headline or title. Spend as much time on the headline as you do on the writing itself. Respect the headline.

The headline is not the metaphorical cherry on top, the dot over the i, the cross on the t, the icing on the cake, or the finishing flourish. Today, especially, it's a key element of your post, article, or other piece of content. It tells the audience what you are going to deliver, how you're going to deliver it, and why they should keep reading.

So spend time with it, think on it, and figure out how to best use that valuable bit of text.

10. Have someone edit. Ideally, the person who edits your piece will have a tight grip on grammar, usage, style, and punctuation. Like a bona fide editor.

11. One final look for readability. Does your piece look inviting, alluring, easy to scan? With short paragraphs and bold subheads? Are your lists numbered or bulleted?

For the most part, chunky chunks of text feel impenetrable and don't convey energy and movement. 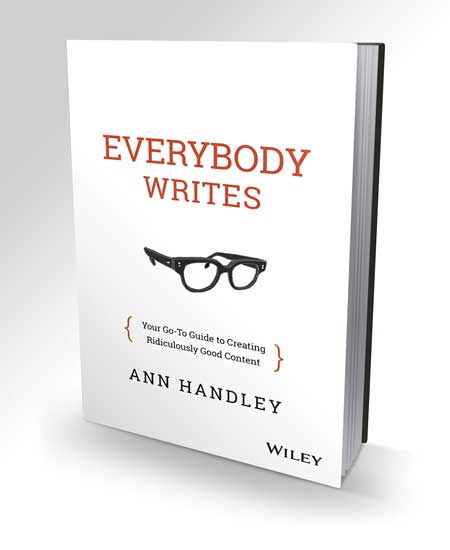 12. Publish, but not without answering one more reader question: "What now?" Don't leave your readers just standing awkwardly in the middle of the dance floor after the music stops. What do you want them to do next?

Check out other resources?
Sign up to hear more?
Register for an event or a free trial?
Buy something?

Consider the order of the steps in this outlined writing process merely a suggestion. You can toss them around and follow them in any order you wish—perhaps you like to barf up your first draft onto the page incoherently and then organize your writing into something more cogent.

That's fine; it's completely at your discretion. There is no one way to write, remember?

(The only order I wouldn't suggest is backwards. Because that's just a formula for ridiculously bad content.)

Ann Handley is a Wall Street Journal best-selling author who recently published Everybody Writes 2. She speaks worldwide about how businesses can escape marketing mediocrity to ignite tangible results. IBM named her one of the 7 people shaping modern marketing. Ann is the Chief Content Officer of MarketingProfs, a LinkedIn Influencer, a keynote speaker, mom, dog person, and writer.