Note: This article is based in part on the book Non-Obvious: How to Think Different, Curate Ideas and Predict the Future.*

Nearly three years ago, the world learned the story of a retired postal worker who had quietly amassed one of the greatest collections of modern art in the world.

Herbert Vogel and his wife, Dorothy, were already legends in the world of art when Herbert passed away in 2012 at the age of 89. News stories the day after his death told the story of five large moving vans showing up at the Vogel's rent-controlled, one-bedroom New York apartment to pick up more than 5,000 pieces of art. The Vogel Collection, built over decades, would have a permanent home as part of the archives and collection at the National Gallery of Art.

The Vogels had always said the only thing they did was to buy and collect art they loved.

That passion often led them to find new young artists to support before the rest of the world discovered them. The Vogels ultimately became more than collectors. They were tastemakers. And their "fabled collection," as one critic later described it, which included art from hundreds of artists, including pop artist Roy Lichtenstein and post-minimalist Richard Tuttle, was the envy of museums around the world.

The same qualities that drive art patrons like the Vogels to follow their instincts and collect beautiful things are the ones that make great curators.

Museum curators organize collections into themes that tell stories. Individual curators create stories by collecting ideas or items they have a passion for. Either way, the goal of curation is always taking individual items and examples and weaving them together into a narrative.

In other words, curation adds meaning to isolated beautiful things.

I am inspired by curators—and it is a relevant idea for marketing. The business world has been increasingly turning toward curation as a way to add meaning to marketing. I often describe it as the forgotten side of content marketing.

Amid all the discussion about creating great content, who will take on the valuable role of just helping us to find the great content that already exists on the Web or otherwise?

Curators can solve the problem, and they come from all types of backgrounds.

Some focus on art and design while others may look to history or anthropology. Some have professional training and degrees, and others are driven by passion (like Herbert and Dorothy Vogel).

No matter their background, every one of them exhibits the same types of habits that help them to become masters at adding meaning to noise.

Among the greatest skills any of us can have is the curating of ideas—and if we want to learn how to do it, we must practice five essential habits.

The Five Habits of Curators 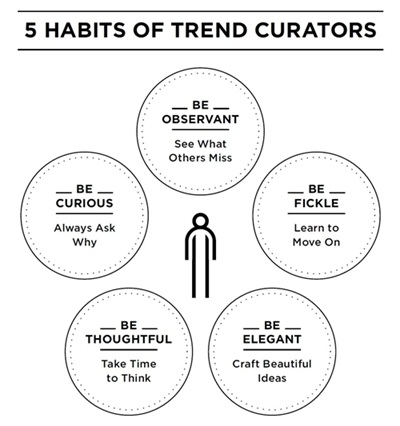 From NON-OBVIOUS: How to Think Different, Curate Ideas
and Predict the Future

We as people are naturally curious. The challenge is to find ways to allow yourself to continually explore your curiosity without allowing it to become an ongoing distraction. When noted chef and food pioneer Ferran Adrià was once asked what he likes to have for breakfast, his reply was simple: "I like to eat a different fruit every day of the month." Imagine if you were able to do that with ideas. Being more curious means asking questions about why things work the way they do and embracing unfamiliar situations or topics with a sense of wonder.

Joe Navarro, the famous former FBI agent who now teaches people how to properly read body language, once wrote, "The problem is that most people spend their lives looking but not truly seeing." Learning to be more observant isn't about seeing the big things. Instead, it is about training yourself to pay more attention to the little things. Being more observant means training yourself to see the details that most others often miss. When you learn to do it, what you observe can offer new insights about people, processes, and companies that you didn't know or see before.

Being fickle may seem like a bad thing, but that isn't always true. When we hear the word, we tend to think of all the negative situations where we act inconstantly or abandon people or ideas too quickly... but there is an upside to learning how to be purposefully fickle. Being fickle means capturing ideas without needing to fully understand or analyze them in that same moment. On the surface, this may seem counterintuitive. After all, when you find a great idea, why wouldn't you take the time to analyze it and develop a point of view? Yet, freeing yourself from doing so as a necessity can enable you to see and collect more ideas. A key part of becoming an idea curator is learning to save ideas for later digestion.

In 2014, after 10 years of writing my personal blog, I decided to stop allowing comments. The reason was simple. I had noticed a steady decline in the quality of comments; what was once a robust discussion with thoughtfully worded responses had devolved into thumbs-up style comments and spam. Unfortunately, comments had become thoughtless instead of thoughtful. Being thoughtful means taking the time to reflect on a point of view and to share it in a considered way. As a consequence of anonymous commenting and the ease of sharing knee-jerk responses, thoughtfulness matters more than ever.

We love to read or see elegant solutions and we delight in their ability to help us get the big picture with ease, but they may not be quite so simple to develop or write. If you have ever sat down with paper or a computer screen in front of you and tried to tell a simple story, you know that it can be harder than it seems. But we all have the power to simplify our ideas and share them in more elegant ways. Being elegant means developing your ability to describe a concept in a beautiful and simple way for easy understanding. 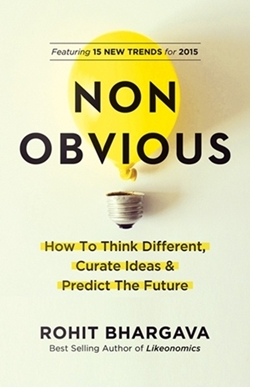 Looking back, selecting these five habits to help you learn the art of curating ideas may seem a bit random. What makes these five habits stand out? The fact is, the process of how I came to these five in particular was an interesting exercise of curation in itself.

For a year I read interviews with professional art curators and how they learned their craft. I bought more than a dozen books written by trend forecasters, futurists, and innovators. I carefully studied my own behavior and I tested the effectiveness of these habits by teaching them to my students in classes and business professionals in workshops.

Ultimately, I selected these five habits because they were the most helpful, descriptive, easy-to-learn, and effective once you learn to put them into action.

Becoming better at curation will not only help you to develop a stronger marketing strategy but also make you better at executing that strategy.

*The e-book version of Non-Obvious is available for just 99 cents on both Amazon and B&N if downloaded before Sunday, Feb 15. Thereafter, the price will be $9.99. Hardcover will become available in March.

Continue reading "These Five Essential Habits of Curators Will Make You a Smarter Marketer" ... Read the full article

Rohit Bhargava is the best-selling author of five marketing books, including Likeonomics and the newly released Non-Obvious: How to Think Different, Curate Ideas and Predict the Future. The founder of consultancy Influential Marketing Group, Rohit is also a popular "non-obvious" keynote speaker and an adjunct professor of marketing at Georgetown University.