Pew Report: Internet Use in the Recession

Nearly 7 in 10 Americans (69%), or 88% of US Internet users, have used the Internet to cope with the recession—to hunt for bargains, jobs, ways to upgrade their skills, better investment strategies, housing options, and government benefits—according to a new report from the Pew Internet & American Life Project.

Though the Internet ranks high among sources of information and advice that people are seeking, especially about personal finances and economic circumstances, broadcast media are used more as sources of news about national economics, finds the report titled "The Internet and the Recession." 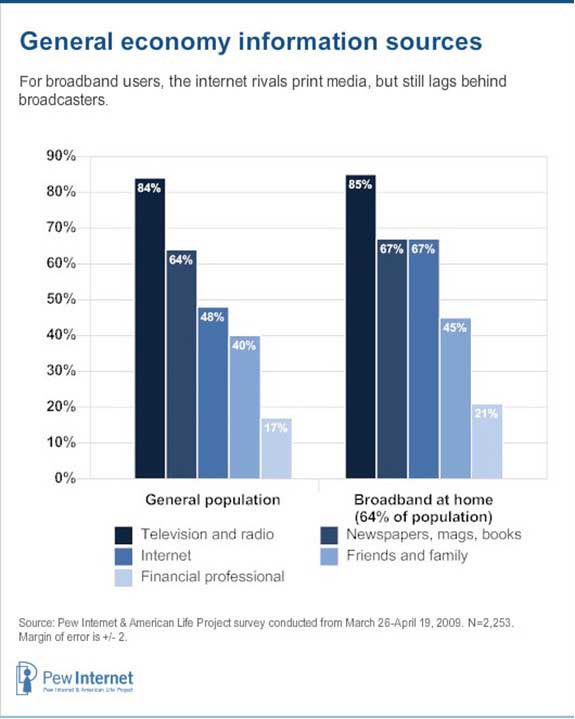 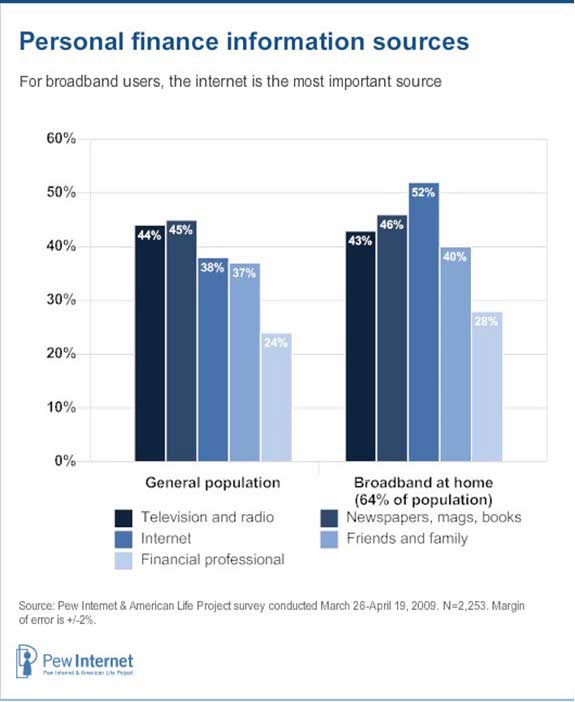 To meet the challenges of the current economy, most people consult multiple sources of information and support: They "network" with family, friends, experts, and information sources to make sense of the economy and proposed policy solutions.

The 52% of Americans who have been seriously affected by the recession—those whose investments and house values have plummeted, or those who have struggled in the job market—seek information in ways different from those who have not been hard-hit.

On average, Americans are using 2-3 sources of information to make sense of what is happening and plan personal coping strategies. They talk to people, seek updates from media sources like newspapers and broadcast media, and actively search for insights into the economy and how they might adjust.

However, the quest for information and advice online is not intense for most Americans:

The following are among the findings of the Pew Internet study:

Some 52% of Americans have been hard-hit by the recession, having been affected in at least one of the following ways:

The "online economic users," the 69% of Americans (and 88% of Internet users) who have used the Internet for recession-related purposes in the past year, have done so for the following purposes:

Though most online Americans say their Internet use has not changed much and the things they have done online have not had tremendous influence on their beliefs and actions, a sizeable portion of online economic users report changes in their views and actions:

About the study: Pew's "The Internet and the Recession" report is based on the findings of a daily tracking survey on Americans' use of the Internet. The results are based on data from telephone interviews conducted by Princeton Survey Research International between March 26 to April 19, 2009, among a sample of 2,253 adults, 18 and older. A combination of landline and cellular random digit dial (RDD) samples was used to represent all adults in the continental United States who have access to either a landline or cellular telephone.

Continue reading "Pew Report: Internet Use in the Recession" ... Read the full article