Though professional news organizations contributed more than one-half (51.2%) of the most popular news footage posted on YouTube during the 15 months ended March 2012, over one-third (39.2%) of such content was uploaded by private citizens, according to a report by Pew.

Some 4.6% of the most popular news footage on YouTube was generated by corporate and political groups, and the origin of another 5.0% was not clearly identified: 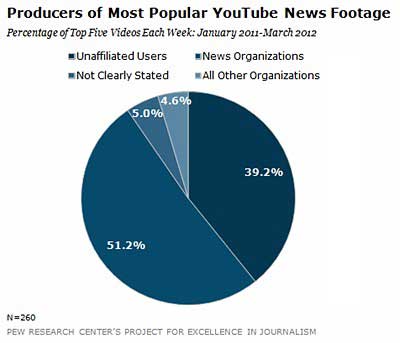 For the study, The PEJ tracked 15 months' worth of the most popular news videos on the site (Jan 2011 to March 2012)[1]. Some 260 different videos were examined, by identifying and tracking the five most-viewed videos each week located in the "news & politics" channel of YouTube, analyzing the nature of the video, the topics viewed most often, who produced them, and who posted them.[2]

Below, additional findings from the July 2012 report titled "YouTube & News: A New Kind of Visual News," issued by the Pew Research Center's Project for Excellence in Journalism (PEJ).

The rest of the most popular news videos during the 15-month period, 61%, were posted by the same news organizations that produced the reports.

Clearly, a symbiotic relationship has developed between citizens and news organizations on YouTube, a relationship that comes close to the continuous journalistic "dialogue" many observers predicted would characterize journalism online, Pew notes.

However, although YouTube offers guidelines on how to attribute content, clear ethical standards have not developed on how to attribute the video content moving through the synergistic sharing loop. For example, news organizations sometimes post content that was apparently captured by citizen eyewitnesses without any clear attribution as to the original producer. Citizens also post copyrighted material without permission. And finally, sometimes the creator of video content cannot be identified, Pew points out.

With a majority of YouTube traffic (70%) outside the US, the three most popular storylines worldwide over the 15-month period were non-US events. The Japanese earthquake and tsunami was No. 1 (and accounted for 5.4% of all the 260 videos), followed by elections in Russia (4.6%), and unrest in the Middle East (4.2%): 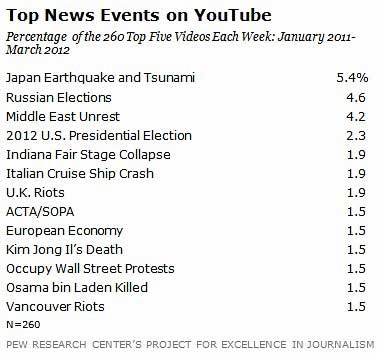 The most popular news videos were a mix of graphic and controversial news content and imagery: 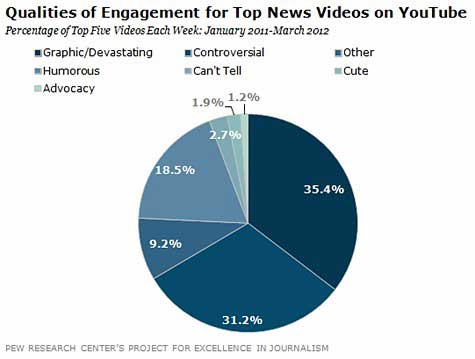 The most popular news videos are a mix of edited and raw footage.

Unlike traditional TV news, the lengths of the most popular news videos on YouTube vary greatly.

But the variation in the length of the YouTube videos stands out even more.

Although traditional news tends to follow strict formulas for length, the most popular news videos on YouTube were fairly evenly distributed—from under a minute (28.8%), one to two minutes (20.8%), two to five minutes (32.7%) and longer than five (17.7%):[3] 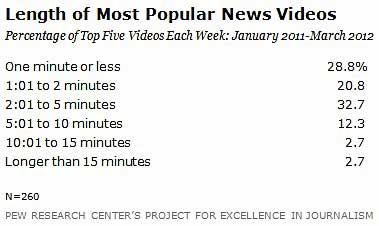 News viewership on YouTube is likely still outpaced by the audience for news on conventional television worldwide. For example, although the 20 tsunami videos were viewed 96 million times worldwide the week of the disaster, more people almost certainly watched on local and national television around the globe. Some 22 million people on average watch the evening news on the three broadcast channels each night in the US alone, and larger numbers watch local TV newscasts.

[1] PEJ tracked 295 news videos on YouTube during the 15-month period. However, 35 videos were removed from the site for a variety of reasons before the examination was completed, resulting in the overall sample of 260 videos.

[2] As with many settings on YouTube and other social networks, it is up to the person posting the video to choose the categorization or channel where each post will appear on the site. This study examines the most popular videos in the "news & politics" category of YouTube. What one person might categorize as "news and politics" another person might label as "science and entertainment" or "tech" YouTube does not do any reclassifying on its own.

[3] By contrast, most (76%) packages on national network news were between 2 and 5 minutes. Less than 1% were longer than 5 minutes and 5% were under a minute.

About the data: Findings are based on a study of 295 news videos on YouTube from Jan 2011 to March 2012. The PEJ report "YouTube & the News: A New Kind of Visual Journalism," was authored by Deputy Director Amy Mitchell and Senior Researcher Paul Hitlin, with research support from Sovini Tan. Tom Rosenstiel was the editor. The report was issued on July 16, 2012 and accessed on July 18, 2012.