Geography can play a big role in influencing e-commerce performance measurements such as conversion rate and average order value (AOV), according to a report by Monetate, which analyzed a random sample of more than 100 million online shopping experiences for the third quarter of 2012.

In the US, for example, none of the top five states that drive the most traffic to leading e-commerce websites (California, New York, Texas, Florida, and Pennsylvania) have the highest conversion rates. 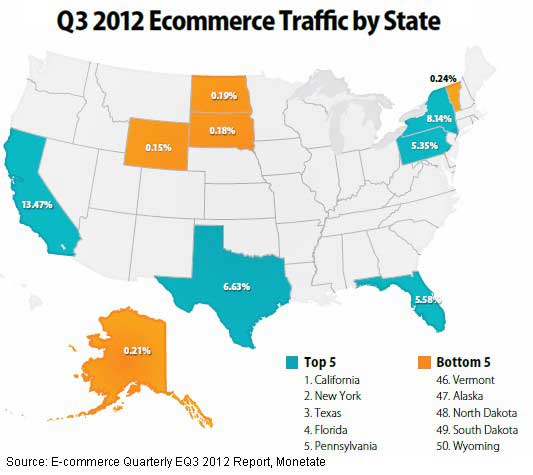 However, California, which drives the most amount of traffic, converts at only 2.89%. 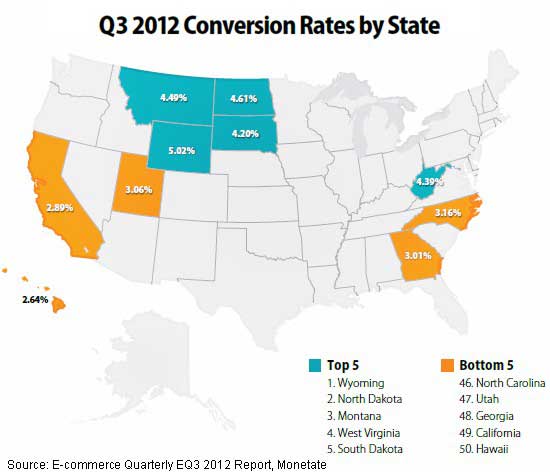 Growth in Shopping via Smartphone, Tablet

As of 3Q12, total shopping sessions via tablets increased 161% year over year, while traffic via smartphones increased at an equally impressive 119%.

Overall, nearly one in five consumers made online purchases via smartphone (10.03%) or tablet (8.37%) in the third quarter. By contrast, only 8% of traffic to leading e-commerce websites was generated via tablets and smartphones in the same period a year earlier. 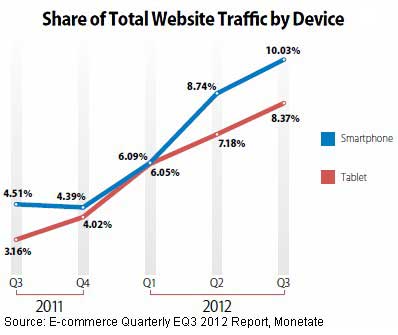 Surprisingly, there was no correlation between the states with the overall highest market share of e-commerce website traffic and the growing number of visitors using tablets and smartphones.

California, which drives the most e-commerce website traffic, ranks close to the bottom of tablet traffic market share, at 7.84%, and tablet users from Iowa generate the least amount of website traffic (7.18%).

The study also analyzed e-commerce traffic from countries outside the US.

Based on AOV, international customers spend 38.43% more than shoppers from the US ($125.33 vs. $90.54); however, international buyers tend to have higher abandonment rates and lower conversion rates: 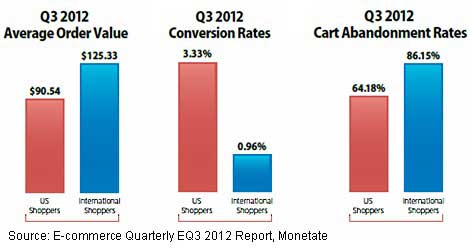 About the data: For the report, Monetate analyzed a random sample of over 100 million online shopping experiences using "same store" data across in the third quarter of 2012.