Most iPhone users (82%) are loyal to the iPhone brand—that is, they would definitely or probably buy another iPhone—the "Smartphone Usage and Brand Study" study found.

iPhone penetration is significantly higher among males than females, and those age 25-44 versus younger counterparts, according to Crowd Science: 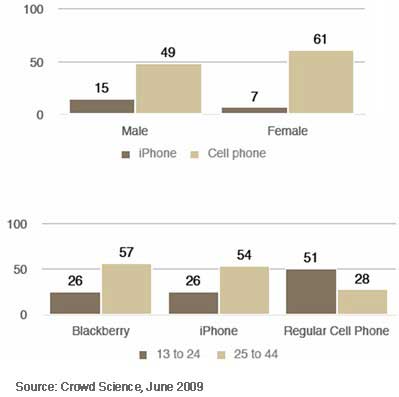 About the findings: The "Smartphone Usage and Brand Study" study (pdf)was conducted across the Crowd Science open research network, a group of websites from a wide range of topic areas serving over 20 million unique visitors profiled by Crowd Science's audience measurement technology. Through random probability sampling, respondents aged 14 years and older were invited to participate. Those accepting the invitation comprised the final sample of study participants. Data collection was conducted from May 19 to June 8, 2009.

Got an idea for a MarketingProfs Daily Chirp? Shout it out!