How to Reach 100% of Your Audience: CEO Amanda Holmes on Marketing Smarts [Podcast]

Amanda Holmes became CEO of Chet Holmes International at the age of 24. She stepped in after the death of her father, Chet Holmes, author of The Ultimate Sales Machine: Turbocharge Your Business With Relentless Focus on 12 Key Strategies. Since taking the helm, she's proven an effective leader and a savvy strategist, dispelling any doubts that someone so young could lead such a big company.

Bill Carmody extolled Amanda's work ethic and vision in Inc., saying, "I believe Amanda Holmes represents a mastery that is not typically associated with the Millennial generation."

I invited Amanda to Marketing Smarts to share the story of how she took over as CEO of her late father's multimillion-dollar company, even though she was the youngest employee by 20 years.

I also wanted to share some fundamental underpinnings of the Chet Holmes method—a precursor to modern content marketing—including the "Stadium Pitch" and the buyer's pyramid. Those approaches have helped hundreds of organizations to realize a massive upsurge in sales.

Here are some highlights from my conversation with Amanda:

Don't focus so intently on growing your business that you forget to take care of yourself (13:54): Chet Holmes "was known for pig-headed discipline and determination—PHD. That's what he taught as the single thing that you need to be successful. Just being able to have that discipline to keep working at it and being focused. I definitely learned that from him, and that's why I've been able to do as much as I have in 27 years, but the difference is that I purposely take the time to rejuvenate. I take the time to take care of myself and my body, and work on the inside of me so that everything else works.... A huge reason why I didn't want to take over [Chet Holmes International] originally is because I felt that...I would just be walking into my father's grave. At 55 years old, he passed away, and he really worked himself into that. They say 'don't work so hard, Honey,' but it's also just teaching 'here is how you rejuvenate.'"

Don't just create content: Create content that makes people want to work with you (16:10): "I've been saying it forever that my father came up with content marketing before there was content marketing. He's been doing content marketing for 40 years, and what's great about the methodology...really tying that content back to the logical conclusion that you need to work together.... Everyone says 'you need a blog, you need a blog, you need to do this, you need to do that,' but they've lost the why. They've lost the how. Some people do it, and some people do it great, because they understand the concept of providing value and making sure that it ties back to what they do."

If you're only talking about yourself, you're only reaching 3% of your potential audience (18:45): "There's this thing called The Buyers Pyramid. For any given time, let's say there's 100 people in a room, you have about the top 3% that are interested in buying now. And that's in general and it's been proven time and time again.... Then you have the top 7% that are open to buying. So maybe they're not buying right now, but in the future they're going to buy.... Then you have the next 30% that are not thinking about it. The following 30% that are definitely not interested, and then the last 30% that think they're not interested. If you look at that buyer's pyramid, only the top 10% are interested in your product right now. The rest of the 90% that are seeing your sales and marketing messages are not interested in what you have to say. So if you're going out saying 'I'm a great photographer, you should work with me' or "I sell vitamins' or whatever it may be, as long as you're talking about yourself, you're only reaching the top 3%. 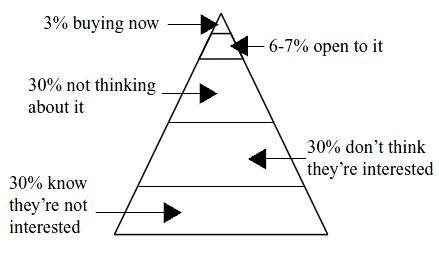 "So how do you build a 'Stadium Pitch' that gets the interest of the entire Buyer's Pyramid, so that you get nine times the results from your current marketing spend? There's a difference between somebody that may be interested now and maybe not, but might be in 5 years, and getting their email and you follow up with 'hey, this is what's going on in the world of home development,' 'oh, did you know these are the 5 things you need to know to make your home a feng shui happy environment,' and because you email them over the next couple of years, then when they're actually ready to buy, you can get them to purchase. It's not about the sale today, it's about the sale long term. It's a long-term game."

To learn more about Chet Holmes International, visit ChetHolmes.com, or follow the company on Twitter. You can follow Amanda on Twitter @AmandaHolmes. (She's also @AmandaHolmes on Periscope, where she sings marketing insights in the Sales Lounge!)

For video proof of Amanda's vocal talents, check out her cover of "Build Me Up Buttercup" below.

Amanda and I talked about much more, so be sure to listen to the entire show, which you can do above, or download the mp3 and listen at your convenience. Of course, you can also subscribe to the Marketing Smarts podcast in iTunes or via RSS and never miss an episode!

This episode brought to you by...

Special thanks to production company Candidio, an efficient, affordable video production platform allowing marketers and communicators to collaborate and curate video content, with help from a team of professional, on-demand video editors for the finishing touches. Check them out!