One of the fastest-growing large companies in the world is VMware, based in Palo Alto, CA. Its sales, for example, have tripled over the last four years, from $600 million in 2006 to $2 billion in 2009, and sales are expected to hit $3 billion in 2010.

That may be why VMware is a Wall Street darling—because compared with the competition the company is growing both profitably and predictably. Why is that? And what does this mean to B2B marketers?

While conducting research for my upcoming book, we analyzed B2B marketers' budgets and found that spending trends for most B2B companies show that marketing dollars are spent targeting the wrong level of audience.

Let's examine this imbalance. The great companies that have separated themselves from their benchmark competitors have a marketing budget spread that more closely resembles the following: 35% to the users/purchasing, 35% to the influencers, and 30% to the decision-makers.

Note the approximately three-fold shift (compared with underperforming competitors) in spending aimed at decision-makers. So, clearly, rebalancing the marketing spend to hit decision-makers is important for success.

B2B marketers who know and understand the breakdown of their spending can better allocate their budgets and make a huge difference in a short period of time. 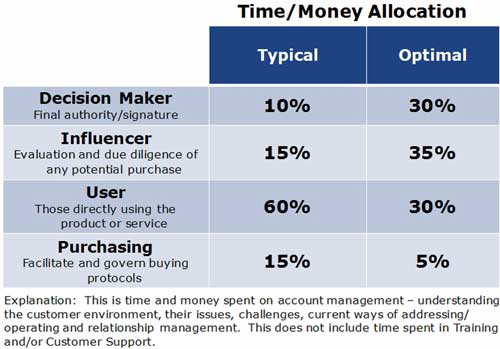 VMWare's VP of Global Strategic Partners, Scott Musson, says starting at the top has been critical to the company's success: "In our space, our competitors have been around for a long, long time (e.g., Microsoft). We don't have the luxury of branding ourselves to the entire planet. Nor do I believe it's even effective. We must maximize every marketing and sales dollar spent. And for VMware, as in other outperforming firms I've been a part of, the investment starts with the decision makers."

Another great example is a $1B company that allocates about 25% of its marketing budget to having a booth at over 100 tradeshows/conferences a year. The CEO recently asked for the ROI of those events. Not surprisingly, in 80 of them, not one deal could be tied back in some way to those conferences. They couldn't even name one deal that had resulted directly from the tradeshows where they exhibited, although the objective of participating in those events is to drive revenue and leads.

Naturally, the CEO asked why. The reality is that the attendees of tradeshows are predominantly end-users. Rarely are influencers or decision makers a part of those events. Moreover, most of the company's other programs were also targeted toward users and purchasing.

The result: Over the last three years, overall sales for the company declined about 15% a year. In short, the company has been confusing activity with results.

The objective is not to spend more; it's to rebalance—to shift the marketing budget to places where the company can have greater returns (i.e., qualified leads for the sales organization). That is why it is so important to analyze where your marketing budgets are going today: Where are the biggest returns on the marketing spend?

Marketers who can justify the ROI on every dollar spent are the ones who become true partners with Sales and catapult their credibility among the entire leadership team.

Bottom line: Rebalancing your marketing investments is the gateway to sustainable, predictable, profitable growth (and to being a Wall Street darling, of course).