In 2012, SiriusDecisions released a new version of its popular "demand waterfall" marketing effectiveness framework. Since 2002, many marketers have used the Sirius-defined processes, and the terminology "Marketing-qualified lead" (MQL) and "Sales-qualified lead" (SQL), to align sales and marketing activity and to track results.

By all accounts, the new demand waterfall graphic and report were very well received, particularly among those who have adopted Sirius's terminology.

So, what was once defined as a tidy "funnel" or a simple "waterfall" is no longer as relevant as it once was. Think, instead, a river fed by many brooks and streams that gracefully come together, only to rush over the edge of the waterfall into the (sometimes) beautiful and tranquil pond below at the last minute.

The following are the four changes that stood out for me: 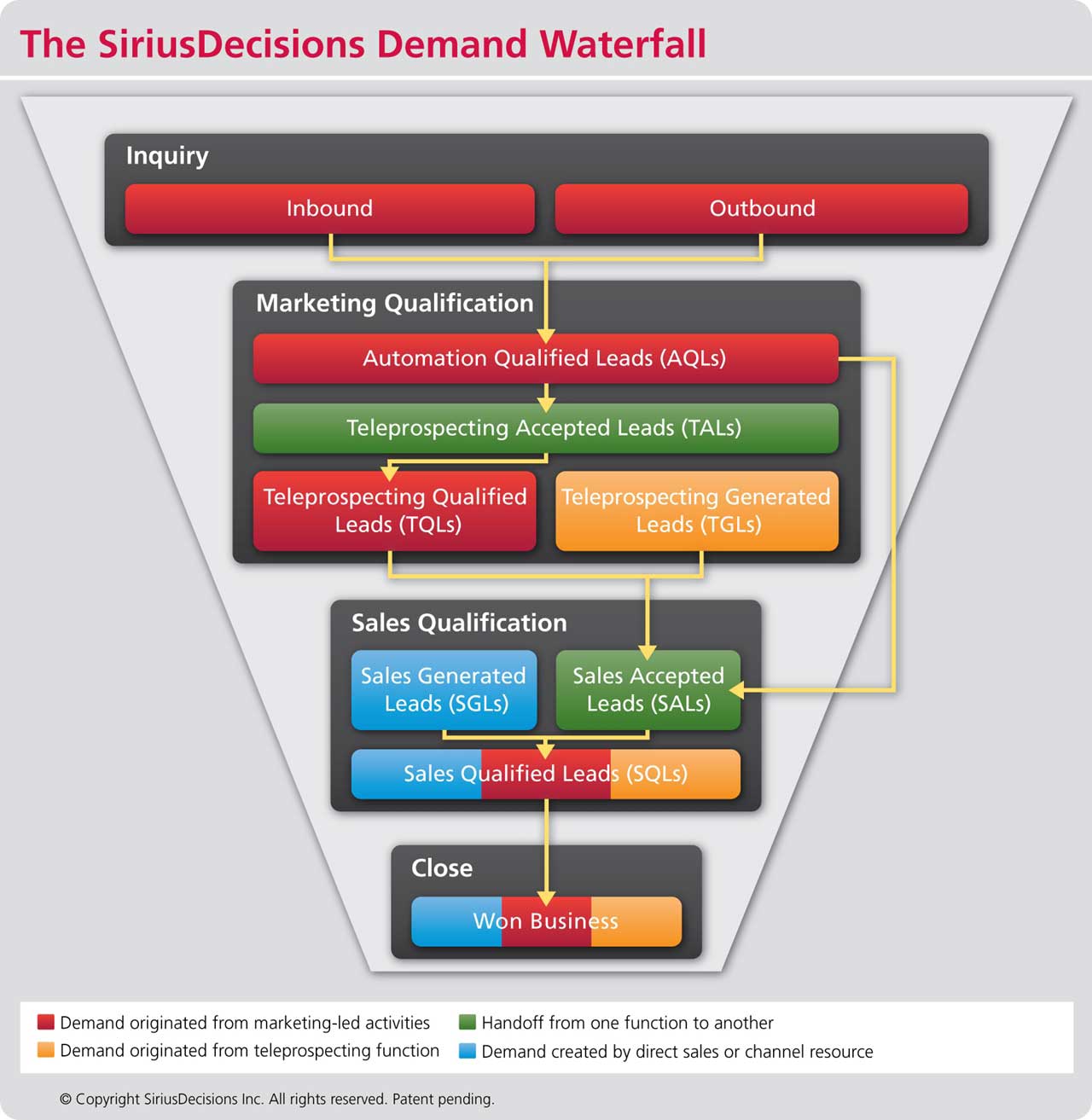 So, what do these changes mean to you? Use the following three key actions to put the changes into practice in your organization.

1. Take a holistic approach to your demand funnel management

Looking at your lead sources in silos is no longer good enough. You need to think about deals, cost of deals, and relative efficiencies. If you aren't working with a complete picture, you may make the wrong decisions.

For example, at one company I worked for, Marketing had contributed nearly 80% of the closable pipeline. Good, right? Hardly. Marketing opportunities were taking longer to close, they were smaller deals, and they were less qualified overall, so close rates were lower and distracting.

In a vacuum, you would see the 80% number and double down on marketing activity. Instead, when that activity is measured together with Sales goals and activity, you realize that you would need to restructure the program and reprioritize how Marketing was driving demand in partnership with Sales.

The Sirius framework sets up a process and a language that most everyone can agree on. But even in the gap from MQL to "Sales Accepted Lead" to SQL, we have a great deal of room for interpretation. In my experience, that gray area can be contentious. I recommend that Marketing adopt the language of Sales in those areas to ensure consistency.

Sales likely already has language in place around what counts as a qualified lead or opportunity. Simply adopt that definition and work backward, or negotiate a joint meaning.

If Marketing's definition of SQL (and therefore the mechanism for generating it) is different from that of Sales, you will be doomed. Everyone must be comfortable with the numbers and with what they report.

To know where to make adjustments, you must look for signals at every level of the Demand Waterfall funnel and you must have baseline and target goals for each area.

At the same time, you need to avoid analysis paralysis. Select two to three key metrics that matter most for your business and track the heck out of them, while using the rest of the metrics to inform plans and gauge internal effectiveness. Assess which metrics are key to your organization, publish both baseline and target goals, and then track them rigorously.

As with all frameworks, of course, the SiriusDecisions demand generation Waterfall framework is only as good as how you use it.

Aaron Dun is senior vice-president of marketing at CareAcademy, provider of caregiver training online for agencies.