Microsegment Your Way to Success in Social Media Marketing

Several aspects of social media marketing set it apart from consumer marketing of yore—the one-to-one conversations, the engagement with consumers in real time, and of course the contact with people who influence others.

To be effective in the many different types of social media marketing, some marketers have adopted microsegmentation as a strategy.

In traditional marketing segmentation, marketers are able to slice audiences according to demographics, geography, behavior, and psychology. In social media, we're able to get even more specific.

Imagine a company selling animal figurines. One way of thinking through microsegments would be to brainstorm the subgroups of people who collect animal figurines, such as those of farm animals, African wildlife, sea animals, domestic animals, and so on.

Within the group that buys figurines of domestic animals, for example, we can further break down the groupings according to specie and the relationship of those animals to people. The marketing team would continue to dream up possible subgroups, eventually getting down to very specific microsegments, such as the Labradoodle Lovers Club of Edison, NJ.

In my organization, we conduct whiteboard brainstorming sessions with several team members. After brainstorming, we transcribe our ideas into an indented list, resulting in a document that can be amended as new ideas occur. Using our example: 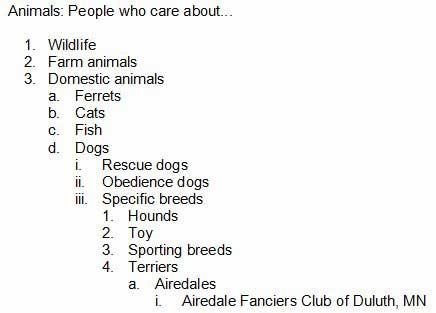 Of course, we would draw out every item to the same extent as or even further than the thread that led us to those Airedale fanciers in Duluth.

The resulting document also acts as the guide for discovering new online communities of people. We can then decide to participate in those communities or not, rapidly iterating through the microsegment document until we find the communities with which we're able to get some traction.

Sometimes, identifying the central theme of the microsegmentation brainstorming is a challenge, but doing so can be liberating.

For instance, in one campaign we launched for a nonprofit, we were stuck on the idea that just about everyone in the world cared about the central theme, which was music. After thinking through the issue more deeply, we realized that the organization stood for musicians in need—not just music—and thus we were able to brainstorm the possible groups that might care about musicians.

After we have created the microsegments document, we use keyword research and good old-fashioned search engine sleuthing to discover where the subgroups we uncovered aggregate on the Web. After figuring that out, we often discover even more microsegments.

In the example about the nonprofit for musicians, one branch of segments that we worked through was the world of music education—private music teachers, music education organizations, music schools, and so forth. After researching a particular college of music, we discovered that it had a world-music group, and, furthermore, that the group had a subgroup that did Zydeco dancing every Thursday evening.

Sometimes we are able to imagine lists that can be recombined to help us find yet even more microsegments. In the list below, we have people who are fond of particular species. If you cross that with the list below—based on relationship—you're able to expand the initial list exponentially.

As for all brainstorming, don't get caught up in exact rules. The important thing is to discover microsegments that you weren't thinking about. By doing so, you end up encountering very small groups of people you hadn't been aware of prior to the work.

Also, having a diversity of people—in terms of role in the organization as well as age, race/ethnicity, and gender—in the brainstorming workshop can bring a wider range of life experience into the thinking, enriching the outcome.

The microsegmentation work is only the beginning. Once you've discovered myriad specific communities, you can then spend time with those communities and get to know them. You'll be able to better understand how they interact with one another, helping you to engage them more effectively. Finally, you can uncover who is influential within those communities and develop relationships with those influencers, in turn extending your own brand's influence.

Ultimately, the microsegmentation exercise becomes the linchpin of your social media marketing strategy. The document you create is a living one that deserves to be revisited regularly.

For a brand, it might even be worthwhile to keep the whiteboard up in a prominent place, a daily reminder that marketing has changed forever and it's now about connecting with the smallest groups possible.

Ric Dragon is the author of Social Marketology: Improve Your Social Media Processes and Get Customers to Stay Forever, and the cofounder and CEO of DragonSearch, where he has led social media strategy for Steuben, the Grammy Foundation, Raritan, and other organizations. Reach him via Facebook and Twitter (@RicDragon).