Expand Your Market and Audience: Use the 'Idea Graph'

I've always been an entrepreneur. When I was 11, I started a lawn-mowing business. I pushed our trusty Craftsman mower from house to house in our sweltering New Jersey suburb and offered to do the job that everyone hates—for a fee, of course.

I picked up a few weekly paying customers, but I never got any more.

Turns out it was easy to sell to folks who...

I successfully sold to all of the people—all three of them—who fit those four criteria. After that, I had no other potential customers. (So much for buying that Schwinn Sting I'd been eyeing.)

That's a classic universe problem: You build a receptive, high-conversion audience, but then you can't increase its size.

Your universe contains everyone you can sell to; you must expand it, or your business will stagnate.

Let's consider this scenario: I decide that my company needs to branch out, and so I launch a zucchini farm. (Unlikely, because I hate the vegetable with a passion I normally reserve for hot weather and giant, boat-like cars. But play along.)

So, I grow a huge crop of zucchini and start a shipping operation, sending the gnarly cucumber-wannabes all over the United States. I advertise on Facebook by finding all those who have shown they're interested in zucchini. I advertise on Google AdWords by buying the keyword "zucchini" (not a great keyword buy, so don't imitate it, but the example works here).

Using the Facebook ad builder, I see that my Facebook universe is 169,420. And looking on AdWords, I see there are at least 49,500 searches per month by people who want to abuse their own taste buds. Business goes great, and I sell tens of thousands of zucchini. (It's all a bit horrifying, really.)

I have a universe problem (at least online).

Expand your universe with the Idea Graph

You can break out of your universe. A lucky PR break might get you in front of lots of new people; influential people might buy, and love, your product and tell their friends; or you might find another application for your product (zucchini-fiber clothing, anyone?).

Tools like Facebook's ad builder are also a great option to help you find a huge new audience among people who want your product but haven't told the world about it. In fact, social media provides one of the best opportunities to find that dormant audience by building an Idea Graph: It's like a social graph, except that instead of relationships it maps out all of the likes and wants of people who are connected only by the people who like or want them.

This isn't the same as related topics or semantic mapping. Those map similar ideas to each other, like this: 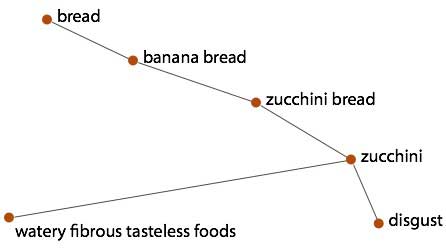 An Idea Graph, however, maps ideas based on audience affinity, like this: 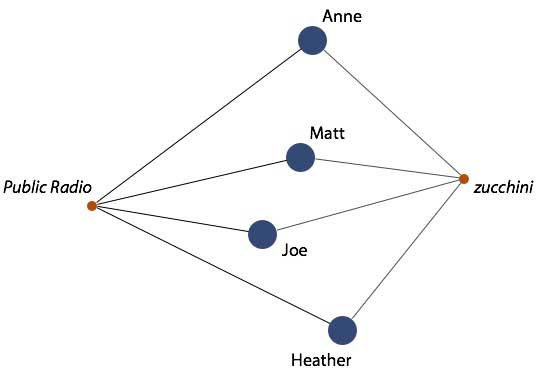 Public radio and zucchini aren't related. Until now, if I said "zucchini," I doubt "public radio" would've popped into your head. They're linked on the Idea Graph because a lot of people who like zucchini also happen to like public radio.

The relationships between two seemingly unrelated topics are called random affinities, which are what build the Idea Graph. In this case, because some people like both zucchini and public radio means that it's possible that other people have a similar shared interest but haven't said so yet or don't even know it themselves.

If I'm going to grow my zucchini business, I can try advertising to folks who like or search for public radio. If even a tiny percentage of those people buy, it's a great investment. Public radio listeners may offer a huge untapped audience for me to serve with delicious zucchini. 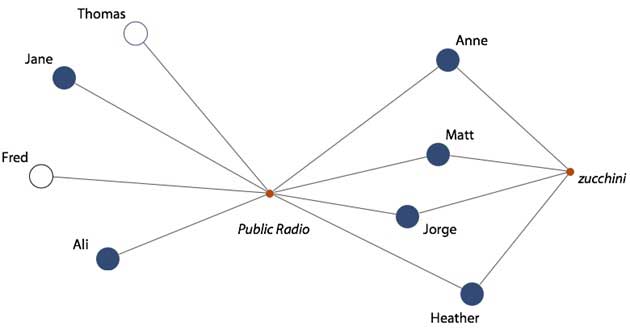 So, go look for random affinities! Facebook's ads tool is an easy place to start. When creating a new ad and choosing an audience, type an idea into "precise interests" and see what comes up in "suggested likes and interests." You might see, for example, that people who like chewing gum also like gummy bears.

At Portent Interactive, we're building an Idea Graph tool that will more formally make connections between these seemingly random interests. The result will be a list of ideas and the likelihood that someone who likes a particular topic will also like another topic. We're looking for 10,000 Facebook users to help us build the Idea Graph, which we will publicly release upon completion.

Is the Idea Graph a sure thing? No. Use it with care. But if you test it out, you'll find the random affinities that work well, and you'll never have a universe problem again.

Ian Lurie is the founder and CEO of Portent Inc., an Internet marketing agency founded in 1995 that provides digital marketing services, including search, social, and analytics. For the book Web Marketing All-In-One for Dummies (2nd ed.), he wrote sections on SEO, blogging, social media, and Web analytics.