The near-ubiquitous media presence of Will Ferrell's fictional character Ron Burgundy for Paramount's release of "Anchorman 2: The Legend Continues" has rightfully earned high praise for breaking new ground in marketing.

But that marketing campaign became an instant classic by virtue of more than just rich mahogany and real bits of panther; it owes much of its success to great content—and great content strategy.

Having crossed the $100 million box office sales threshold in the US, Mr. Burgundy's got many marketers wondering how they, too, can combine content marketing, advertising, and social media for great business results.

Here are five important content marketing lessons we can take away from Mr. Burgundy's latest endeavors.

Were the Dodge Durango spots really ads? Or were they a viral content platform for driving demand and excitement for Anchorman 2? Was Ron Burgundy's North Dakota newscast simply a special treat for news viewers, or was it a brilliant way to stoke a viral storm of interest around the film?

Burgundy seemed to be at his best when you weren't quite sure if it was an ad disguised as content or content in the form of an ad.

Think about ways that you can have parts of your advertising and content live "double lives," support one another, and integrate.

Example: Ron Burgundy as brand ambassador for a family SUV:

Disclosure: OneSpot is a marketing platform that converts content into standards-based advertising and programmatically places it across thousands of sites and networks.

2. Empower co-creation with experts and brands

Co-creators Will Ferrell and Adam McKay were at the heart of the campaign. Their talent in comedy built a foundation that every other participator could riff on.

Other co-creators were welcomed to the party, too. Jockey created underwear as seen in Anchorman 2. Ben & Jerry's created the limited-batch Scotchy Scotch Scotch ice cream flavor. Fans made their own videos to audition for the Anchorman team, and Anchorman memes were modified and shared by the thousands.

The most unexpected co-creator was the sports announcer Paul Gerke, who impersonated Ron Burgundy in a live broadcast. That video has earned over 3 million views on YouTube:

Who in your own or your brand's network can play a role or help to co-create your content?

Ron Burgundy made us laugh using all kinds of video, TV spots, soundtrack audio, a long-form book, animated GIFs, a digital game, real-world speaking roles, and even a museum exhibit. Much of the content answered the question: "What would Ron Burgundy do if he were real?"

By creating content in many formats, the Anchorman 2 push took on a sense of ubiquity rarely seen in typical marketing efforts, keeping the movie brand top-of-mind as potential patrons went about their holiday merrymaking and movie-outing planning.

Consider all the format's you're currently using for content marketing, and think about how you can experiment with or change up that mix in 2014.

Even as a fictional character, Ron Burgundy ran the real-world speaking circuit better than most. He announced Anchorman 2 on Conan O'Brien, co-anchored an actual newscast for KXMB in Bismarck, North Dakota, presented Eminem with the Global Icon Award at the 2013 MTV European Music Awards, and so much more. 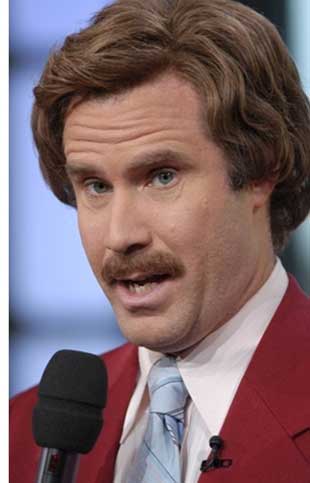 But fans didn't have to see all those things live to experience them, because most was documented and shared via social channels.

In social media, the campaign used Twitter, Tumblr, Facebook, and Google+ in ways that suited each community. Those sites linked heavily to videos on YouTube channels for Anchorman and for Dodge.

What are all the possible channels where your brand's content can travel and thrive? Be sure to consider the different earned and paid paths that might need to be taken to get there.

At the box office, the buzz about Burgundy is paying off. According to Entertainment Weekly, Adam McKay estimates that "Ferrell's Burgundy antics are worth at least $20 million in free publicity."

The movie is taking in big profits. According to Box Office Mojo, in 2013 Anchorman 2 grossed $95.5 million domestically and $25.5 million abroad for a worldwide take of $120 million. Those figures are well above the $50 million production budget. Plus, more revenue will be added in 2014 since the movie is still in theaters.

What's more, the orchestrated marketing and content fanfare around the movies release has added incalculable value to the overall Anchorman franchise for years to come.

How is your content playing a role in driving value for your business? How do you measure that result and that value?

Are you ready to one-up Ron Burgundy?

In 2014, someone is sure to one-up the '70s-era anchorman and break new ground in content marketing and advertising. It'll take a combination of the principles above plus a helping heaping of innovation and creativity to do so. Are you ready to take on that challenge?

However you decide to tackle content marketing in 2014, be sure to do one thing that Ron Burgundy tells us in every broadcast: Stay Classy.

Convert Prospects With the Power of Case Studies

A case study can be an effective storytelling tool to use in B2B content marketing. Learn why, as well as how to craft one, in this article.

How to Add Audio Content to Your Marketing Strategy

Audio of all types, from podcasts to voice search, is a powerful form of content marketing. If you're not doing it yet, here's how to get started.

Quality is a nebulous concept that can be difficult to define. Not for Google: high-quality content for better search rank depends on specific factors that can be optimized. Here's how to do so for five of them.

Webinars are more prevalent than ever, and that won't change any time soon. To reduce hiccups and improve the experience for attendees, follow these eight tips.

The World Is Looking for Thought Leaders. Could You Be One of Them?

Standing for something is good for business these days. But how do you go beyond merely sharing company values to crafting real thought leadership? Start with a POV blog post.

We've all heard that prospects consume at least 13 pieces of content before making a decision. But does that have to be true anymore? This article discusses why that should change.