Conventional wisdom has it that B2B content is workman-like: stolid, dependable, and certainly not as sexy as its B2C counterpart.

Looking at some of the most viral content from the past year, it's decidedly consumer-facing: Grumpy Cat. Miley Cyrus "twerking" at the MTV Video Awards. Ylvis' "What Does the Fox Say" video.

So is it possible to make our B2B content twerk, not just work?

Some B2B companies have managed to adapt viral memes in their marketing campaigns, but it can be difficult to understand exactly what "viral" means in B2B marketing. Furthermore, it's tempting to associate virality with frivolity.

Look a bit deeper and it's clear that viral content can translate into low-cost leads. Every person who reads, watches, or downloads your content may be a qualified lead at some point.

Viral content also allows us to influence others with tremendous effectiveness thanks to the inherent social proof embedded in sharing behavior.

Despite conventional wisdom, orchestrating virality is possible, to an extent. B2B marketers must first understand the answers to three very important questions:

The STEPPS framework created by Wharton school professor Jonah Berger, author of the best-selling book Contagious, outlines the six key elements that drive people to share. They include social currency, emotion, being "public," and providing others with information they can use.

Each of those is vital for B2B marketers operating in a world where their buyers are bombarded by thousands of online messages, status updates, tweets, images, emails, and more every day, both as consumers and as professionals.

Is it enough to overwhelm the market with an enormous tidal wave of sharing? If 10 million people shared your content, it would be exhilarating, exciting, and great for your ego... sure. But would it generate more high-quality leads and, ultimately, revenue for your company? That depends.

We at Influitive have been experimenting with a similar viral strategy. Our goal was to expand the reach of "How to Build a Billion $ Category," my Dreamforce 2013 Founders Forum presentation slides, which we both updated with new content that wasn't in the original presentation and optimized for SlideShare.

Since first released in early December, it has been featured on the SlideShare homepage and in the "Hot On Twitter" section, tweeted by @SlideShare and hundreds of others, downloaded more than 130 times, and embedded in a news article. As of the writing of this post, it has been viewed well over 12,000 times, and liked over 150 times on SlideShare and LinkedIn.

It has taken off.

That's why I wanted to share some of the insight we've gathered over the past weeks in the hopes of helping you empower your own advocates and influencers to make content go viral.

People aren't going to share something they don't absolutely love, or find useful for either themselves or their networks. They want to prove that they're in the know; your content should help them do that.

My presentation was designed to appeal to a wide range of people, from other entrepreneurs to VCs to marketers (including Influitive's customers) and more. It contained information and insight most of them probably had not seen before. As an augmentation of an actual Dreamforce presentation, it was also authentic in ways that the commonplace "top X ways to do Y" SlideShare formats seem ersatz.

Like a Bollywood movie format, which has a "masala"' of singing, dancing, romantic plot with action, the presentation has a personal story, a framework for how to think about categories, some compelling data on the value of category creation, and some practical steps driven from my personal experience.

I made a conscious effort to incorporate several of Berger's STEPPS to create buzz:

Whether readers learned something new or they were just on the lookout for the next big thing, what we heard was that they felt compelled to click through and then share.

2. Twerk it: Mobilize your advocates

Often, the hardest part of getting a piece of content to really take off is that you can't even get it an inch off the ground, let alone all the way into outer space. Asking your advocates to share it first primes the pump. Soon you have enough momentum so that others start to become interested and involved too.

We started with employees, announcing the launch in our daily all-hands meeting and then sending a companywide email with step-by-step instructions.

From there, we published a challenge in our own advocate marketing program. We asked our customers, partners, and fans to share the link, download the presentation, and "like" it in public—we had dozens of shares through that channel. 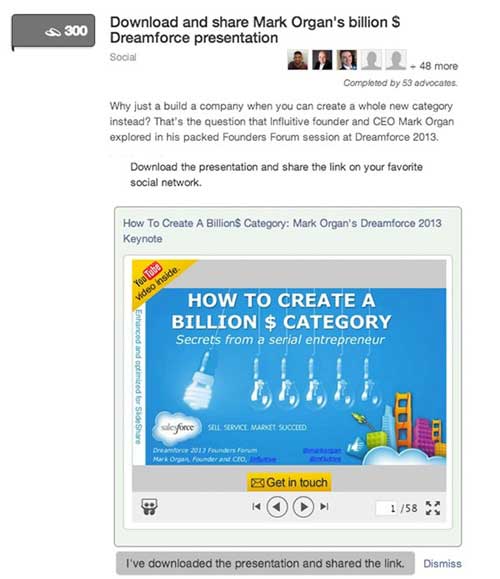 Advocates who completed the challenge received 300 points in our advocate marketing program, propelling them that much closer to the top of the leaderboard.

We were confident that this content would be relevant to our advocates; whether they're a customer, partner or investor, each of them has a vested interest in seeing this category grow from a great idea to a billion-dollar category.

Since it's my presentation, I also reached out to some of my own personal advocates through LinkedIn, in a personalized, one-to-one way. 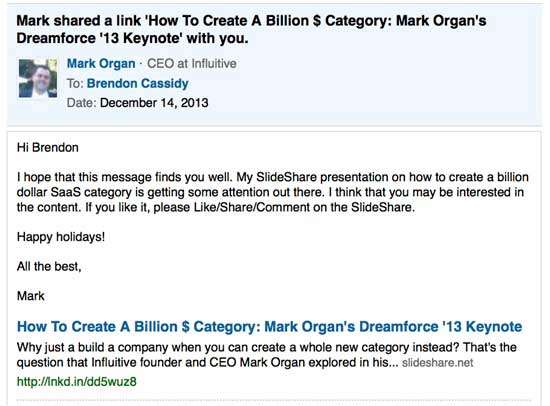 Within just a few hours, we had over 250 primary shares from advocates, which contributed to the 12,000+ views for the presentation.

Your advocates will endorse your content because they care about you and want to help you succeed. While they're not completely selfless, they typically don't care about social capital as much as influencers do.

Advocates and influencers may overlap, but it's unlikely that there's a large, engaged influencer cohort in your advocate pool. Influencers are always looking for ways to increase their social capital; one way to do that is to comment on or share content that's already started to go viral.

When reaching out to influencers, it's important to consider what kind of content, subject matter, and level of virality is important to them. Share something with an influencer only if you genuinely think it's relevant to him and his goals. If you don't already know him personally, it's worth taking the time to do your research on his areas of interest and what he tends to share with his networks.

After you've matched appropriate content to an influencer, make the appeal personally to endorse your content. Endorsement is a big deal for influencers, who value their reputation more than anything.

When you reach out to them, emphasize that your content has already gained traction and make it clear why they—and their followers—may be interested in it. If you're really organized, you may want to maintain a spreadsheet with all the information you collect about the influencers in your space.

I specifically targeted other influential founders and CEOs, venture capitalists, and industry analysts. Among the influencers who implicitly or explicitly endorsed my presentation via shares and comments were...

Have you twerked it?

You'll know when you have. Viral B2B content is virile content: it's energetic, it doesn't require your marketing team to hold its hand, and it generates views that can quickly snowball into leads.

As a strategy, virality is all about serendipitous conversation and promotion. It's a lead-generation method that you'll start yourself, but if it goes right... you'll be unable to control it.

Design content that's begging to be talked about, let advocates and influencers get the ball rolling, and keep twerking it.

Mark Organ is the founder and CEO of Influitive, helping companies mobilize their advocates to produce increases in referral leads, references, and social media participation. He also co-founded Eloqua Corporation in 1999.