10 Marketing Lessons From the World Cup

More than 2 Billion World Cup-related searches have been made since the event started on June 12. The opening game scored record ratings for ESPN, outpacing every other Cup dating back to 1930. Here are 10 marketing plays that helped the 2014 World Cup become the most watched in history.

1. Use controversy to your advantage

In a country where it can be unsafe to take a taxi and ATMs are too often tools for hackers to rob unwitting tourists, one stadium received $900 million in government funds to be built for the World Cup—and 13 other stadiums were also funded by the state.

Riots and protestors occupied building areas until they were forced out by police. Around the world, news of violence surrounding the Cup spread like juicy gossip. The World Cup took the negativity in stride and used it to boost viewership; as the games progressed, the bad press subsided, replaced by vast audiences.

The lesson: controversy, handled well, can be parlayed into increased audiences.

(For example, when the lyrics site Rap Genius was penalized by Google for spammy SEO practices back in December 2013, it was a PR nightmare. However, the site took the negative news in stride, using all the press about the incident to build up positive SEO—gaining links from The New York Times, Time Magazine, and hundreds of other top news sites. Today, the site is ranking higher than ever, and it recently closed a $40 million round of funding.)

James Rodriguez is the kid from Colombia who burst onto the scene in this World Cup; Neymar went down with a vertebra injury, effectively crippling his team; Lionel Messi couldn't quite do it all and fell short of glory. Each of these stories is its own mini-event inside the World Cup, providing news on a continuous basis.

Personal stories can take a huge event like the World Cup and bring it down to the level of the individual viewer. Though each game is watched by millions, these stories help make the event feel personal. They provide opportunities for people to become sympathetic toward the event and establish a connection that draws them back to watch again and again.

Personal stories humanize your brand and help customers self-identify with your company. By highlighting individual customer stories, you can help create strong bonds with customers and prospects.

The England-Italy rivalry, the Netherlands-Spain finals rematch, the USA-Ghana comeback match... these are the stories that headline the World Cup. For the countries involved, they help reaffirm patriotism while creating an added element of engagement and flare.

The World Cup inherently benefits from the fact that countries are playing each other, but the principle of categorization or segmentation is nothing new. Being banded together with those who are like us creates a feeling of camaraderie with others in our category, boosting morale and creating a sense of belonging.

In short, it helps define and create an audience.

4. Have a clear goal

All World Cup marketing starts and ends with the games. They have one goal, to get more people watching. Every single piece of marketing that gets created for the World Cup aims to drive more viewership.

Likewise, in your marketing, it's extremely useful to know what the overarching goal of your efforts is so you can create every marketing item with that goal in mind.

Knowing what your main goal is and sticking to it really helps narrow your focus, and avoid scope-creep (what happens when your marketing is all over the place).

5. Understand the public perception of your product

The opening act at the World Cup opening ceremony in Brazil was performed by Pitbull and Jennifer Lopez—Cuban-American and Puerto Rican-American, respectively. The closing act was Shakira, who is from Colombia.

The public may not necessarily know the differences among those countries, and since Pitbull, Jennifer Lopez, and Shakira have international recognition, it made sense for them to perform.

The lesson here is that your audience doesn't need every single detail to be perfect; referencing things in a way that coincides with your customers' perceptions is more important than being 100% accurate.

Head to FIFA.com and you'll find stats on every match, player, and country involved in the Cup. Hundreds of pages of information are available to be referenced in news and review articles around the world.

FIFA makes it easy for writers to create content about the World Cup, also requiring attribution for the source of the information, which further cements the FIFA and World Cup brands.

Be prepared for your brand to get shared, and help your fans to do so. Product reviews and articles drive the best traffic, and having the right assets available will have your brand ready for when those user-generated content is created.

Chants, songs, memes, images—all parts of the World Cup that stick with us. From the official World Cup song to the thousands of memes made for Tim Howard after his masterful performance against Portugal, the World Cup was ubiquitous. 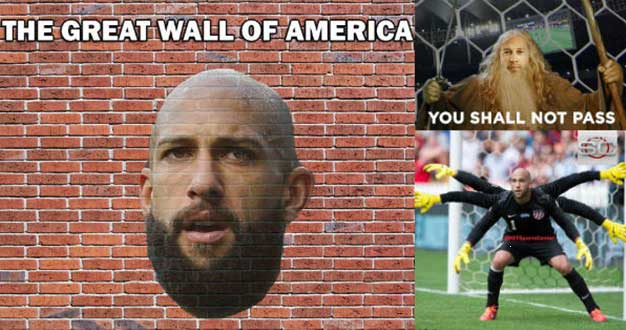 You too can build memorable snippets that represent your brand well, and use them as a way to remain top-of-mind among your audiences. Snippets can be songs, jingles, quizzes, videos... anything that is fun and short.

The marketers responsible for these videos understand their audiences.

In the US, soccer is just beginning to catch on as a popular sport, and very few people know who is on the national team. That's why they use recognizable public figures to build interest in the sport.

In Germany, football is a way of life, kids train to play the sport from the age of six, and the team members are considered national heroes. Their video focuses on the pure sport and doesn't need celebrities.

9. Use what you have in various ways

Highlights, team profiles, slide shows, and reviews—all ways that the World Cup has effectively re-used its most valuable asset—the games themselves. Each game is sliced and diced and redistributed in various ways to maximize the impact.

Similarly, your best marketing pieces can be cut up, rebuilt, and republished on different platforms to maximize reach. For example, a great article and be turned into a SlideShare, recorded as a video, and turned into an infographic. Each piece will reach a different segment of the audience. Once you know you've got a winner, milk it for all its worth.

10. Partner up with complementary people

A list of drinks from each country, comedians mocking the art of flopping, World Cup-inspired Adidas websites—those are just a few of the ways the World Cup has expanded its reach by forging partnerships with different industries.

Every business has complimentary companies (other businesses that reach a similar customer group, but with a different product). Forging partnerships with complementary businesses is great for both parties, because you can share audiences and content.

(For example, Interact provides a quiz plugin for email marketing software providers. These companies are not interested in getting into the quiz business, but they are more than happy to share their audience with a company that is. To this day, partnerships remain one of the top methods for generating new customers for us.)

The 2014 World Cup smashed all kinds of records, and there is a method behind it all. The same or similar tactics can be used in most every marketer's plan—to make us champions in our own right.