Google Just Got Rid of AdWords Converted Clicks. Now What?

Today, Google ends support for Converted Clicks in Google AdWords. Advertisers still using this metric in reports or for Target CPA bidding need to take a few steps to successfully migrate to the Conversions metrics instead.

This article outlines how this change may affect you and what you need to do.

What This Change Means

Now, AdWords has decided to retire the old metric to simplify reporting and conversion tracking, which pre-September 21 offered advertisers the choice between aligning bid strategy with Conversions or Converted Clicks.

Whom This Change Affects

To figure out whether you need to take action, ask yourself: Are you using automated bidding, namely Target CPA bidding, for your PPC campaigns?

If you are not, then you're in the clear and no changes are required of you. The only changes you will notice in AdWords come September 21 will be in reports, where the Converted Clicks column will be retired.

If you do have automated bidding set up, ask yourself the next question: Have you aligned your Target CPA bid strategy with Converted Clicks or Conversions?

If you're aligned with Conversions already, there are no actions that you need to make. The only change will be in reports.

So, if you've aligned your automated bidding to Converted Clicks, and you see a "Converted Clicks is going away" alert message in the Tools tab under Conversions, you will need to complete several steps to migrate to Conversions to avoid causing any disruptions to your campaigns.

Why People Aligned Bids to Converted Clicks and Not Conversions

You may be wondering why anyone would still be using Converted Clicks for bidding and reporting. Likely, it came down to the inconvenience of the switch.

First it's important to understand why a bidding strategy focused on only key conversions is more effective than bidding for all conversions. Consider the following example:

Imagine that an agency uses an automated bidding strategy aligned with Conversions, without filtering certain conversion types. That agency reports an average cost per conversion of $20, which averages the cost for newsletter subscriptions, resource downloads, actual sales, and more, combined. Had the agency isolated only actual sales within the Conversions column, it would have seen that it costs closer to $50 for a sale. But by structuring bids around the $20 average cost, bids are too low to convert actual sales, and the retailer loses business.

By counting the click that lead to a conversion, you are essentially able to develop a bidding strategy that focuses on only key conversions (given you configured the conversion action effectively). Using the filtering options for Conversions offers similar results.

Those who thought Converted Clicks worked well enough for their campaigns may have been reluctant to make the switch simply because it involved a bit of work for similar results.

With all that in mind, if you still use Converted Clicks, here are the steps for ensuring your campaign performance is not affected.

1. Change the conversion bid metric from Converted Clicks to Conversions 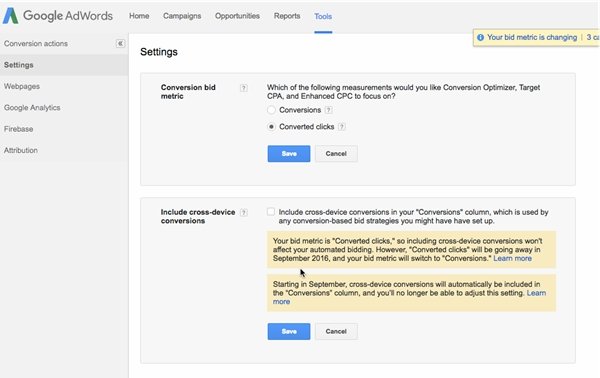 From the Tools menu at the top, select Conversions.

Then select Settings on the right, and switch the Conversion bid metric from Converted Clicks to Conversions.

You can also click to include cross-device conversions, or wait until AdWords applies this automatically this month.

If you don't align your bids with Conversions on your own, AdWords will do it for you.

If you find, once you make this adjustment, that there is a great difference between the number of Conversions and the number of Converted Clicks in your account, you will likely see a change in performance or bids, or both. Continue to the next few steps to avoid those issues.

2. Set your Conversion action count to one, so bid strategy isn't affected

Change the conversion count from Every to One under Conversion actions, in the Tools tab, to avoid counting every conversion you have.

If you don't change the count setting to One, the change from Converted Clicks to Conversions might destabilize the behavior of AdWords bidding strategies.

If you don't want to make this change manually, Google offers a migration tool to automate this change where applicable.

Setting the conversion count from Every to One is only the first step to better align Conversions with the Converted Clicks metric that's going away. 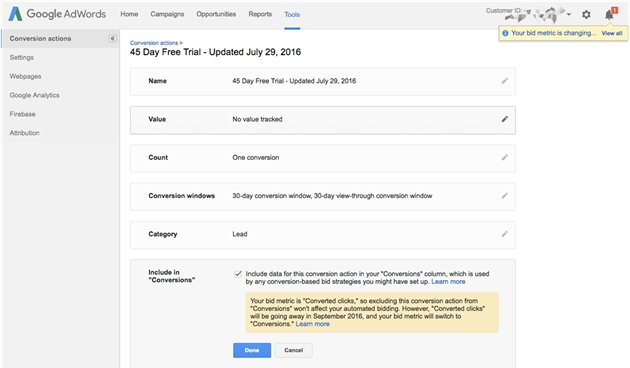 So as long as you made the changes in steps one and two, when you run Target CPA Bidding for Conversions there shouldn't be a significant change in the results or spend.

4. No changes to bid strategy necessary, but AdWords may change your CPA Targets automatically

AdWords has stated that it "may also adjust your CPA targets to avoid significant fluctuations in your campaign spending"; it's important, therefore, to make sure the above steps have been configured correctly so there is as little fluctuation in CPA targets as possible.

While you make these changes, take advantage of the time you spend in AdWords to do a little housekeeping to improve accounts performance, and you shouldn't have to worry about bid changes or any negative repercussions from this update.