By now, we've all seen the shocking viral videos. The rage-inducing photos. The fire-and-brimstone calls for a boycott, firings, and someone's head on a platter—preferably Oscar Munoz's, if George R.R. Martin has his way (you know it's bad when the guy that dreamed up the world's most twisted wedding is outraged by your behavior).

First, there was Leggingsgate. Then came the now-infamous denied-boarding fiasco. That was followed by scorpions on a plane, Grandmagate, and an Animal Farm-style story of a passenger downgrade, proving that, truly, "All animals are equal, but some animals are more equal than others." And speaking of animals, let's not forget the bizarre death—and subsequent unsanctioned cremation—of the giant rabbit Simon. Oh, and if that weren't enough, it appears United has something against weddings and honeymoons, too.

United, it seems, can't stop from shooting itself in its proverbial foot. 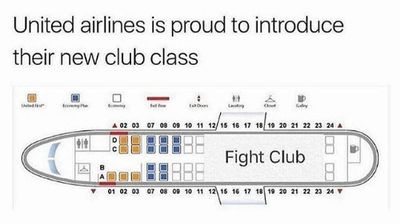 I'm guessing that shortly after those horrific videos, stories, and memes hit the Web and the crises started to mushroom out of control, Pepsi and Sean Spicer heaved a huge sigh of relief, and United's PR and social media teams made a run for the nearest bar. And, really, who could blame them? The company's handling of its tsunami of bad PR has been jaw-droppingly, astoundingly awful.

Take United's very first (but now deleted) response to Leggingsgate: "UA shall have the right to refuse passengers if they are not properly clothed via our Contract of Carriage." Say what?

And how about this initial response about having a passenger dragged bodily from the plane? 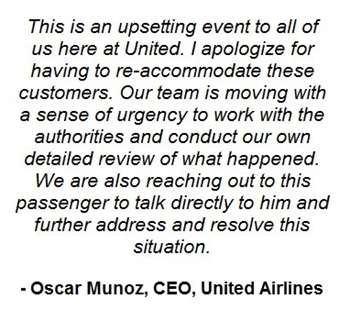 These rushed, ill-conceived responses left those of us toiling deep in the trenches of PR and social media, and the general public alike, scratching our collective heads and wondering: "What were you thinking?!"

I'm not one to kick anyone when they're down, but when bad news travels at bullet-train speed and everyone is armed with a camera capable of capturing provocative images and video, United should've known better. This no blushing neophyte in the rough-and-tumble world of modern day crisis communications; rather, this is a veteran brand that has endured a turbulent merger and withstood passenger anger over shrinking seat sizes, vanishing amenities, and the introduction of an avalanche of new fees. Heck, CEO Munoz was even recognized as Communicator of the Year by venerable trade pub PRWeek, an honor it's now rethinking.

How did it all go so wrong?

It looks as if United has forgotten the PR 101 foundations of managing crisis communications—transparency, responsibility, and the art of the apology. How differently would the dragging incident have unfolded if the airline had simply stepped up and said, "I'm sorry"? It could have prevented the situation from turning as dumpster fire ugly as it did.

I can hear the squawking coming from Legal already. An apology is an admission of guilt! Liability! We must minimize our exposure! Protect the company at all costs!

Don't get me wrong, Legal absolutely needs a seat at the crisis-comms table. Its counsel is required so that Marketing, PR, and Social Media can do their jobs effectively, without landing the organization deeper into hot water. On the flip side, though, Legal must give communications teams room to maneuver. Marketing, PR, and Social Media cannot respond adequately if shackled by mealy-mouthed legalese meant to deflect blame. To truly succeed, a crisis response has to be a joint effort between communications and Legal. Together, both sides of the table can come up with a strong strategy that addresses the situation while protecting brand integrity and value.

So, what lessons can we learn from United's ongoing struggle?

I recognize that most companies should—but often don't—have an emergency communications management strategy or guidelines in place (and properly communicated throughout the organization), so here's what to do if, like United, you find yourself in the middle of a crisis of monumental proportions:

Crisis communications is not for the faint of heart. But, by remembering your marketing, PR, and social media fundamentals, your organization can weather the storm. Handle the crisis well, and your brand might even win a few brownie points with key audiences.

Oh, and by the way? I hear United is looking for a new PR manager.

You may like these other MarketingProfs articles related to Public Relations: