Are Surveys Dead? Five Ways to Breathe New Life Into Your Customer Research

Let's face it—no one enjoys filling out surveys. How many times have you received an email survey with the subject line "We value your opinion" or a similar trite expression? And how many times have you actually filled those out? Not many, we're betting—and that's because most people regard surveys as boring and tedious, offering no value to them.

For B2B marketers, that can pose a real problem for collecting customer preferences and opinions. How can we improve our product or service if we don't know what the customer is thinking?

For the most part, empathy and relevance are key to breathing new life into your customer research tools. It's possible for empathetic marketing, one of the top buzzwords of 2017, to make its way into something as yawn-inducing as a customer survey.

Here are five tips for getting better survey response rates and higher-quality responses.

Instead of copying and pasting the usual company spiel into the body of your survey email, really think about who your customers are and why they would want to fill out a survey.

Mia Mabanta, marketing director at news service Quartz, received a total of 1,797 responses for its 65-question Global Executives Study—a 55% completion rate that is significantly above the average.

"People in charge of companies get asked for things every day, nonstop. If some outside entity is going to try to steal away precious minutes that could otherwise be spent pursuing business objectives (or personal ones, for that matter), it had better give a good reason for doing so," says Mia.

"Instead of offering a financial incentive and risk getting hollow, rushed responses, we provided context and relevance, producing genuine, thoughtful responses."

This is the email Quartz sent to 500 senior executives: 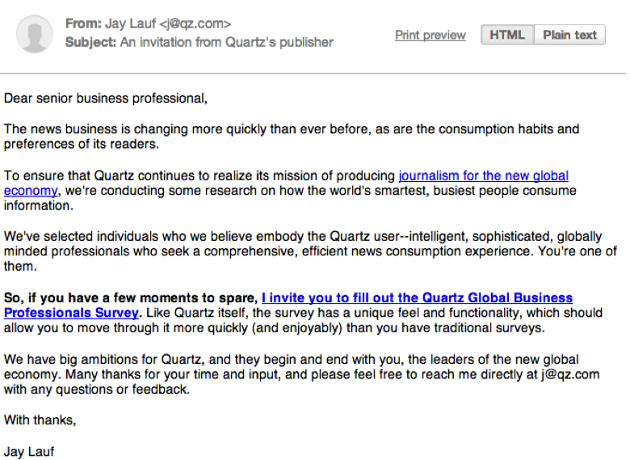 Quartz did a few things right here: It set the scene with the state of the news business, made the email relevant to the user by describing how executives consume information, and then made recipients feel special by using words such as "intelligent," "sophisticated," and "leaders of the new global economy."

Often marketers today focus so much on the medium that they forget the most important part—the message. Reboot your copy by considering why customers would care about completing your survey, and A/B test various versions.

2. Go where your customers are

The more steps that are in a process, the less likely people are to complete it, says Stefan Debois, CEO of Survey Anyplace. If your customers are primarily engaging with your brand on Facebook, why direct them to another webpage or medium?

Keep your audience happy by offering them the option to complete surveys natively within Facebook, your blog, your website, your product, or wherever they're interacting with your brand. Most survey providers will have social media embedding options, or you can simply use the basic survey functionality available in native platforms.

Stefan suggests that Twitter polls are a great survey tool if you're looking for something simple with a large number of responses: "By creating a hashtag and prompting your followers to tweet their answers to some question, you can quickly get a large number of answers about a question while simultaneously engaging your customers."

Offering a free pair of Bose headphones may seem like a surefire way to increase survey responses, but at what cost? Dana Severson, director of marketing at Promoter.io, mentions "guilt bias" as a reason for not offering financial incentives, particularly lottery-based ones. We unconsciously select more positive answers if we know a limited number of rewards are given out.

Instead of attracting the wrong crowd with monetary rewards, think empathetically and offer something of genuine value to your target audience—it could be an e-book to streamline their business processes, a webinar recording, or a month's free trial to test out your product.

Conversational AI, such as chatbots and voice assistants, has increasingly become the communication mode of choice for many consumers. SaaS startup Typeform has taken that trend to the next level by creating online forms that collect data in a refreshingly conversational manner, debunking typical "boring" survey stereotypes.

"There's a lack of empathy in the way most companies out there are asking people for data. The standard way for doing stuff is...you put a list of questions with boxes and people go through that. We think that the better way to do this is try and make it feel more like a conversation," says Typeform co-founder David Okuniev, who was inspired by the 1983 film War Games.

"There's a scene where Matthew Broderick is talking to the computer — he's interacting with a form, but it feels like a conversation. And that's more delightful than just filling in some boxes."

Bring this conversational aspect into your survey by adopting a quiz-like format, dialing up the visuals and, perhaps most important, simplifying the wording. 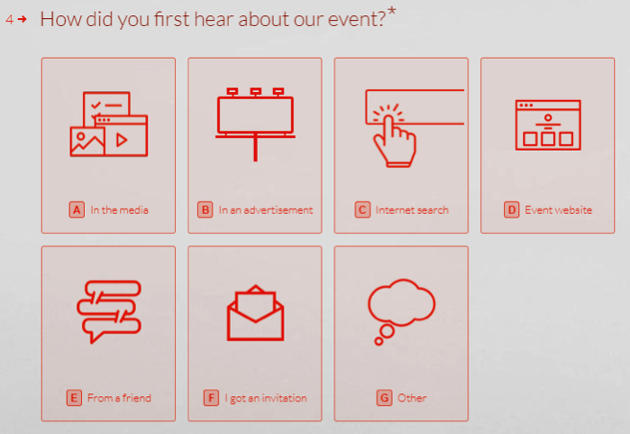 If you had to choose between paying upfront for a one-year subscription plan or paying the same amount in monthly installments, which one would you agree to? Most people would opt for the latter because smaller payments seem less daunting. Micro-commitment marketing plays into the same psychology by asking customers for a small commitment, such as sharing a social media post, rather than, say, purchasing a product.

The same logic applies when formulating surveys. Respondents are more likely to answer a yes/no or multiple choice question rather than open-ended questions. They are also more likely to answer if a question is posed simply, such as "What do you like about our company?" rather than "Which of our six company value pillars resonate with you and why?"

According to author and entrepreneur Ryan Levesque, even asking for a name and email address "sets off all sorts of warning bells."

"Instead of having the opt-in box appear right away on your landing page, give them a button to click instead, with a pop up to either a quiz, or a one-question segmentation option, and only then ask for their name and email. Button, question, and opt-in: 3 steps instead of just one big one," Ryan recommends.

Surveys are one of the most important digital touchpoints that brands can have with a customer. Getting them right can elicit valuable feedback to drive product and company direction. And with the above tips, you can save surveys from marketing oblivion.

Alissa Warne is marketing manager at Dassault Systèmes, a global 3D-software company. Alissa focuses on B2B customers in the mining sector and can be contacted at www.alissawarne.com.