Email Optimization and ROI: How to Get the Most From Every Email You Send

Raise your hand if you've received a package from UPS. (Cue everyone raising their hand.) Now, raise your hand if you've ever thought about the journey that box took to get to your front door. (Cue a lot fewer people raising their hand.) In most cases, it likely traveled hundreds of miles across multiple vehicles in just a few days—and, yet, the entire process cost less than a Starbucks Pumpkin Spice Latte.

So, how does UPS do it—and stay in business? The answer is both incredibly simple and overwhelmingly complex: route optimization.

Without going into the details of the company's logistical genius (you can read more about it here), UPS uses a sophisticated algorithm it calls ORION to give each driver optimized routes in real-time—and it's all based on prior route data and experience. Even better, the system observes how routes and traffic patterns change over time—and gets smarter to speed up the process.

The ROI of this optimization? In 2016, ORION-optimized routes saved 10 million gallons of fuel and an estimated $300-400 million in cost avoidance, according to UPS.

What Shipping Logistics Have to Do With Email Marketing

Now, we're not saying that optimizing driver routes is analogous to A/B-testing emails. But the process of optimization—and the value it can have on a business—is absolutely relevant.

If you dig into UPS's history, the company once relied on driver intuition and local knowledge to determine the best routes. If drivers believed they knew the best route to take, they had the freedom to take it—even if they were dead wrong. And while it might not hurt the business if one driver goes rogue a few times, the impact would be massive at scale. After all, a single dollar wasted in fuel across millions of routes a year adds up quickly.

With email marketing, the same is true.

Sure, it might not kill your efforts if a few emails don't perform optimally. But if there's a major snag in your strategy that you're not aware of—or an opportunity to drive higher conversion that you're completely missing—it can cost you significantly over time.

Simple Tips to Optimize Every Email and Maximize ROI

Research by The Radicati Group suggests over 205 billion emails are sent each day, and there are more than 2.6 billion email users. And those numbers are still increasing: The number of worldwide email users are expected to increase to over 2.9 billion by the end of 2019. That's equivalent to more than one-third of the world's population.

Those numbers speak to the incredible opportunity with email. But that opportunity is only as good as your ability to capture it—and stay ahead of everyone else who's competing for your customers' attention.

So, where should you start? Truthfully, email optimization can't be covered in a single online article, but here are some tips to consider—and an e-book to download with a full walkthrough of everything to consider as your building out your next campaign:

1. Use a trustworthy and recognizable "from" name

The from name is the field that appears first in most email programs; it's likely the first thing your subscribers look at when deciding whether to open an email (and we have the data to prove it). A successful from name will be recognizable and relevant to your audience, imparting trust and eliciting a desire to open.

Carefully consider the relationship between subscribers and your brand: Are they more likely to recognize the name of your brand/product, or the name of an individual at your company? A/B-testing over time can reveal the right approach for you (it may be a mix).

Preview text is a bit of copy that typically shows up underneath or to the right of the from name and subject line in a subscriber's inbox. It is alternatively referred to as snippet text or a preheader. 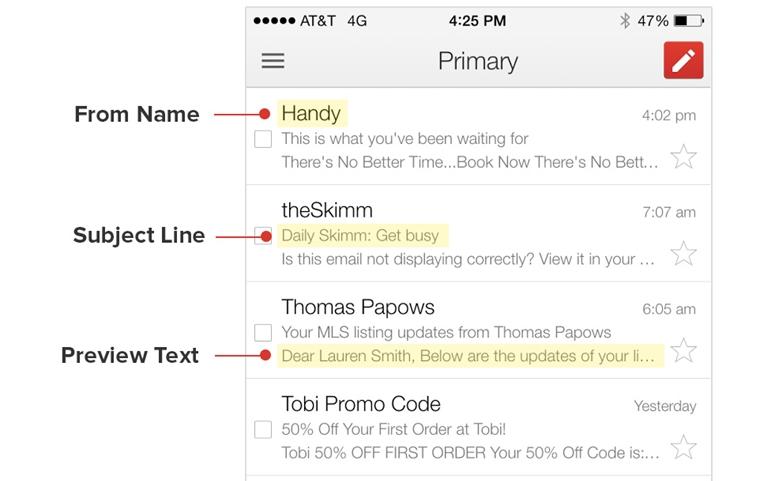 Preview text will be automatically pulled into the inbox based on content in your email, but it can also be planned ahead and used strategically to capture your subscribers' attention, encouraging them to open. Preview text can also influence behavior—encouraging subscribers to scroll and click specific content mentioned in the text.

Your subscribers have dozens of email apps to choose from. They can read your email on the Yahoo Mail app on their iPhone while on the subway, Outlook 2007 on their desktop computer at work, and Gmail on their tablet at home. Make sure you are creating emails that are optimized across all screen sizes.

And because 42% of emails are read on mobile devices, it's key to optimize your emails for mobile reading experiences. Consider streamlining your content, simplifying your design, increasing font sizes, and making your CTAs touch friendly. With CTAs specifically, it's critical to ensure there's plenty of white space around the button so that it's easy to see, focus on, and click (or tap).

There used to be a myth in the logistics industry that drivers should avoid any route that forced them to make left turns. The thinking was simple: Left turns usually require stops and more time. And more time means more idling (and fuel wasted). Yet, when UPS dug into its data more than a decade ago, it discovered that the industry's age-old assumption wasn't exactly true. In fact, in many routes, multiple left turns were more efficient than rerouting around them.

Email marketers would be wise to approach things similarly.

It's not that you want to remove intuition and creativity from your email strategy. It's that you want to validate any assumption with data. You might be right to assume that your customers prefer emails to look a certain way and to be delivered on a specific day—but you won't know until you validate that assumption.

That process can take time, but it's often the key to unlocking the highest possible email marketing ROI.

Want to learn more about email marketing optimization? Check out Litmus's Ultimate Guide to Email Optimization + Troubleshooting, a comprehensive look at optimizing every part of the email creation process. You'll learn how to define goals for each campaign, craft your content, optimize for the inbox, create great designs, avoid spam folders, and thoroughly test your emails. Download it here.

Litmus is the easiest way for teams to create great email for every subscriber, everywhere. Litmus is an email creation, testing, and analytics platform that empowers marketers and designers to confidently deliver superior customer experiences.