Although overall traffic declined slightly (-3%) to US websites in the health and medical category year-over-year from March 2008 to March 2009, some sectors experienced significant jumps in volume, most notably health insurance sites, which increased 11% YOY, according to a report by Hitwise entitled Diagnosing Online Health, published in May 2009. Health insurance sites represented nearly 8% of total sites in the health and medical category at the time of the survey.

The author of the report, Heather Dougherty, Hitwise's director of research, suggests that the rise in the unemployment rate and the worsening economy largely account for the increase in such visits.

Because the loss of a job in the US means the loss of employer-provided medical insurance, Dougherty suggests that one reason for the uptick in visits to health insurance sites was that greater numbers of the newly unemployed went there to research COBRA coverage and to compare the costs of individual health insurance policies. Another possible reason she suggests is that, as the economy worsened, increasingly greater numbers of workers began to fear layoff and visited such sites to check their benefits package so they could take advantage of their coverage while they still had it.

Starting in October 2008, when the economic climate worsened and layoffs increased, health insurance sites experienced a rise in visits:

Search Is Leading Driver of Traffic

Search is the leading driver of traffic to health and medical sites and accounted for 46% of the upstream traffic in March 2009. Overall, Google referred the majority of the traffic driven by search and represented 34% of the visits during March 2009. The three subcategories that received the highest share of visits referred by search engines were alternative, research, and information. Pharmacies and health insurance sites were among the least-visited in March in the health and medical category, receiving 34% and 26% of visits, respectively: 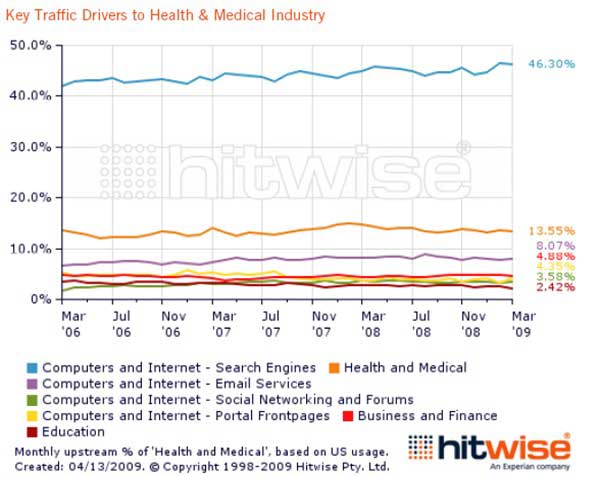 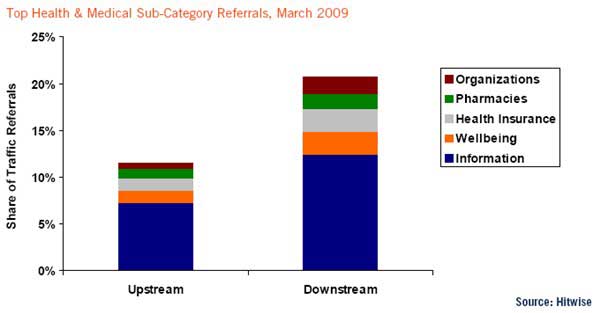 One of the most common destinations for many searches on the web is Wikipedia. The dynamic nature of the content on this site helps the entries on the website to optimize quickly and appear in the top organic search results for specific conditions: 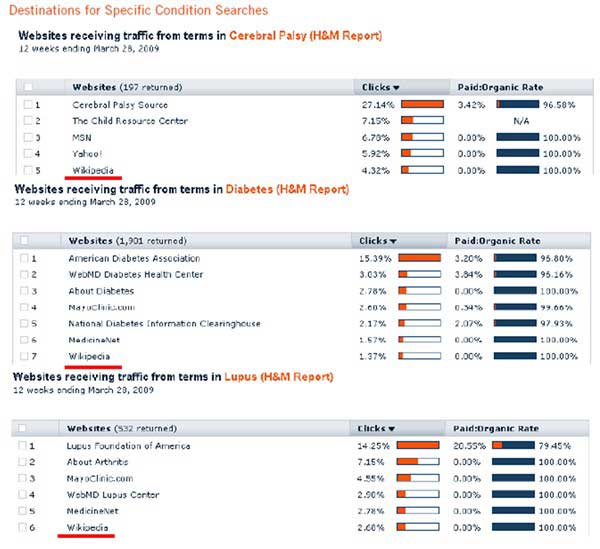 Wikipedia can also serve as a source of traffic to the health and medical industry because the website may be one of the first stops for an information seeker, before driving additional visits to more specific or specialized content. In March 2009, just over 2% of Wikipedia’s downstream traffic visited a website in the health and medical category.

Hitwise performed a custom analysis on the top 500 search terms driving traffic to the health and medical category to identify common themes within the search queries. The first categorization split the terms into two groups: branded (e.g., company or product name) and generic search terms. Branded terms was the larger group of the two and made up 57% of the share of total clicks among the top 500 search terms driving traffic to health and medical websites: 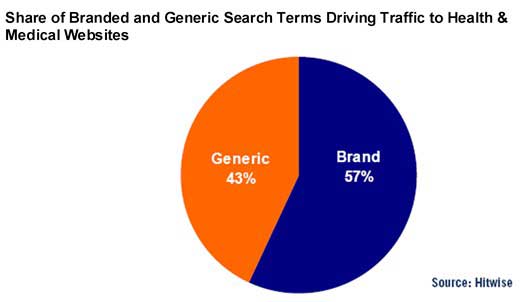 Among the branded search terms driving traffic to health and medical websites, 33% were the names of content providers (e.g. WebMD and Daily Strength), followed by retailer brand (e.g. CVS and Walgreen’s) with 17%. Searches for medication represented 11% and included both branded and generic drug names. Generic drugs were considered "brands" for the purpose of this research because consumers were using the specific name to search for information.

Searches for conditions and symptoms represented the majority of the generic searches at 62%. For the 12 weeks ending March 14, 2009, the top search terms in the conditions and symptoms category were shingles, diabetes, cerebral palsy, fibromyalgia, and herpes. Generic health-related terms (e.g., pill finder and medical diagnosis) and nutrition and fitness followed with 13% and 10%, respectively. 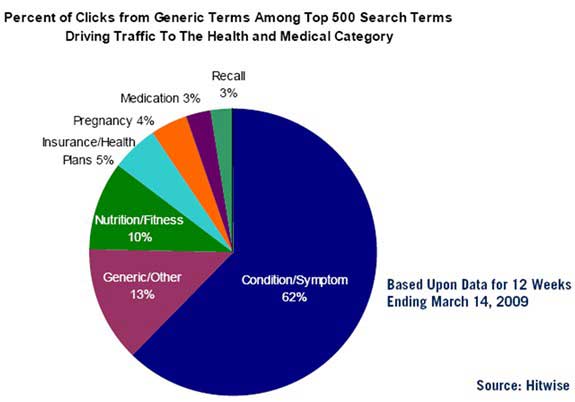 In the health and medical category, doctor and hospital referral and locator websites experienced a big jump in traffic. The market share of visits to a custom category of 18 doctor referral websites increased 49% in March 2009 compared with March of the previous year. Two sites, HealthGrades and UCompareHealthCare, captured 55% of all visits to the category in March 2009:

Considering the growth in the doctor referral category, there are many opportunities to capture traffic by optimizing organic search results, observes Dougherty. Overall, the category is still highly reliant upon organic search results; in Q1 2009, for instance, 91% of the search-referred traffic was organic. 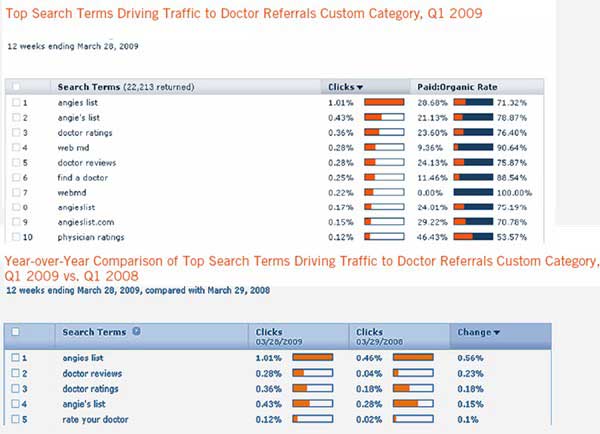 In terms of targeting the visitors to doctor referral websites, the composition of the audience tended to be older and less affluent during the first quarter of 2009 (12 weeks ending March 21, 2009). Nearly 32% of the visits to the doctor referrals custom category came from those aged 55 or over and slightly more than 50% reported earning $60K or less. The DMA with the highest share of visits was New York, followed by Chicago and Los Angeles: 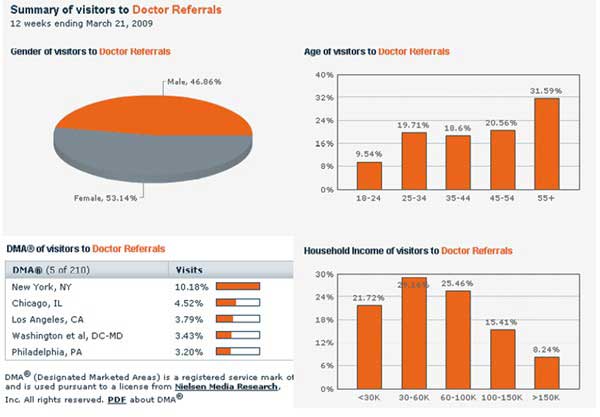 About the data: All data cited here comes from the Hitwise Report Diagnosing Online Health, published May 2009.