As mobile devices mature, consumers are shifting their online search habits away from the desktop toward mobile, and so changing the game for online advertisers and search marketers, according to research compiled from various sources by SEMPO's Emerging Technologies Committee.

That shift will offer new opportunities to more effectively target and convert consumers, SEMPO said. Some 64 million US wireless subscribers conducted mobile Internet searches in July 2009, compared with 37 million in January 2008, according to comScore: 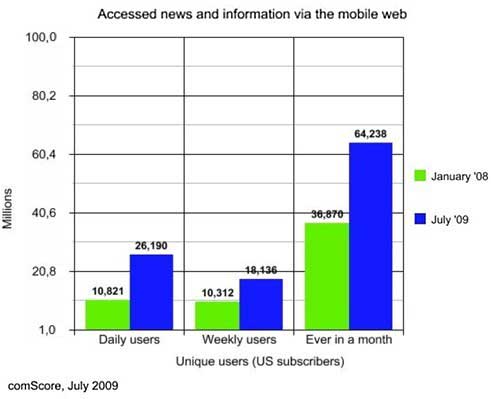 The number of mobile searchers in July '09 comprises more than 20% of the total US population, 28% of US wireless subscribers, and more than 30% of desktop internet users, according to the SEMPO report.

The accelerated growth of mobile Internet access will narrow the gap in numbers between desktop and mobile Internet users in the US by the early part of the next decade, projects eMarketer: 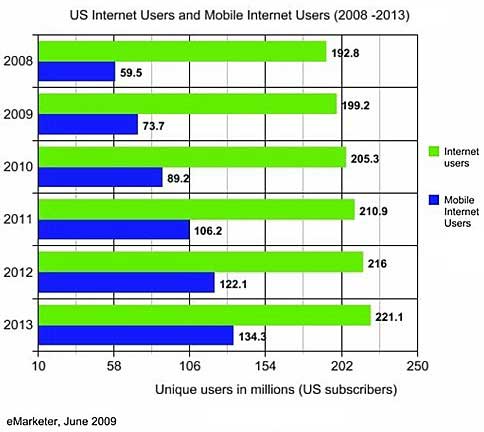 That prediction for the US market also indicates a global trend, according to SEMPO.

Although a tighter global economy has dampened earlier and more optimistic growth projections, global mobile advertising spending will rise from $3.8 billion in 2008 to $9.2 billion in 2013, PricewaterhouseCoopers (PwC) predicts in its "Global Entertainment and Media Outlook, 2009-2013" report.

The US will account for approximately one-third of that spending, making it the largest single-country market for mobile advertising, followed by Japan, with the total EMEA region roughly analogous in size to the US, according to the PwC report.

Mobile lends itself to direct response and branding

Mobile technology is unique in that it bridges the gap between the online and offline worlds, asserts the SEMPO report, according to which mobile advertising lends itself to direct response, ROI-driven efforts, and brand reinforcement and awareness campaigns that rely on multiple exposures to a marketing message.

Devices like the iPhone that offer a Web experience similar to a desktop computer are helping to drive the growth of additional mobile advertising opportunities, including search and display.

Approximately 15% of US mobile users own a smartphone, accounting for a disproportionate 50% share of mobile Web traffic. iPhone and iPod Touch account for 62% of Web market share as of July, according to StatCounter Global Stats: 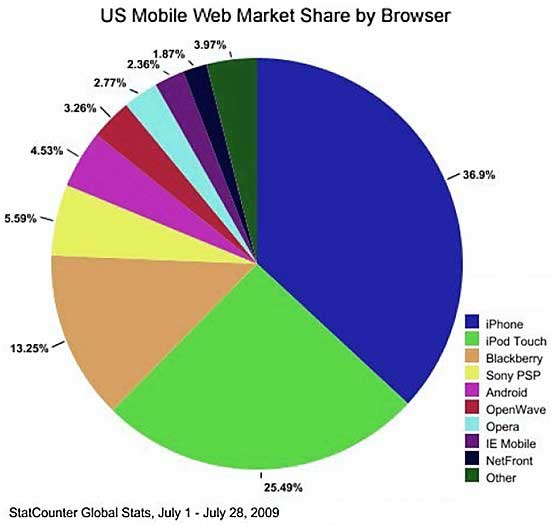 Although the mobile advertising market is relatively small, its potential for growth is great, with mobile networks reporting click-through rates of 5% to 15% on campaigns, compared with the desktop Web's average of 2%, reports SEMPO.

The higher conversion rates are likely the result of the powerful visual impact of a single ad on a small screen, as well as the targeting capabilities of mobile ad networks, according to SEMPO.

About SEMPO: The Search Engine Marketing Professional Organization is a global nonprofit organization serving the search engine marketing industry and marketing professionals engaged in it.