Smartphones to Overtake Other Mobile by 2012

Smartphone units sold worldwide in 2009 will grow 14.5% from 2008 levels, according to a forecast by Infonetics, which also anticipates a  21% compound annual growth rate (CAGR) in smartphone units from 2008 to 2013—significantly better than projections for other mobile markets.

Despite an expected revenue decline in 2009 due mainly to revenue erosion and lower-ARPU (average revenue per user) units coming to market, smartphone revenue will pick up in 2010 and continue growing, easily outstripping the combined revenue of standard mobile phones by 2012, Infonetics said. 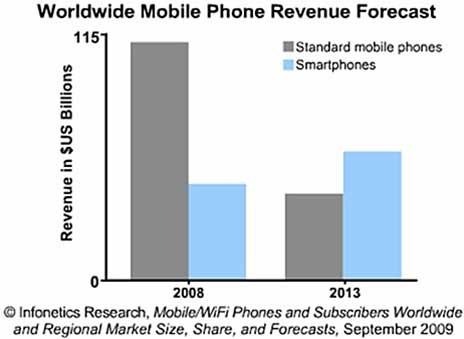 China's smartphone market grew in 2008 with a 30% increase in shipments over the previous year, according to separate research, from In-Stat. Smartphones accounted for 15% of total mobile phone shipments in China in 2008, up from 12% in 2007, In-Stat said.

Key drivers of the growth include mobile internet applications, GPS, and multimedia functionality, according to In-Stat, which said Symbian retained its leadership in the OS marketplace, with a small share increase in 2008, due to steady smartphone sales growth from Nokia and sales decline from Linux.

Mobile phone adoption has accelerated during the recession, with wireline-to-mobile substitution gaining strength, according to the Fixed and Mobile Subscribers market forecast report from Infonetics. 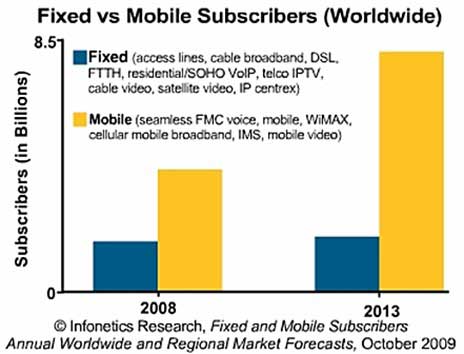 Access lines are disappearing fastest in North America and China, due to the move to fixed-to-mobile substitutions, the switch from copper to fiber lines, and the recession, during which many people ditch their landlines and keep only their mobile or smartphone, Infonetics said.

Some other findings from the Infonetics report:

China, which had half a billion mobile subscribers in 2008, and India together make Asia/Pacific the world's largest mobile subscriber region, and that's expected to remain so into the forseeable future, Infonetics said. The next largest is the EMEA region, with strong growth driven by Africa.

Continue reading "Smartphones to Overtake Other Mobile by 2012" ... Read the full article