Annual global advertising expenditure will have declined 10.2% by the end of 2009––the worst annual drop in modern times––but is forecast to stabilize and grow 0.9% in 2010, according to (pdf) projections by ZenithOptimedia.

Despite overall market weakness, Internet advertising is forecast to outperform traditional media this year with 9.5% annual growth, followed by 12% in 2010, Zenith said.

The course of market recovery is expected to follow that of the previous two economic recessions and strengthen steadily as corporate and consumer confidence improves, with 3.9% annual growth in 2011, followed by 4.8% in 2012. 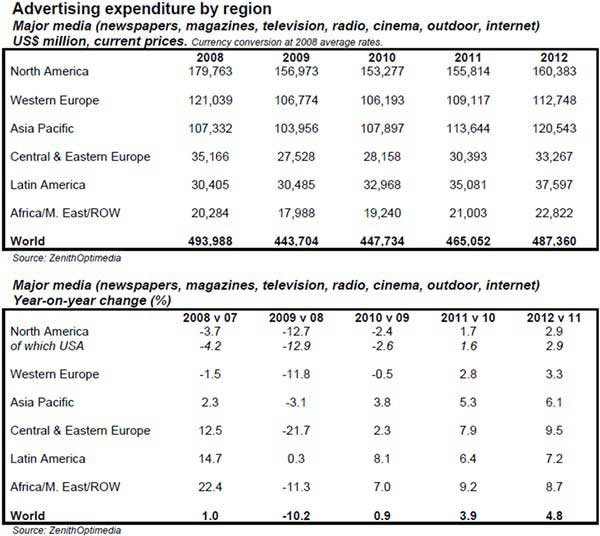 The North American ad market, along with other developed markets, including Western Europe and Japan, experienced substantially larger losses in 2008 and 2009 compared with other regions.

The recovery of the US market is forecast to lag behind world ad growth: A year-over-year decline of 2.6% is forecast for 2010, followed by a resumption of positive 1.7% growth in 2011.

The economic downturn has accelerated the structural shift of budgets from traditional media to the Internet––in favor of programs that generate rapid and clear return rather than the long-term brand-building benefits offered by other media.

Paid search is forecast to grow 15% globally in 2009 and continue at approximately the same pace for the next two years; by 2012 it will comprise 53% of Internet ad expenditure, up from 50% from this year.

In contrast, Internet display is forecast to grow 6% annually in 2009, while classified will be up just 2%.

The gap between the Internet and newspapers has narrowed from 26 percentage point five years ago to 11 points this year and is forecast to be just 4 points in 2012.The Internet is forecast to overtake newspapers to become the world's second-largest ad medium by midway through the next decade. 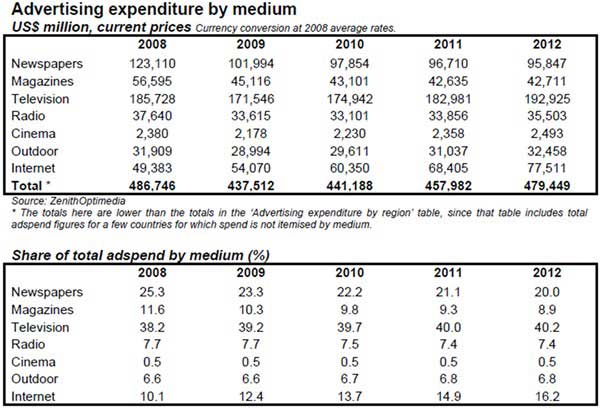 Newspapers and magazines have suffered the most during the economic downturn, and declines have been exacerbated by falling consumer interest and substitution of new media. By 2012 newspapers will have 26% of ad market share, and magazines 28%—both below their 2007 peaks.

Television has suffered less than other media: TV viewing increases during a recession and its brand-building power compliments the Internet's strength in generating response and sales. Although television ad spending is forecast to fall 7.6% in 2009, its market share will increase from 38.2% to 39.2%. TV is forecast to continue to outperform the market over the next three years.

About the data: Ad-expenditure projections are issued on a quarterly basis by ZenithOptimedia. The above information is based on projections issued in December 2009.