The smartphone market will climb to 37% of global handset sales in 2014, expanding from 16% of market share in 2009 to 37% in 2014, with emerging markets driving the growth, according to Pyramid Research.

The fastest-growing markets over the next five years will be Brazil, with a compound annual growth rate of 43%, followed by India (39%), Turkey (37%), and Nigeria (34%), Pyramid projects.
Latin America will be the fastest growing region overall, with a CAGR of 48%, followed by Africa (39%) and the Middle East (39%), the company said.

Smartphone adoption increased 16.7% in the Asia Pacific region during the same period, to 7% of market share up from 6% the previous year, Morgan Stanley said. 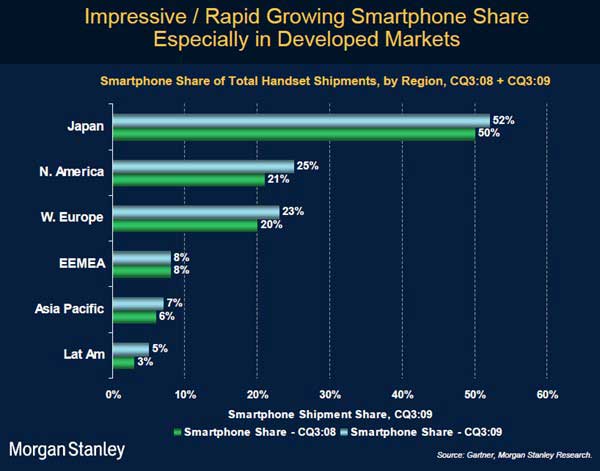 Based on past performance, Apple is in the "pole position" in the race to dominate mobile Internet computing with "two or three-year lead," Katy Huberty of Morgan Stanley is quoted by CNN as saying.

Although the iPhone and iPod touch constitute just 17% of the global smartphone market in the third quarter 2009, the two devices are responsible for 65% of handheld Web browsing, according to Net Applications, and 50% of all mobile app use, according to AdMob; meanwhile, Nokia's Symbian platform accounts for 45% of all mobile devices, but just 7% of the Web browsing share: 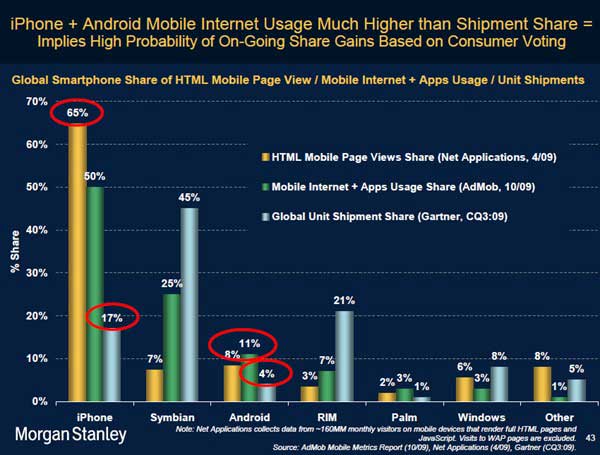