The television industry will close out 2009—a year dominated by shifting advertising budgets and a poor economy—with lower-than-expected revenues of $15.6 billion, a 22.4% decline from 2008, according to BIA/Kelsey. The significant drop also begins a leveling-off of television industry revenues to the mid-$10 billion level––not seen since the mid-1990s––through at least 2013, the firm forecast in its Investing In Television Market Report.

Below, additional findings and forecasts from BIA/Kelsey.

Television industry revenue for 2010 is forecast to increase slightly to $16.1 billion, of which $130 million in additional revenues will come from online advertising. 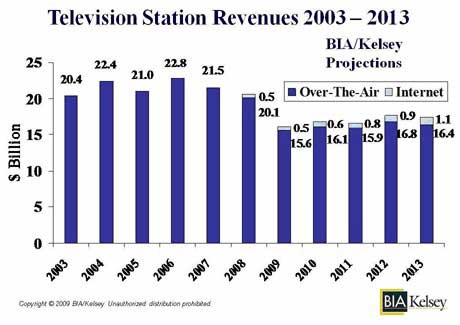 Continuous annual double-digit revenue growth from online channels, such as Internet and mobile, is forecast through 2013, when online ad revenue for the industry should surpass the $1 billion mark.

Although many regional markets did poorly in 2009, positive revenue growth, primarily due to state and local elections, is forecast for some regions in 2010, including the following:

"While television's numbers are tapering down due to audience erosion from other media delivery options, we continue to see that local TV remains a valuable way to reach relatively larger audiences, critical for mass communications in political campaigns, "said Mark Fratrik, PhD, vice-president, BIA Advisory Services.

"Additionally, online revenues are expected to grow as stations get more sophisticated in the way they sell to advertisers and integrate their mobile and Internet offerings with their broadcasting operations."

About the data: Forecast data are from the fourth edition of BIA/Kelsey’s "Investing In Television Market Report," published in 2009.