ZenithOptimedia revised downward its forecast for global ad expenditure growth in 2009 to -8.5%, from its April prediction of -6.9%, after Q1 came in below its predictions, the firm announced (pdf) this week.

The second quarter of 2009, however, was not quite as tough as Q1, and expectations for the rest of the year remain unchanged as signs emerge that the downturn is approaching its nadir, ZenithOptimedia said.

It anticipates a mild global recovery in ad expenditures in 2010, followed by a return to growth for all global regions in 2011.

The following is a summary of company's ad spend analysis and 2009-2011 forecast for various geographies and media. 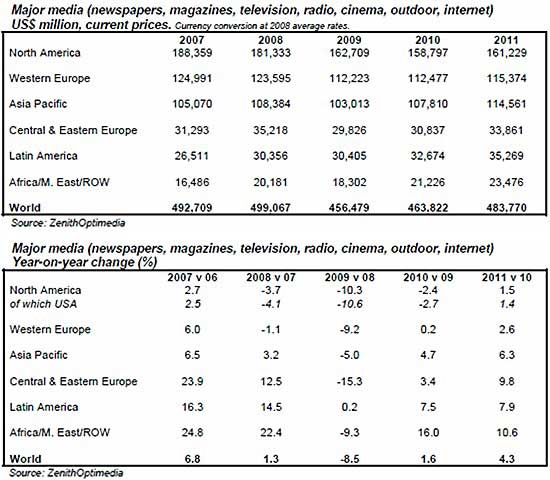 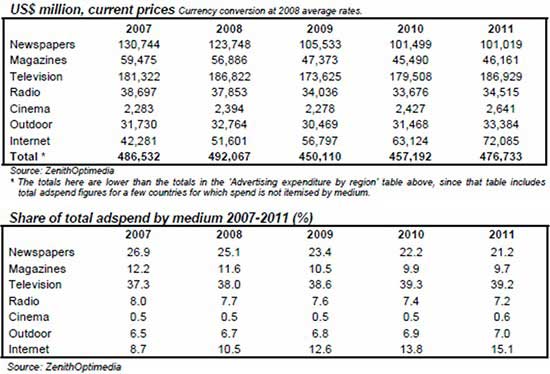 Internet advertising has held up even better than predicted in the previous quarter by ZenithOptimedia, its familiar virtues of transparency, accountability, and flexibility proving even more attractive in a recession:

Among the other media, television, cinema, and outdoor are forecast to decline less than the market as a whole, shrinking 7.1%, 4.8%, and 7.0% respectively.

Some advertisers, particularly in the fast-moving consumer goods sector, are taking advantage of cheap television and increasing their volumes, targeting higher market share. Cinema often does relatively well in a recession, providing consumers with escapist entertainment. Digital billboards and other non-traditional forms of outdoor are attracting budgets from other media by offering new types of eye-catching display.

Magazines face an even tougher time this year as luxury advertisers cut back severely: a 16.7% decline is forecast for 2009. But long-term prospects for magazines are brighter than those of newspapers, since the experience of reading a magazine is less easy to replicate on the Internet: Ad spend is expected to return to 1.5% growth in 2011, reaching $46 billion, 22.4% below its own 2007 peak.

The return to growth in 2010 and 2011 will bring no end to the pain of many big media owners, because competition for consumers' attention, and the ad revenue that comes with it, will only get more intense as the world economy recovers, ZenithOptimedia concludes.

New technologies are reducing entry costs, providing a lot of new competition for the established players: Television networks are losing viewers to digital channels and video websites; newspaper websites are losing readers to bloggers; radio stations are losing listeners to podcasts; and so on.