2009 US Digital Year in Review: ComScore

Despite the tough economic environment and unprecedented challenges to the industry, consumers' use of digital media climbed to new heights in 2009 as the Internet continued to evolve as an integral component of Americans' personal and professional lives, according to data from comScore.

Below, findings from the comScore 2009 US Digital Year in Review, which summarizes recent digital marketing trends and discusses implications for 2010.

The introduction of Bing in June 2009 enabled Microsoft to gain renewed traction in the search marketplace: During the course of the year, Microsoft Sites grew from 8.3% to 10.7% share of all search queries, with nearly all of the growth coming in the second half of 2009, subsequent to Bing's introduction. 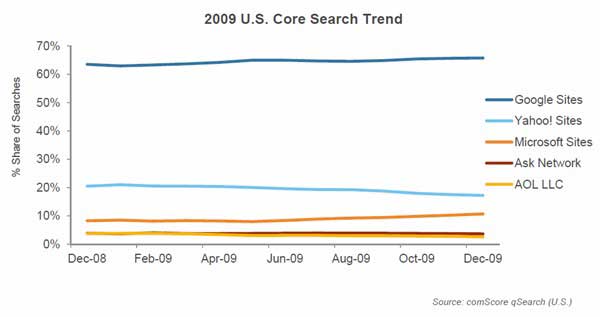 However, despite the new engine's initial gains, Google Sites continued to hold a strong lead in the US search market, accounting for 65.7% of all searches in December, up 2.2 percentage points from a year earlier.

Social networking continued to gain momentum in 2009, with nearly four out of five Internet users visiting a social networking site on a monthly basis, and Facebook and Twitter propelling much of the growth in the category. 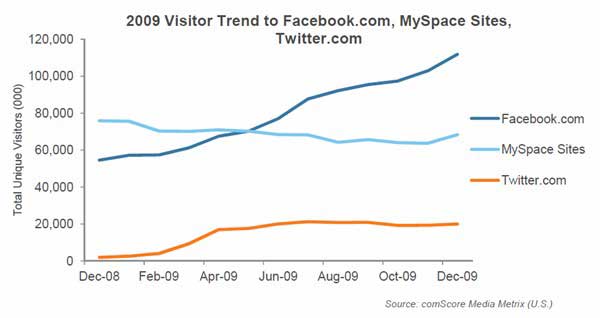 Meanwhile, MySpace's user composition shifted toward younger audience segments in 2009; people age 24 and younger now comprise 44.4% of the site's audience, up more than 7 percentage points from the previous year. 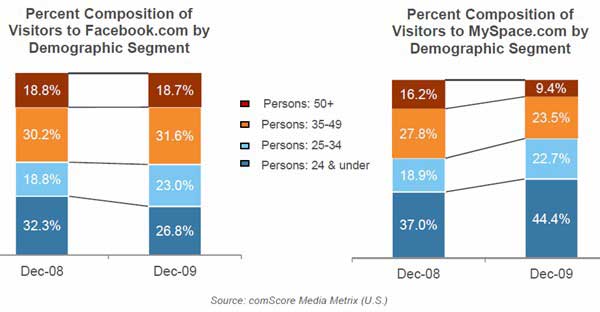 Facebook's audience, by contrast, was evenly split between those younger and older than age 35. The most noticeable demographic shift on Facebook during the year occurred among adults age 25-34, who now account for 23% of the audience, up from 18.8% last year.

The initial success of Twitter was largely driven by users age 25-54, who comprised 65% of all visitors to the site in December 2008, with those age 18-24 accounting for just 9%.

Despite Twitter's initially older skew, as it gained widespread popularity with the help of celebrity Tweeters and mainstream media coverage younger users flooded to the site in large numbers during the year, with those under age 18 (up 6.2 percentage points) and those age 18-24 (up 7.9 percentage points) the fastest-growing demographic segments.

Throughout most of the decade, e-commerce spending registered growth rates in excess of 20% annually, but in 2008 signs of softness were evident as the economy first began to weaken. Nevertheless, 2008 annual e-commerce spending grew 6% over 2007 levels.

However, in 2009 year-over-year growth rates remained negative throughout most of the year.

The heaviest individual spending day of the year was Tuesday, Dec. 15 ($913 million), the first day on record to eclipse the $900 million spending threshold.

US Internet users viewed a total of 4.3 trillion display ads (standard and nonstandard IAB ads, including both static and rich media, but not video) during the past year, up 21% from 2008.

Growth was driven by increases in ad reach (8%) and average frequency (12%).

The top 10 US online display advertisers during the year, ranked by number of impressions, included the following:

On the publisher side, Yahoo Sites served the most display ads in 2009 (521.2 billion), followed by Fox Interactive Media (which includes MySpace) with 367.6 billion, and Facebook with 329.6 billion.

Online video viewing accelerated in 2009, with 19% more people in the US viewing more videos for longer periods of time.

In December 2009, 86% of the total US online population viewed video content. Americans also viewed a significantly higher number of videos during the year, due to both increased content consumption and a growing number of video ads' being delivered.

Meanwhile, 52% of online viewing occurred at video sites ranked outside the top 25, suggesting the increased fragmentation of online video and the emergence of sites in the "long tail."

Among smartphone operating system (OS) platforms, RIM retained its lead with 41.6% market share, followed by Apple at 25.3% (up 8.5 percentage points from the previous year), and Microsoft at 17.9%. Google's OS share (5.2%) gained considerably in the final months of 2009; it is poised for continued growth in 2010 with the introduction of new devices featuring the Android platform.

About the data: Findings are from the comScore 2009 US Digital Year in Review.