Despite the buzz around application stores tied to specific mobile devices such as the iPhone and the BlackBerry, carrier app stores are alive and well in the US: one-half (50%) of all mobile apps consumers accessed carrier app stores at the end of 2009, according to Nielsen's new App Playbook.

Nevertheless, the Apple App Store was the clear leader among app stores in the US, accounting for 25% share as users' primary app store in the fourth quarter of 2009.

The relatively new BlackBerry App World Store was the second-most popular app store (16%) due to BlackBerry's industry-leading installed base.

The Palm Application Store (1%) languished due to the relatively modest success of the new Palm Pre and Palm Pixi, combined with a comparatively low number of apps available in its store. The same is true for the Windows Marketplace (4%), which is also suffering from a low number of apps and dwindling market share of Windows Mobile devices.

The Apple App Store (84%) and the Android Market Place (81%) have sizable leads in customer satisfaction compared with other application stores: 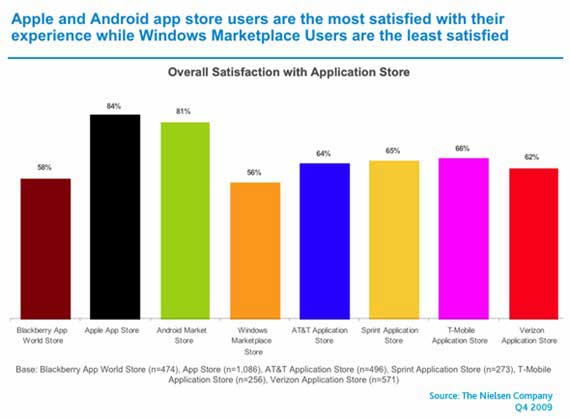 Carrier app stores lag behind the two leaders in terms of satisfaction—ranging from 62%-66%—but are still marginally ahead of the BlackBerry App World (58%) and Windows Marketplace (56%).

Installed Apps Base by Operating System 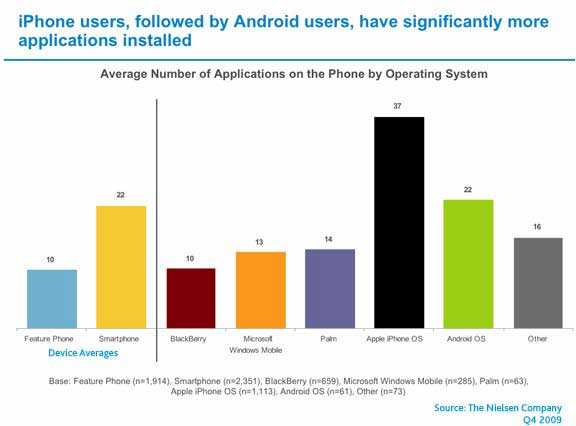 BlackBerry maintained its market leadership among smartphones in the US in the fourth quarter (37%), while Apple's iPhone continued to increase its market share (27%), especially after the launch of the iPhone 3GS in June 2009. 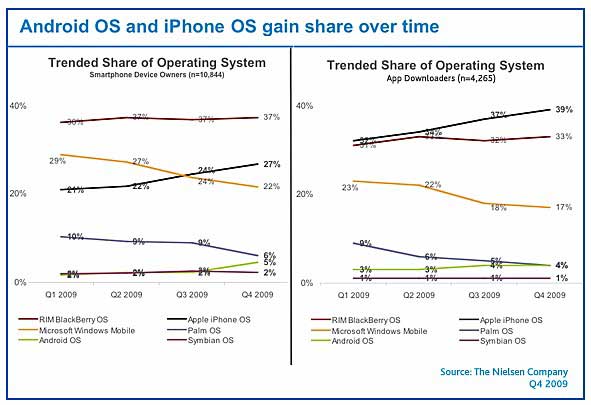 Android's share among smartphones reached 5% by the end of the year, driven by the launch of a significant number of Android devices in the latter part of 2009 and setting in motion a promising trajectory for 2010.

Both Microsoft and Palm were unable to capitalize on their new launches in 2009 of Microsoft Windows Mobile 6.5 and the Palm Pre and Pixi, each losing market share in the fourth quarter—down 7 points and 4 points, respectively, from first-quarter 2009 levels.

Symbian continued to struggle to make significant inroads in the US. Its share held at a modest 2% throughout the year.

About the data: Findings are from Nielsen's App Playbook, which surveyed more than 4,000 consumers who download applications in the US. The survey was conducted in the fourth quarter of 2009.