Though ad spending has softened in many sectors, the direct response ad—or infomercial—has registered 18% growth in total ad units since 2007 and now comprises 14% of all US TV advertising, according to a study from Nielsen.

That share is expected to grow as the format gains mainstream awareness, in part via the Web, Nielsen said.

Those homes watched an average of 32 ads during the week tracked, from among over 15,500 direct commercial units that aired across national TV in that period. 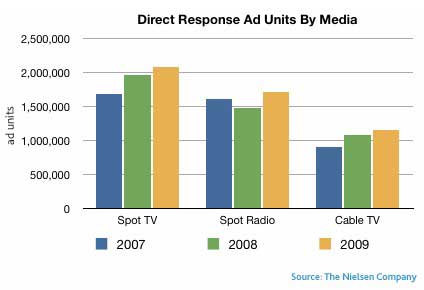 "One factor that makes direct response so attractive to advertisers is the ability to get that direct, and almost immediate feedback of how well the ad performed," said Kevin Svenningsen, SVP, Media Tracking Services, The Nielsen Company.