The stories and issues that gain traction on blogs, Twitter, and YouTube differ substantially not only from those that lead in the mainstream press but also from one another, according to a study by the Pew Research Center.

Each of the three social platforms studied has its own personality and function. For example, over a 29-week study period that included analysis of Twitter, blogs, Twitter, and YouTube just once shared the same top story—the civil protests that followed the Iranian elections during the week of June 15-19, 2010.

Across all three social platforms, however, attention spans are similarly brief: 53% of the lead stories on blogs stayed on top of the list for no more than three days. On Twitter that was true of 72% of lead stories, and 52% were on the list for just 24 hours.

Below, other findings from the study New Media, Old Media, from the Pew Research Center's Project for Excellence in Journalism (PEJ).

Bloggers gravitate toward stories that elicit emotion, those that involve the rights of an individual or group, or those that trigger ideological passion. During the 49-week study period that included analysis of blogs and YouTube, popular blog stories were often those that people could personalize and then share in the social forum—at times in highly partisan language. 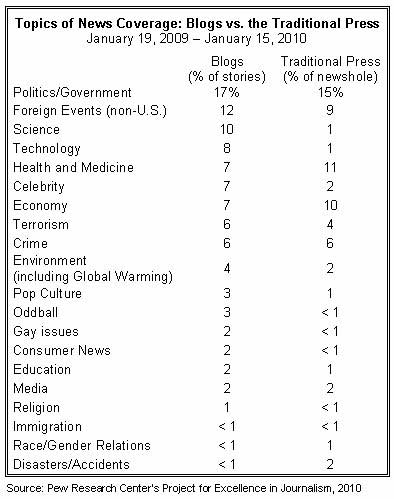 However, the next most popular subjects differed dramatically. In blogs and on social media pages, science stories (10%)—often offbeat findings—were the third most popular subjects, followed by technology-related news stories (8%), compared with traditional press's 1% and 1%, respectively.

Meanwhile, articles related to health and medicine (and economics were more important to readers of traditional press (11% and 10%, respectively) than to bloggers (7% and 7%, respectively).

Despite the unconventional agenda of bloggers, traditional media still provide most of the information to blogs: 99% of linked stories originated from legacy outlets, such as newspapers and broadcast networks.

US legacy outlets constituted 75% of all news items in the blogosphere, while Web-only sources made up less than 1% of links. 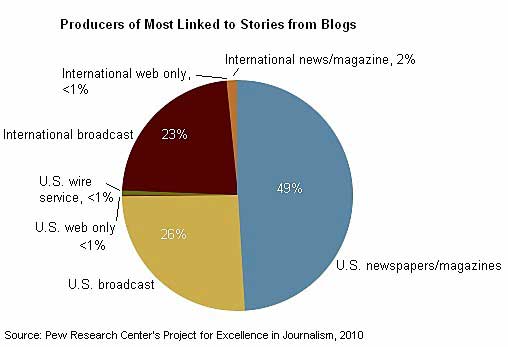 BBC News led the list of individual sources, accounting for 23% of the links studied, followed by traditional American media outlets CNN (21%), the New York Times (20%), and the Washington Post (16%).

Only one other non-US news site, The Guardian, received even 1% of the links.

Most bloggers linked to straight news accounts (87%) rather than editorials or op-eds (13%), while 83% of the links examined were to stories that were text-based, compared with 17% of stories linked to multimedia sources.

Some 43% of the stories that made the list of top 5 in a given week were technology-based, more than three times as many as the next largest topic. 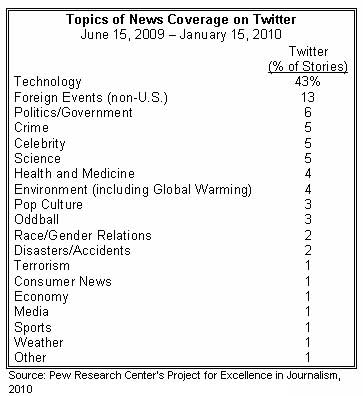 The environment on Twitter was found to be less overtly political than blogs', instead tending to espouse a more inclusive tone of community—a sense of its users being advocates for one another other and for the Twitter platform itself.

There were some instances of using Twitter to promote activism and involvement, but they tended to be episodic and involve special circumstances. Two such cases were the protests in Iran and the earthquake in Haiti, both instances where Web infrastructure was blocked or damaged.

The breaking news that trumped all else across Twitter in 2009 focused on the protests following the Iranian election. That story led on Twitter for seven weeks in a row—a feat not reached by any other news story on any of the platforms studied.

Contrary to authors of blogs, Twitter users linked much less frequently to traditional news sources: 50% of stories linked to from Twitter were to legacy outlets (30% to US legacy media), while 40% went to Web-only sites, such as Mashable and CNET. 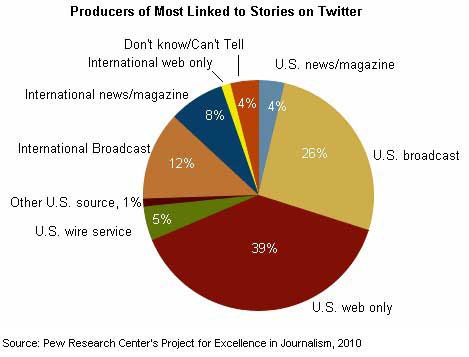 Non-US sites accounted for a similar level of the content on Twitter (22%) as they did on blogs, though less dominated by the BBC, which received 12% of overall links.

CNET (19%) received the most links from Twitter. Among those stories, 61% were technology-focused and 23% were business-related.

Overall, tweets were primarily linked to straight news accounts instead of opinion pieces, although to a slightly lesser extent than on blogs. On Twitter, 82% of the links went to news reporting, whereas 18% went to opinionated columns or stories.

In only eight of the 49 weeks studied was the top video about the same subject that also led the traditional media. Among those eight occasions, three involved footage of discussing the healthcare reform bill (often with contentious opposition) and two were videos about the protests in Iran.

Overseas affairs dominated YouTube videos during the study period: 26% of the top five most-watched news videos in a given week were about foreign events. Many of those videos were in foreign languages and were about issues that received virtually no attention in the US press or elsewhere in English-language social media. 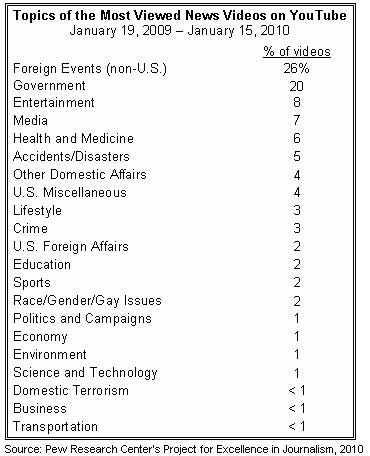 The second most popular subject on YouTube was government (20%). More than half of those (11%) involved President Obama or his administration.

The total number of people viewing popular clips is far greater than the number of people who tend to link to and comment on news stories. Top news videos are often viewed millions of times in one week. For example, the October CNN interview with the "balloon boy" family was viewed more than 2.5 million times that week.

Popular stories in the blogosphere, on the other hand, garner somewhere around 300 to 500 links in a week. But they do not tend to stay popular any longer. Just 9% of those videos remained at the top for more than one week, compared with 5% of top stories on Twitter and 13% on blogs.