One in Five US Drivers Unfit for Roads

Roughly 38 million Americans—or 18.4% of drivers on the road—would not pass a written drivers test exam if they were to take one today, according to results of 2010 GMAC Insurance National Drivers Test. 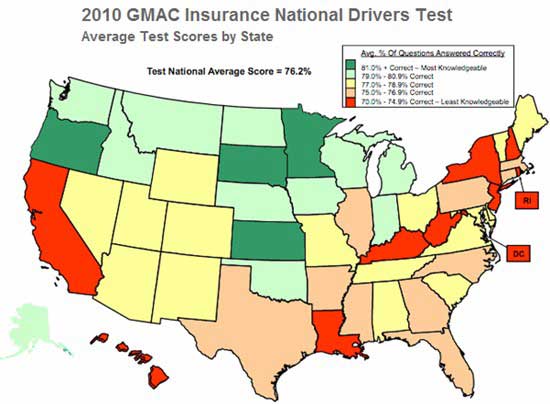 Below, other results of the GMAC Insurance National Drivers Survey.

Most Knowledgeable Drivers in Kansas, Least in New York

After dropping to fourth place last year from its No. 1 ranking in 2008, Kansas regained the top spot this year with an average driving exam score of 82.3%. New York drivers ranked last for the third time in the survey's six-year history (70.0%).

Conversation with other passengers is the leading distraction while driving, cited by 52% of surveyed drivers.

Roughly 25% of drivers say they drive while talking on a cell phone, eating and adjusting the radio, or selecting songs on an iPod.

Some 5% say they text while driving.

Overall, a significantly higher percentage of females than males reported engaging in the following distracting situations: conversation with passengers, selecting songs on an iPod or CD, adjusting the radio, talking on a cell phone, eating, applying make-up, and reading.

"It's discouraging to see that overall average test scores are lower than last year," said Wade Bontrager, senior vice-president, GMAC Insurance. "American drivers need to make safety a top priority and be aware of the rules of the road at all times. The National Drivers Test allows everyone to brush up on their driving knowledge with a brief refresher course."

About the data: The sixth annual GMAC Insurance National Drivers Test surveyed 5,202 licensed Americans from 50 states and the District of Columbia, gauging driver knowledge by administering 20 questions taken from state Department of Motor Vehicles (DMV) exams. Additional questions explored distracting habits such as texting while driving. The study was conducted by TNS.

Continue reading "One in Five US Drivers Unfit for Roads" ... Read the full article