Gamers are as passionate about their gaming consoles as auto buyers are about their cars, according to a survey from Ipsos Loyalty.

Gaming consoles and cars received the highest scores on the Ipsos Loyalty Satisfaction Index, 8.31 and 8.30, respectively. But consumers were relatively unsatisfied with their mobile telephone providers (7.51) and software operating systems (7.51). 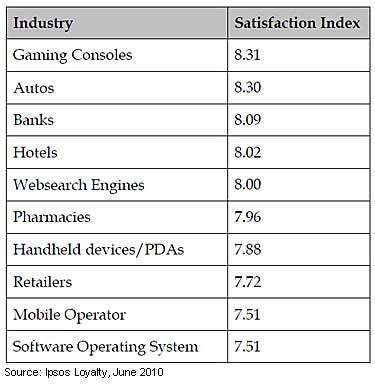 Across the industries studied, businesses that rely on face-to-face service tended to outperform technology-driven sectors. For example, banks came in third (8.09) in the study.

"Americans viewed their banks favorably," said Tim Keiningham, global chief strategy officer at Ipsos Loyalty. "The good news for banks is that despite the recent financial crisis, Americans tend to hold positive feelings about the place where they bank. Clearly, Americans distinguish between the bailout and the local branch of their bank."

Overall, however, Americans are most committed to their country, according to separate research from Ipsos Loyalty.

Asked to assess positive change in their loyalty toward 29 separate categories of people, organizations, products, and services, 70% of Americans say they are now more loyal to the USA than they were two years ago.

The positive change in loyalty to family is second  with 64% saying so, followed by loyalty toward doctors (58%), and the brand of cars driven (56%). 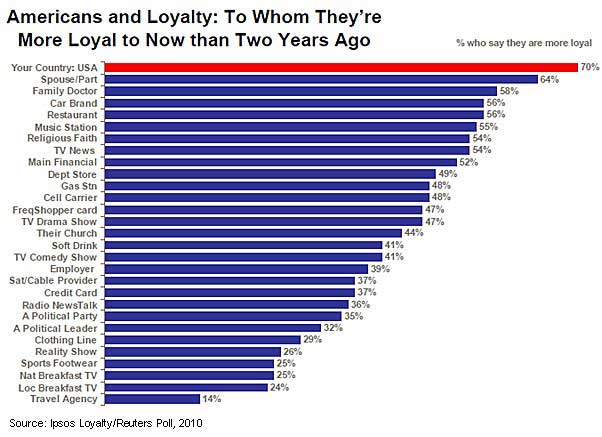 Interestingly, Americans are more loyal now than they were two years ago to their favorite department store (49%), TV drama show (47%), or soft drink (41%) than they were to their employer (39%).

In the marketplace, most (54%) consumers say they don't believe that brands do a good job of properly recognizing and rewarding loyal customers, the poll found.

However, 67% of Americans acknowledge that it's harder to be loyal to a brand nowadays compared with two years ago because there are so many choices available to them.

About the data: Findings are from the Ipsos Loyalty survey among 3,000 Americans conducted in May 2010. The Thomson Reuters/Ipsos poll was conducted March 2-3, 2010 among a national sample of 1,014 adults age 18+.