Large reductions in marketing budgets contributed to dismal sales performance in 2009, but companies are fighting back: Over three-quarters (72.5%) say they are increasing their marketing budgets in 2010, and over 9 in 10 cite customer acquisition as their top marketing objective in the next 12 months, according to the Lead Generation report from from CSO Insights.

Among surveyed companies, the top 3 marketing objectives for 2010 are the following:

Measured by the quality and quantity of leads generated, 62% of companies say email marketing is their top lead-generation tool, compared with 59% who said so a year earlier.

Live events and tradeshows ranked second (45%), followed by website registrations, which moved up to the No. 3 spot from No. 4 the previous year.

Social media broke into the top 10 of lead-generation programs. Meanwhile, new media (e.g., blogs, podcasts, mobile marketing) did not move up in rank.

Nearly two-thirds of companies (65%) say they will invest more marketing dollars on website design and content in the next 12 months, followed by email marketing (54%) and new media (52%). 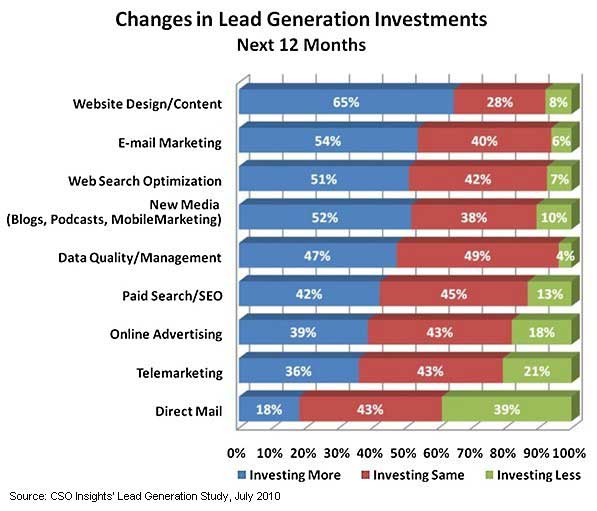 Data quality is also is a major concern: Only 8% of companies say the currency and correctness of their prospect data is 90% or greater. In response to that challenge, 47% of companies are increasing investments in data management.

Fully one-half (50%) of companies say they now have processes in place to track campaign ROI. The top 3 ROI metrics cited are the following:

You may like these other MarketingProfs resources related to Sales.

This infographic from RAIN Group looks at 10 skills that can help engage prospects, lead potential buyers through the purchasing process, and close sales.

The 10 Sales Behaviors That Are Deal-Breakers for B2B Buyers

B2B buyers say the sales behaviors that are the biggest deal-breakers are when a salesperson does not understand their business, talks too much, and is not supportive after a sale, according to recent research from Korn Ferry.

You Don't Close a Deal, You Open a Relationship

Today's business is no longer about getting new logos and ringing the sales bell—it's about keeping the customers you have. This article explains why closing a deal is only the first step in connecting with customers.

How the Pandemic Has Made It Harder to Close B2B Deals

Many B2B sellers say the COVID-19 pandemic has made it more difficult to close deals because buyers have put decisions on hold and/or reprioritized, according to recent research from Showpad.

Sales deals that are won tend to have shorter time frames than lost deals, more email communication, more meetings, and more stakeholder involvement, according to recent research from People.ai.

The State of Sales Coaching

Some 45% of salespeople say they've received less coaching than usual or no coaching since moving to remote work, according to recent research from ringDNA.