Google's Android mobile operating system (OS) is rapidly gaining market share in the US—particularly among new smartphone buyers—though it hasn't overtaken Apple's iOS, according to a report from The Nielsen Company.

Apple's iOS was the top mobile operating system in November 2010, accounting for 28.6% of the smartphone OS market in the US, holding on to the lead it won in the previous month, when it passed RIM to become the most popular OS in the US. 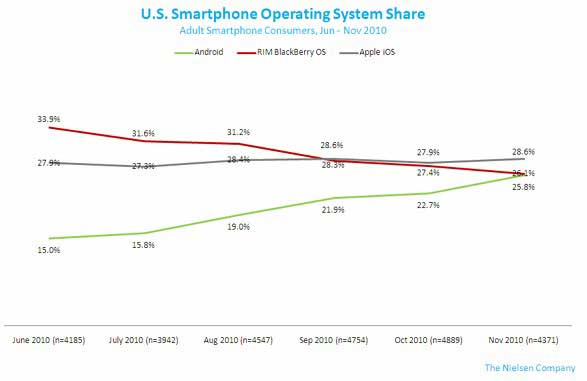 RIM's BlackBerry's ranked second, accounting for 26.1% of the OS market in the US—a level within the margin of error of both Apple iOS and Android.

"In other words, RIM remains statistically tied with both Apple for first and Android for third," wrote Nielsen. "Apple's clear lead over Android notwithstanding, this race might still be too close to call." 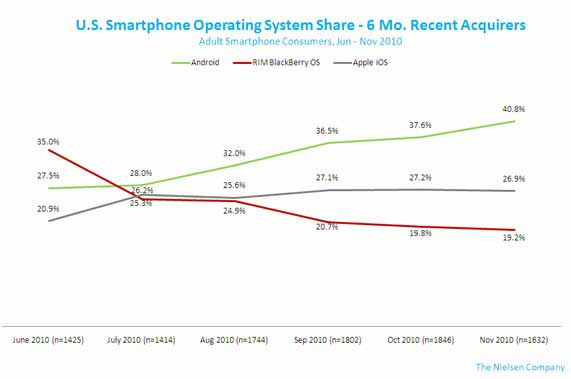 Apple followed with 26.9% of recent smartphone purchases, down 6.0 points from June, while 19.2% of new buyers chose the RIM BlackBerry, down 18.8 points from six months earlier.

All three leading mobile players, however, are benefiting from strong demand for smartphones: In November, 43% of recent acquirers bought a smartphone over a feature phone, underscoring how much room remains in market overall. 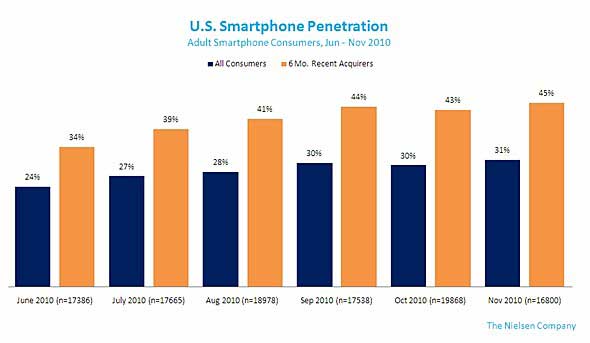 As smartphone subscriptions rise, so too are appetites for mobile apps, services, and the mobile Web. However, compared with other major smartphone operating systems,* Android users consume far more mobile data than users of other smartphones, according to separate research from Arieso:

* The Arieso analysis compares data consumption of users of newer smartphones, such as the BlackBerry Bold 9700, the Google Nexus One, the HTC Desire, the Sony Ericsson Xperia, and the Apple iPhone 4, against the iPhone3G as a "normalized benchmark."