Second- and third-generation Hispanics—American-born and English speaking—now account for the majority (60%) of the nation's Hispanic population, according to a new study by Yahoo.

However, among first-generation Hispanics, who account for 40% of the US Hispanic population, ethnic identity and language cues play a bigger role in advertising preferences.

Below, additional findings from a survey of 2,200 Hispanics in the US by Research & Insights at Yahoo.

Ethnic Identity Is Important to All Hispanics

Ethnicity is an important part of the past and the present for both first-generation and later-generation Hispanics:

However, later-generation Hispanics are less inclined to connect with and share their ethnicity:

However, there are subtle differences in ad preferences among Hispanic generations, particularly regarding depictions of ethnic identity—and the authenticity of ethnic ambassadors. 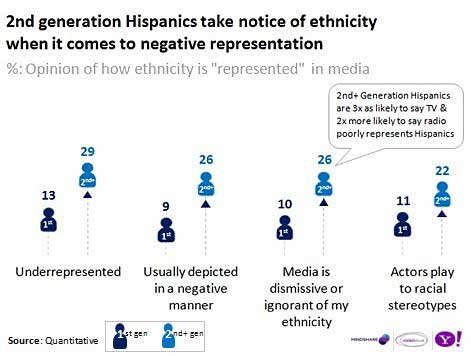 The Concept of 'Diversity' in Ads Is Key 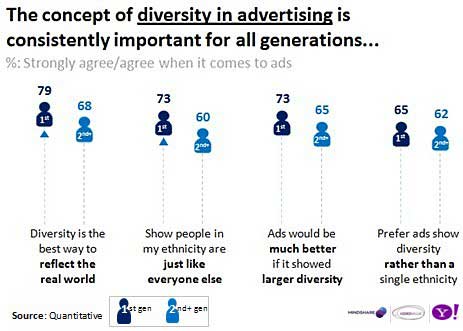 Among first-generation Hispanics, ethnicity plays a bigger role in advertising: 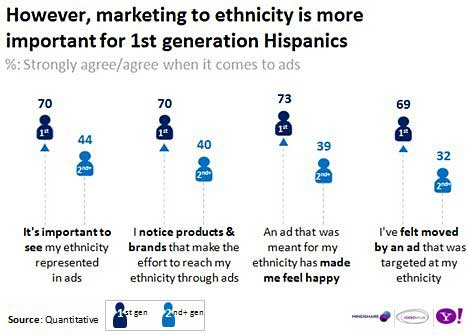 Hispanic Populations and Spending Power on the Rise

Between 2000 and 2010, the Hispanic population increased 43%; now one out of every six Americans in the US is Hispanic according to 2010 US Census data.

About the study: Findings are from a survey of 2,200 Hispanics, conducted by Yahoo Research & Insights in association with Mindshare and Added Value, November 2011.