Local online and mobile advertising revenues are forecast to reach $38.5 billion by 2016, up from an estimated $21.2 billion in 2011, a compound annual growth rate (CAGR) of 12.7%, according to BIA/Kelsey's US Local Media Annual Forecast.

Growth in the digital segment is expected to offset slower than anticipated growth in total local media advertising revenues. 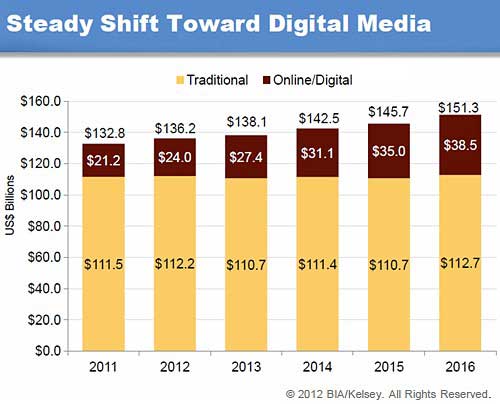 Below, other findings from BIA/Kelsey's five-year ad spending forecast.

Growth in local advertising will likely trail that of the overall economy: Total local advertising is forecast to grow at a 2.6% CAGR over the next five years, from an estimated 132.8 billion in 2011, to $151.3 billion by 2016.

Traditional ad revenues are projected to reach $112.7 billion by 2016, declining at 0.2% CAGR over the forecast period. 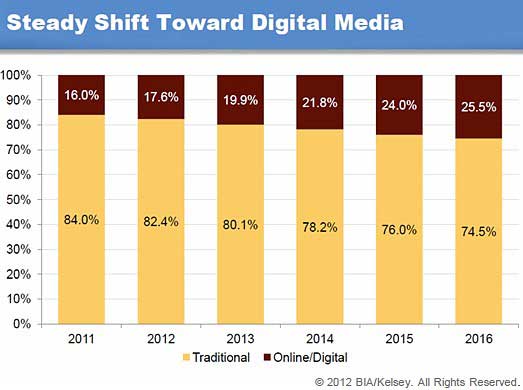 Economic activity has been weaker than expected, resulting in lower levels of local ad revenues.

The US economy remained slow through most of 2011, due to a variety of factors such as concerns about the European economic crisis, continued high unemployment, and the housing market slump. Those factors led to consumers and businesses "holding back" in their spending, according to the forecast.

"In October, we projected the total of the US local media market to be $135.9 billion in 2011," said Mark Fratrik, vice president and chief economist, BIA/Kelsey.

"But we now expect it to be $132.8 billion. Based on the changes in our estimates going forward, we expect the overall local media market will grow a bit more slowly over the next five years."