Long-form content—defined as videos lasting longer than 10 minutes—accounted for more than one-half of the total time people spent watching online video across all connected devices in the first quarter of 2012, up from 25% six months earlier, according to Ooyala's Global Video Index Report.

Long-form content now dominates viewing via connected TVs and games consoles—but is increasingly popular via tablets and smartphones, according to the report: 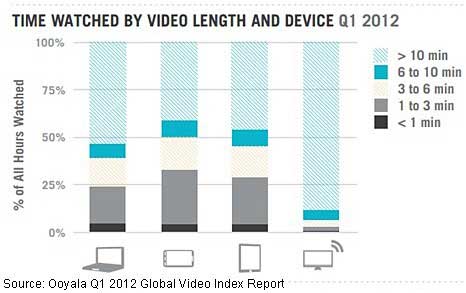 Below, additional findings from Ooyala's Global Video Index Report for the first quarter of 2012.

In addition to watching more long-form video, people are watching each video for longer periods across PCs, smartphones and tablets.

Tablets recorded the strongest growth, with time per play up 58% during the quarter, while time per play via smartphones and PCs grew 36% and 24%, respectively. 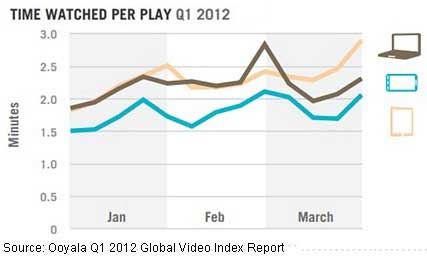 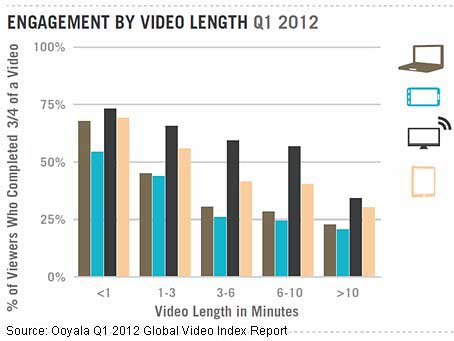 Video viewing behaviors vary during the day and week.

On weekdays, tablet viewing rises in the morning as people commute to work, and dips back down as PC viewing picks up. On a typical weekday, one-third of tablet video plays occur from 7:00 pm to 11:00 pm, while roughly 17% of PC plays occur over that period. 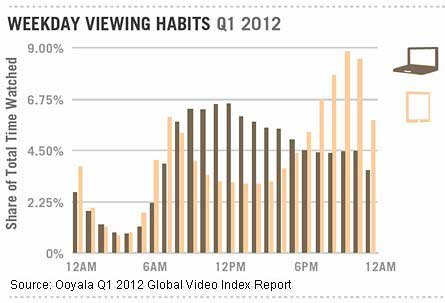 Smartphone and Tablet Use

Overall, the share of video watched on non-PC devices such as tablets, smartphones, gaming consoles and connected TV devices has tripled in the past nine months alone, Ooyala found.

Across all video formats, the total share of time watched via smartphones grew 41% in the first quarter over 4Q11 levels, while the share of time spent watching via tablets grew 32% over the same period.

Many video publishers are looking beyond clicks and plays, and instead focusing on individual engagement levels, identifying "power viewers" and optimizing ad levels for viewers who consume longer videos.

Among users who watch video when they visit a domain or use an application, roughly 55% watch one video over the course of a given day. At the other end of the spectrum, 10% of the publisher's audience tend to be highly engaged "power viewers," watching 5+ videos during the day.

About the report: The data in this report was collected from January 1 to March 31, 2012, among an anonymous cross-section of Ooyala's customer and partner database, consisting of broadcasters, studios, cable operators, print publications, online media, and consumer brand companies in over 30 different countries. Collectively, more than 100 million unique viewers watch an Ooyala-powered video every month in 100 countries across roughly 5,000 unique domains. The data are not intended to represent the entire Internet or all online video viewers.