Humorous ads consistently resonate best with viewers, regardless of the state of economy or year, according to a report by Nielsen, which examined the advertising effectiveness of more than 4,000 ads before, during, and after the "Great Recession." 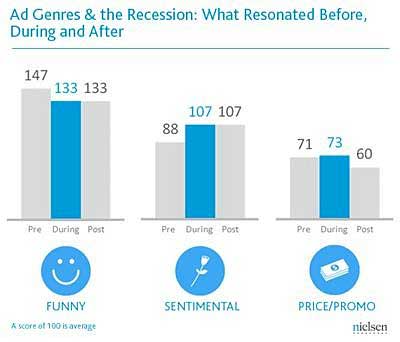 During the recession, there was a notable lift in the effectiveness of sentimental ads, whereas ads focused on product features and promotion/price did not resonate well with viewers—even during tough economic times.

Moreover, the overall performance of narrative and sentimental ads has improved since 2006.

Below additional findings from Nielsen.

Even as many markets continue to face tough economic realities, there's much at stake for advertisers: Global consumer spending is forecast to exceed $450 trillion over the next 10 years, according to the report.

In 2011, worldwide ad spending totaled $488 billion, of which $72 billion was spent on US television alone.