What Are the Top Nonprofit US Brands?

The Girl Scouts of the USA, Best Friends Animal Society, Stand Up to Cancer, American Red Cross, and Goodwill are among the top nonprofit brands within their respective categories, according to the Harris Poll Non-Profit EquiTrend brand-equity tracking study that measures and compares the health of some 87 nonprofit brands.

The Girl Scouts organization, which turns 100 this year, is the top youth-focused nonprofit brand of year, according to Harris. The brand is also the second most familiar nonprofit organization overall, just behind the American Red Cross.

Reading is Fundamental (RIF) and Junior Achievement are the other youth-focused nonprofits that rank above the category average.

Best Friends Animal Society is the top-ranked animal welfare nonprofit in the Harris Poll EquiTrend study for the second year in a row. The Utah-based sanctuary for abused and abandoned animals also earns the highest score among all nonprofits in the 2012 study-reflecting many Americans' commitment to and respect for animals.

American Society for the Prevention of Cruelty to Animals (ASPCA), credited as being the United States' first humane organization, scores slightly behind The Humane Society on the ranking.

Among the seven distinct nonprofit industry groups, the health category is the largest and has the highest category average, an indication that these brands generally score better than other nonprofit groups measured.

Stand Up To Cancer, a charitable program of the Entertainment Industry Foundation, was first measured in the Harris Poll EquiTrend study in 2011. One year later, it has become the top health nonprofit brand, according to Harris. Make-A-Wish Foundation secures second place.

Notably, of the 14 brands that rank above category average, five focus on cancer (at least in part): Stand Up To Cancer, American Cancer Society, Breast Cancer Research Foundation, Leukemia & Lymphoma Society, and The Hole in the Wall Gang Camp. 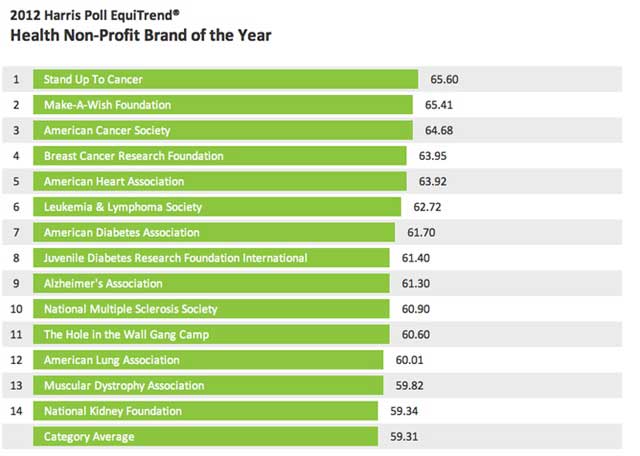 For its good works and strong branding, Harris named the volunteer-led humanitarian organization American Red Cross the top social service brand. Habitat for Humanity, the homebuilding organization, lands second, only a fraction behind.

As a worldwide relief organization, Food for the Poor is the international aid brand of the year.

The Wildlife Conservation Society, which Americans recognize as an effective protector of wildlife and wild lands, is the top environmental nonprofit.

About this study: Harris Poll EquiTrend is a Brand Equity tracking study conducted by Harris Interactive that measures and compares brand health for more than 1,500 brands. The study was conducted online from January 31 through February 20, 2012 and analyzed the responses of over 38,500 consumers on key measures of brand health, including how well members of the public knows a brand, how positively they think of the brand, and their consideration to do business with or donate to a brand.

Continue reading "What Are the Top Nonprofit US Brands?" ... Read the full article

You may like these other MarketingProfs articles related to Non-Profit: