When using Facebook apps, only 28% of people prefer to view standard banner ads, whereas 72% prefer viewing immersive and integrated ads—those that offer virtual rewards or currency, or interactive video ads that occur during natural breaks in an app or game—according to a survey conducted by Harris Interactive on behalf of MediaBrix: 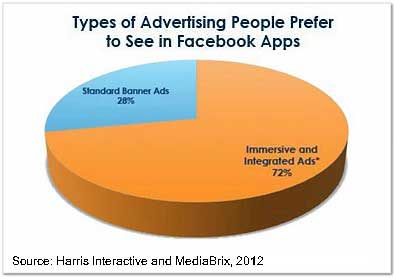 The study explores consumers' shifting preferences in media consumption, particularly in light of trends in social gaming, and mobile and online video consumption.

Below, additional findings from Harris Interactive and MediaBrix study. 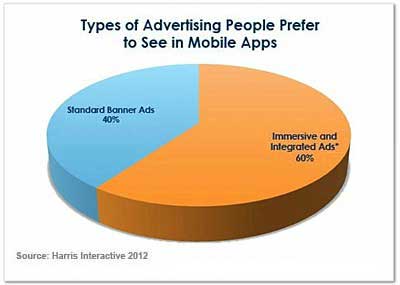 Similarly, the study underscores the importance of in-app video ads not preempting apps use:

Users would rather be shown ads that pay for an app: 87% of Facebook app users and 61% of smartphone owners say they prefer free apps versus apps they would have to pay for.

Acknowledging that app developers need to generate revenues, 83% of Facebook app users who prefer free apps say they'd opt for an ad-supported app, whereas 17% would favor in-app purchases such as virtual currency.

Consumers are rapidly adopting Facebook apps and mobile apps, according to the study:

*Immersive and integrated ad units include those that offer people virtual rewards or currency and interactive video ads that occur during natural breaks in the app or game.