Tech companies are increasing their marketing budgets a paltry 1.7% in 2012, roughly one-half the 3.5% bump they reported in 2011, according to the "2012 CMO Tech Marketing Benchmark Study" from IDC.

"The main culprit is the economy," wrote Rich Vancil, VP of IDC Executive Advisory Strategies, in a recent blog post. "Management teams are not willing to spend until better signs of demand pick up. The second factor is media shift: Going-to-market with digital vs. traditional media."

Below, additional findings from IDC's 2012 CMO Tech Marketing Benchmark Study, based on a survey of 91 tech companies conducted from May to August, 2012.

Software companies and smaller tech brands are the most confident

Digital allocations, as a percentage of total budget, continue to rise 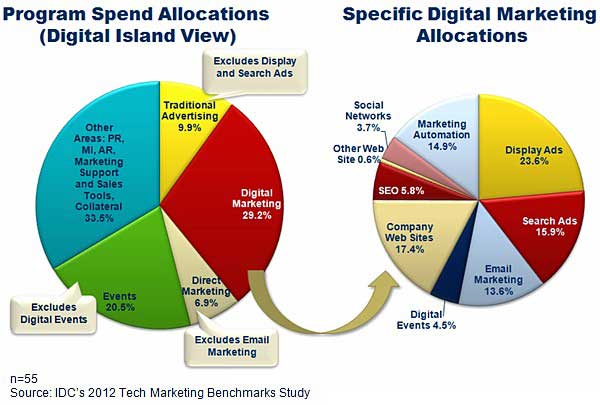 About the data: Findings are from IDC's tenth annual Tech Marketing Benchmarks Study, conducted from May 14 to August 15, 2012 among 91 technology companies representing roughly $750 billion in annual revenues. Hardware, software, and services brands with both direct and indirect channel strategies are represented in survey.