"Native" ads, those that give the appearance of being authentic content (Twitter promoted tweets, Facebook sponsored stories, etc.), can have a negative effect on the perceptions of brands that sponsor such ads, according to a study by MediaBrix.

Advocates of "native" advertising say the format is more effective than standard banner ads, and as key advantages they cite higher click-through and engagement rates because the ads are contextual and often more relevant.

Among online adults who had viewed such ads in the previous 12 months: 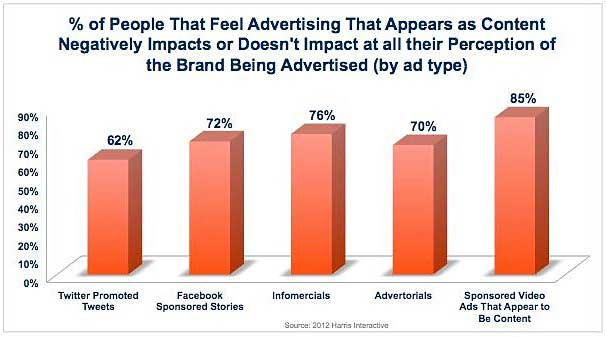 Below, additional findings from the MediaBrix study, conducted by Harris Interactive.

People find "native" ads to also be misleading. Among online adults who had viewed such ads in the previous 12 months: 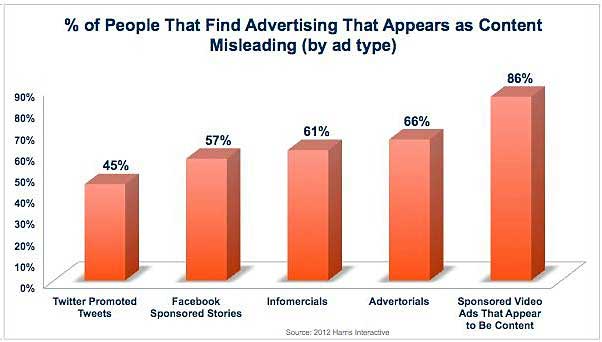 Those who had viewed traditional "native" ad types such as advertorials in magazines in the previous 12 months also found those ads misleading.

"This study validates that people respond best to authenticity in advertising no matter the format. With the recent buzz around 'native' ad formats, I think we need to carefully consider best practices," said Ari Brandt, CEO for MediaBrix.

"While anyone pushing the native ad agenda or otherwise would agree that we need to provide user experiences that are not jarring or disruptive, we also need to ensure that we are direct and honest with consumers about when they are being marketed to. Some formats achieve this better than others."

About the data: The survey was conducted online in the US by Harris Interactive on behalf of MediaBrix, among 2,516 adults age 18 and older, October 2-4, 2012.