Only 51% of US consumers are aware of digital wallet providers other than PayPal, even as electronic payment providers, mobile phone carriers, banks, and retailers themselves line up for a piece of the emerging digital wallet market, according to new data from comScore.

Moreover, only 12% of consumers surveyed say they've used a digital wallet service other than PayPal.

When consumers use a digital wallet via mobile device, the transaction can be as simple as holding up a smartphone to a digital reader at a merchant's cash register.

Among digital wallet services, PayPal boasts the highest awareness and adoption among US consumers: 72% say they're aware of the service, and 48% have used PayPal.

Even so, the digital wallet market opportunity could eventually reach one out of two consumers as audiences become more aware of the offerings and educated on their benefits, the study found.

Security is a top consumer concern; however a large portion of consumers are not aware of security features inherent in digital wallet use.

For example, though 93% of consumers would prefer to use a digital wallet that has to be unlocked before use, an average of just 57% across the brands studied realized—after having reviewed the digital wallet website—that a locking feature was available. 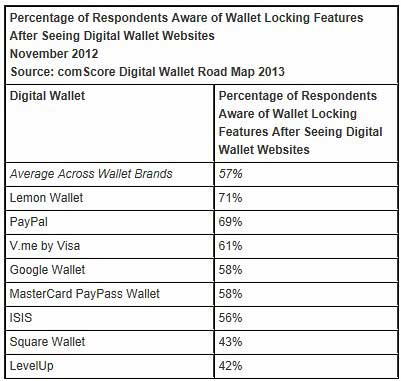 Even so, various digital wallet providers are more successful than others in communicating the availability of this feature, with 71% awareness among Lemon website visitors, compared with 42% among LevelUp website visitors.

The ability to improve communications of features addressing consumer concerns, such as security, could remove an important hurdle to adoption, comScore notes.

Consumers have fairly wide-ranging preferences around how they'd like to use digital wallets, according to data from the same survey, released in December 2012: 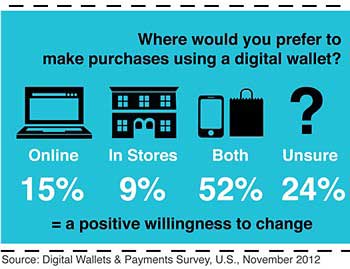 If shopping in-store, various methods can facilitate the checkout process and consumers cite the following as those they'd prefer most:

Most (64%) consumers say they'd use their PC or laptop to make payments using a digital wallet; however, nearly one-half (46%) would use their mobile device and one in five (18%) would use a tablet: 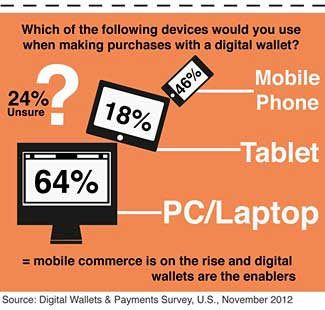 "Digital wallets represent an innovative technology that has not yet reached critical mass among consumers due to a variety of factors, including low awareness and a muddied understanding of their benefits," said Andrea Jacobs, comScore Payments Practice Leader.

"This study delves deeply into the mindset of consumers with respect to their potential use of digital wallets, in addition to helping size the market opportunity. The study also provides guidance on how digital wallet providers, marketers, developers, and retailers can contribute to growing adoption of this technology," Jacobs added.

About the study: Findings are based on data from comScore's opt-in panel of 1 million US consumers and two separate surveys of more than 2,000 US Internet users conducted in November 2012. To better account for the intent of consumers to use digital wallets, the study first removed the awareness gap that existed between users and prospects by introducing respondents to various digital wallet offerings first-hand.