Though email messaging is an important part of the selling process, texting can be an effective way to supplement email and phone channels, according to a study by Leads360.

On average, sales prospects who receive SMS text messages during the sales process convert at a rate 40% higher than those who do not receive such messages, Leads360 found.

But timing is everything. Text messages sent after contact via telephone has been made improve conversions 112.6% over average conversion levels, whereas those sent prior to phone contact convert at roughly 4.8% below the average rate: 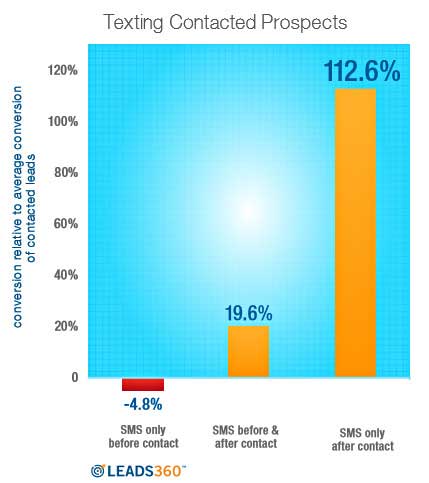 Importantly, sending text messages to a prospect before making contact on the phone decreases the likelihood of ever contacting that lead 39%, according to the report.

Below, other findings from Leads360.

For the same reasons that text messages can be a more effective way to communicate with sales prospects, they also have the potential to be interpreted as intrusive or in violation of one's personal domain when used for business purposes, Leads360 notes.

How many text messages should be sent?

Most organizations that use texting to communicate with sales prospects after they’ve made contact do so responsibly. Very few send more than three texts to a prospect after contact has been made, according to the report.

However, salespeople may consider sending as many text messages as the engagement requires. Sending three or more purposeful text messages after contact has been made with a prospect can increase conversion rates 328%:

About the report: Findings are based some 3.5 million lead records from more than 400 companies from a wide variety of industries, generated in the frst half of 2012. The organizations represented were randomly selected Leads360 customers. Milestone, call, and text data for those leads was collected through the end of the third quarter in order to allow enough time for contact and conversion.