People are watching more video content with their mobile devices: The proportion of total time spent watching online video via tablets and smartphones reached 8% at the end of December 2012, double the 4% recorded a year earlier, according to the 2012 Year-End Video Index Report by Ooyala. 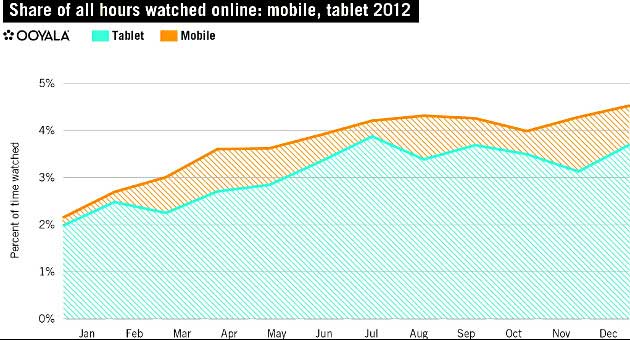 Below, additional findings from Ooyala’s 2012 Year-End Video Index Report, which captured the online viewing habits of more than 200 million unique viewers for each month in 2012.

Despite the market dominance of Google Android smartphones, Apple’s iOS dominates video viewing, accounting for 67% of the time spent viewing video via smartphone, compared with 33% for Android.

Live streaming broadcasts are still the most engaging format of video across all viewing formats. 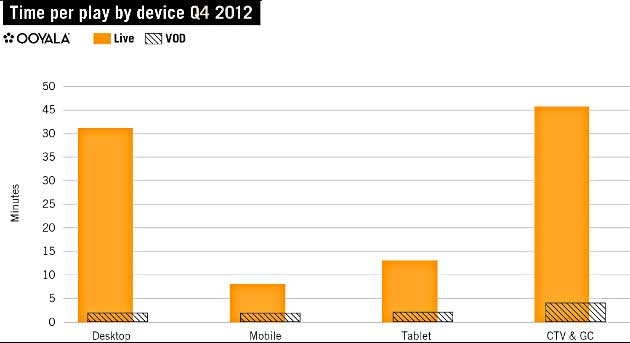 Viewers via desktop averaged more than 41 minutes of live video viewing, and those who watched via gaming consoles and connected TVs did so for 45 minutes, on average, according to the report.

Long-form content—defined as videos lasting longer than 10 minutes—accounted for 57% of the total time people spent watching online video on desktops in the final quarter of 2012. 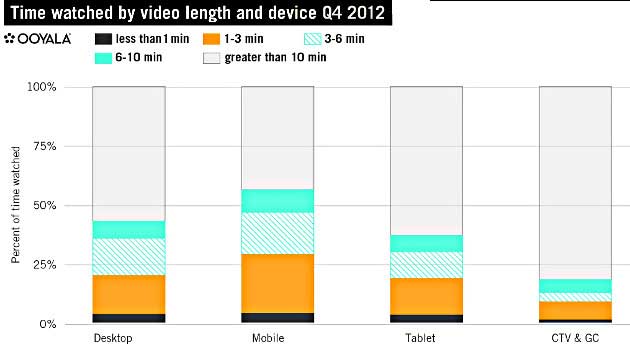 Among those who watched content with their gaming consoles and connected TVs, long-form content accounted for 82% of the total video viewing; tablet video viewers spent 63% of their total viewing time watching videos longer than ten minutes.

About the report: The data in this report was collected from Jan. 1 to Dec. 31, 2012, among an anonymous cross-section of Ooyala's customer and partner database, consisting of broadcasters, studios, cable operators, print publications, online media, and consumer brand companies in over 30 countries. Collectively, nearly 200 million unique viewers watch an Ooyala-powered video every month in 130 countries. The data are not intended to represent the entire Internet or all online video viewers.