Job prospects for direct and digital marketers have remained flat in the first quarter of 2013: The proportion of employers planning to add marketing staff over the next three months held at 47%, up only 1 percentage point from the previous quarter, according to Bernhart Associates' Quarterly Employment Report.

A year ago, that index stood at 52%, according to the report.

However, fewer employers now have hiring freezes, Bernhart reported, and the number of planned layoffs has stayed flat since the previous survey conducted in September 2012: 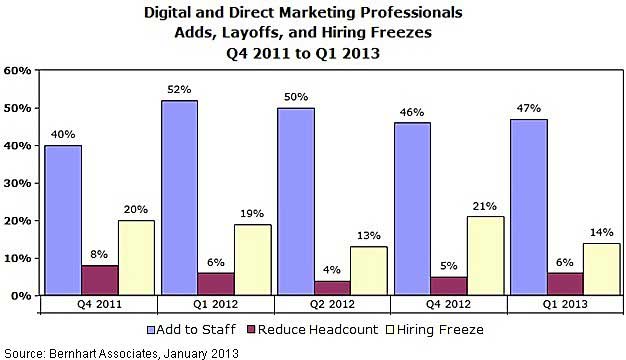 "If you even out the peaks and valleys we're at the same percentage level of new hiring as we were two years ago, so we're not gaining much ground," said Jerry Bernhart, leading direct and digital marketing recruiter and principal of Bernhart Associates Executive Search, LLC, which conducts the widely tracked quarterly hiring survey.

Below, additional findings from Bernhart Associates' Quarterly Digital and Direct Marketing Hiring Report for the first quarter of 2013.

Salary increases were modest in 2012. Among the companies participating in the survey, the average percentage wage increase awarded to salaried employees was 2.23%. By contrast, the US consumer price index for 2012 rose 1.7%.

"Many candidates feel they're still under water, so pay has become a bigger driver for those who are looking to advance their careers," Bernhart added. "But when it comes to compensation, it is still generally a buyer's market for digital and direct marketing employers."

Most of the new hiring is coming from agencies and suppliers: 51% of those surveyed report plans to add to staff during the quarter, compared with 45% of in-house marketers.

As with previous reports, Web analytics-related candidates are expected to be in the greatest demand over the next three months, followed by positions in sales, creative, and product management.

Newer job titles such as "data scientist" and "digital content producer" were mentioned by employers in the first quarter survey as well, according to Bernhart.

"I don't think I've ever seen such a high percentage of digital and direct marketers who are 'passively' looking. That's good for companies looking for talent, but not so good for employers who hired and trained those employees" Bernhart added.

About the data: Findings are from the first-quarter 2013 employment survey by Bernhart Associates Executive Search, LLC among 338 marketing and advertising professionals, including senior executives and hiring managers, human resource officials, and other key participants in online and offline direct marketing, polled January 7-14, 2013.